Friday night, my first time at Mississippi Thunder Raceway.  Quite literally dozens of times driving by on Wisconsin Hwy 35, the track itself is hidden behind pine groves, hidden to the extent that when mentioned to my friends, the universal response was, "there's a racetrack there?".  It's been a long time since I've seen cars go really fast on a dirt track and it was a blast. 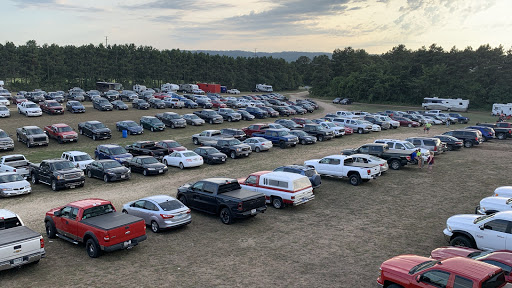 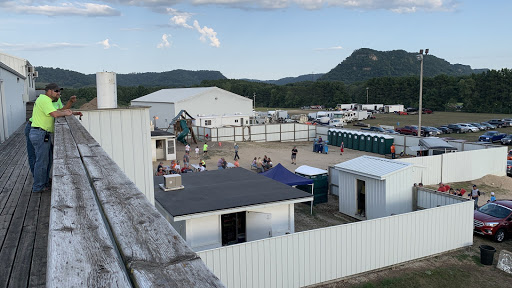 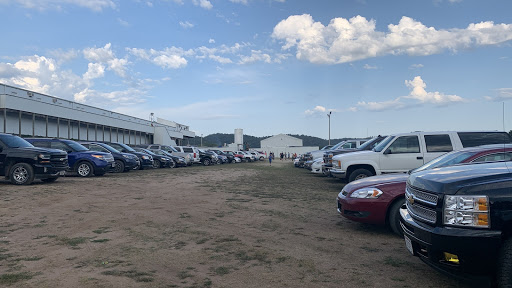 Eric met me there, we had a great time watching some very competitive driving of some very fast automobiles.  Worried that it was going to be miserably hot, it was a wonderfully pleasant evening.  We both got home before the worst of the weather hit; lighting in the distance was getting closer and closer. 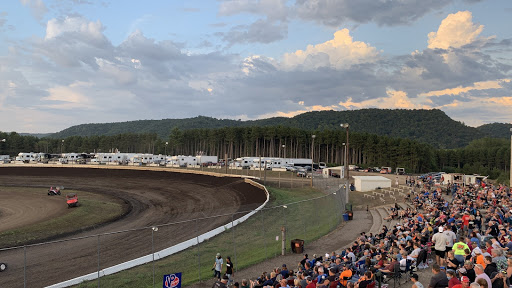 My Royal Enfield Bullet sidecar rig has recently had difficulty keeping the starter drive engaged but only on cold starts.  Warm, the bike is running almost before I can let go of the button.  Friday morning at the campsite, I was sure to park with some downhill available, just in case.  It finally caught but I wasn't convinced I'd get away without going the wrong way on the one way.

Weeks ago I had Marty at GoMoto order the sprag clutch, telling him that I was in no hurry...."a December job".  But these overnight camps are proving to be so rewarding, our autumn hopefully a long one, there was no way I was going to be able to wait for snow and bluster.  Saturday I tore into it. 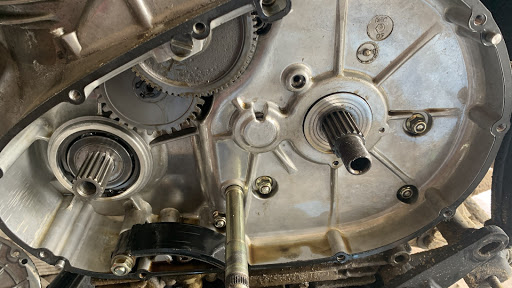 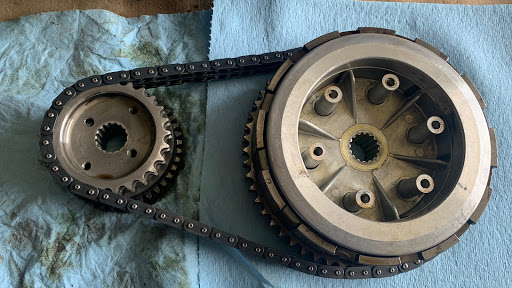 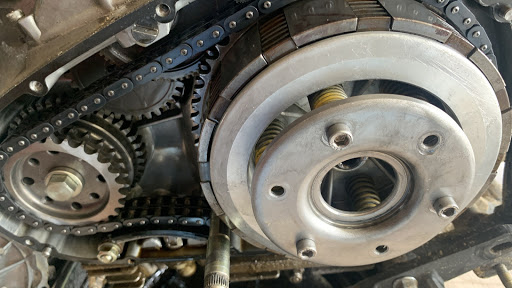 The lighting made the old piece(s) look like brass...or something but it was the light in the shop for some reason.  The new primary/sprag is just above, the front side and in one piece. 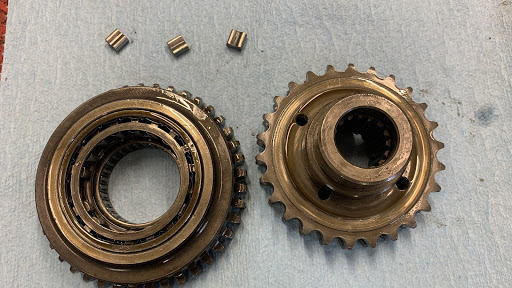 Sunday I decided to do some road scouting for our upcoming Wildcat Mountain Rally that isn't a rally this year.  Still, I plan to lead a ride or two of non-rally goers and some roads closed needed to be confirmed.  It so happened that Eric wasn't all that far away so he did a very good job of anticipating a proper and realistic rendezvous time at Rockton for chicken.  Back when I was spending time with the Sport Bike folks, we had a common route down to that part of Wisconsin.  Sunday I decided to follow it since I'd not been on some of the roads in quite some time.

Blank Hill Road...not all that long ago, lots of  'farming' was taking place here.  Now, some heifers in a single paddock.  The buildings empty, someone's working the land, a neighbor that IS still in business. 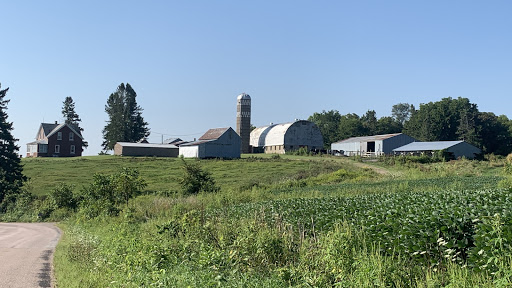 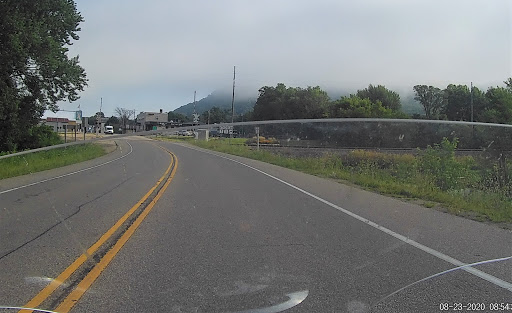 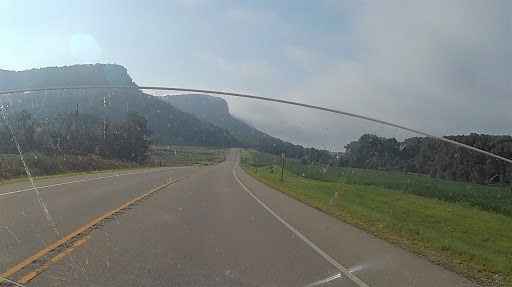 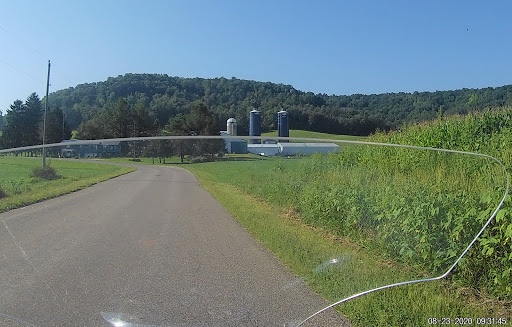 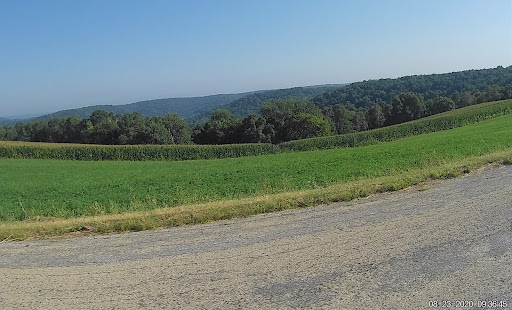 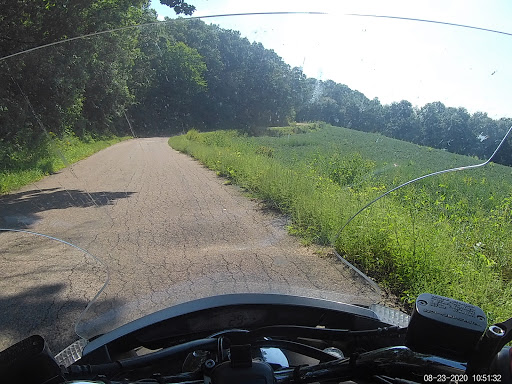 Through Ettrick, down Cty D, Cty T, into the town of Mindoro and on my way through the Mindoro Cut.  The last time I'd been there was with Ben when he was home on Leave. 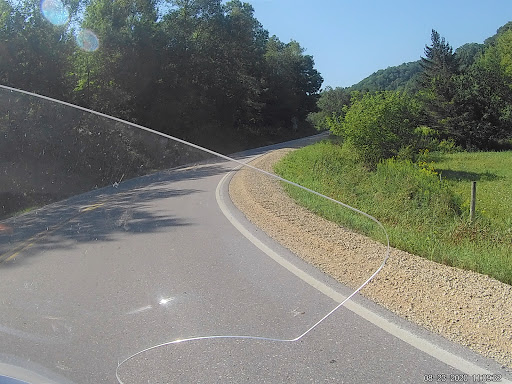 Saturday, Eric was out riding and sent a photo..."Troy...we've met before, he's the one that told us about camping in Ft. McCoy...camping this weekend up on the Flowage, has some good camping location ideas for us....".

I was as interested in the camping ideas as I was in the bike...Troy obviously a kindred spirit, putting gravel road tires on a bike they didn't belong on, just like my TranZalp. 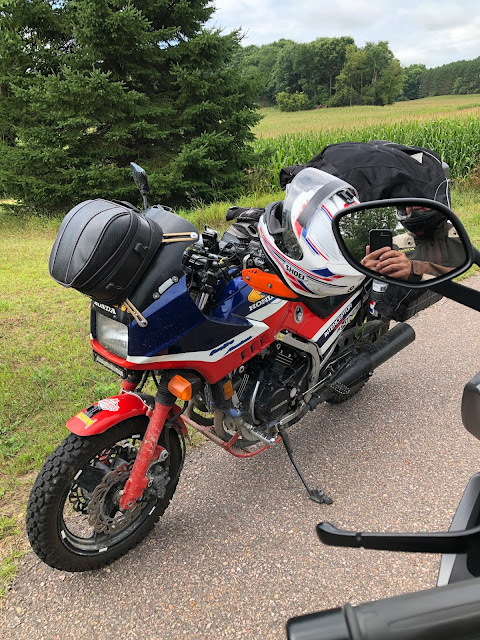 So I was just getting up to the actual Mindoro Cut where I'd planned to stop and take a photo....

This is where Troy's saying to himself..."Who's this nimrod on a scooter??" 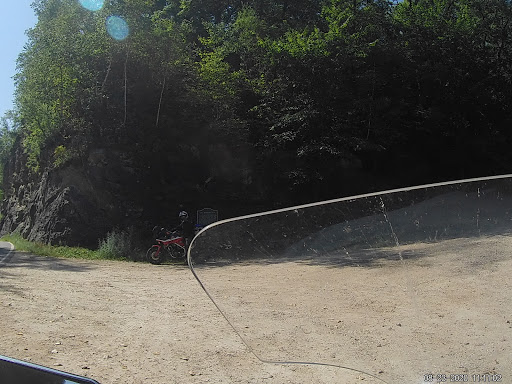 I had to pull in front of him to prevent his exit, introduced myself and heard, "....Eric told me about your blog, I just saw it...". 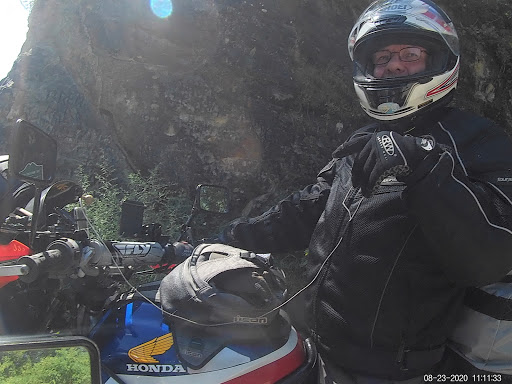 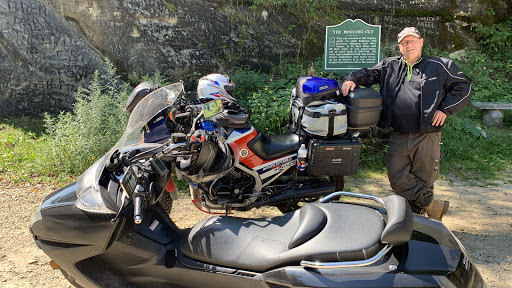 We found some things to talk about....quite a few things actually :) 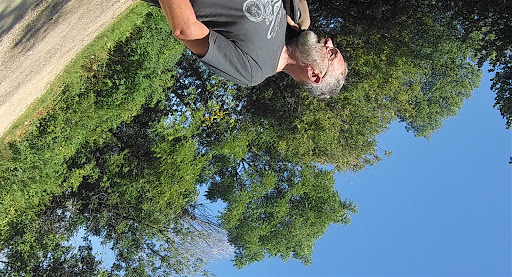 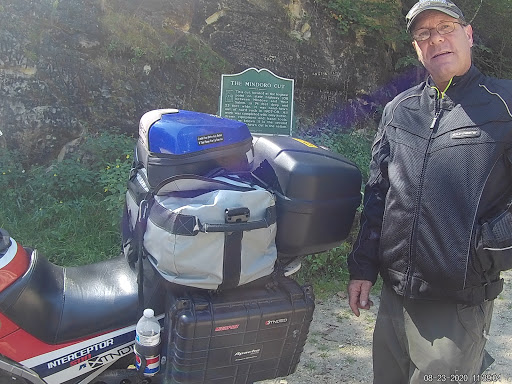 It was great to meet you Troy!  I like your business plan, sounds intriguing.  Keep in touch.

I met these two women bicyclists coming down the north side and just before I met Troy at the 'Cut, they'd stopped and chatted with him.  Now I was following them back down the south side.

Briskly and more smoothly than some motorcyclists I know! 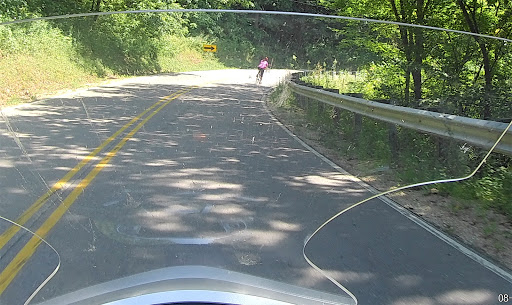 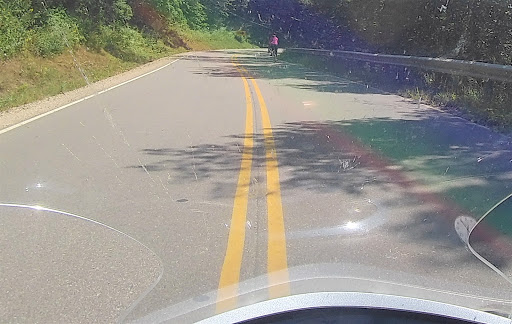 Just as tasty as I'd remembered it! 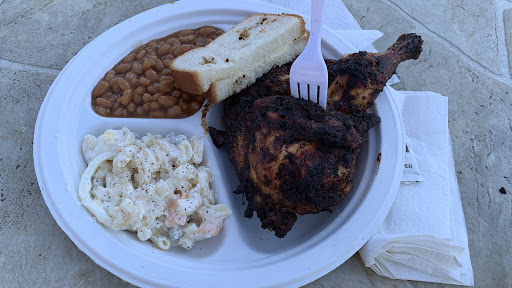 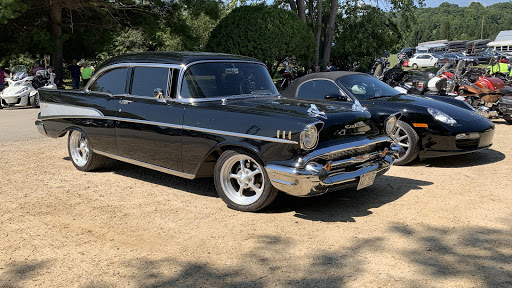 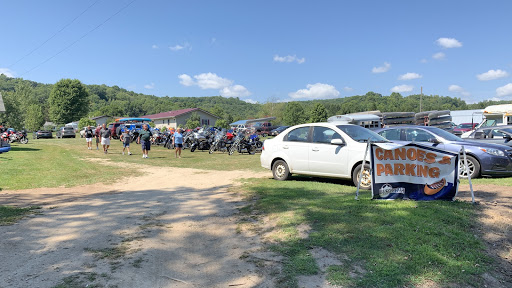 We needed dessert, so over the hill we went.  The Goose sold Eric something minty, I went with Black Cherry. 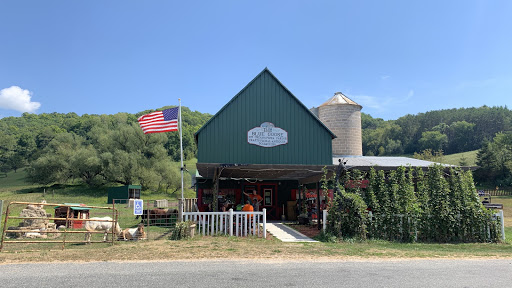 Taking the very long way back towards West Salem where we split, we enjoyed the ride through the Amish areas around Cashton and Westby, met numerous young couples going home after Services.  Lots of rough roads that were a bit tough on my license bracketure.  ROK strap to the rescue! 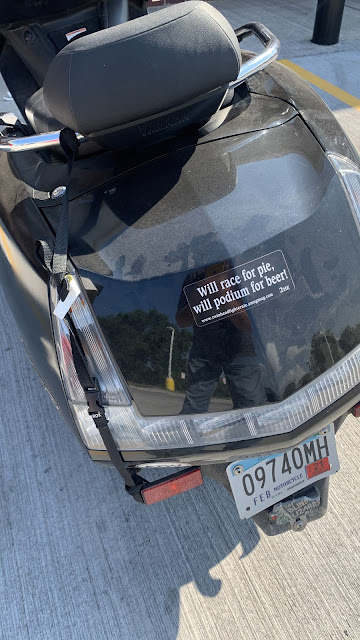 It was a good one, other than a broken license plate mount.  303 miles for the day and warm, I lost track of how many liters of water I had on the trip home.  It was good to get out of the sun. 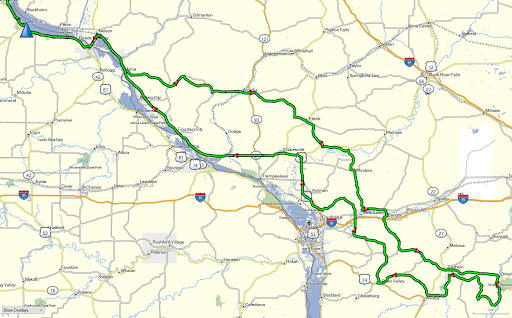 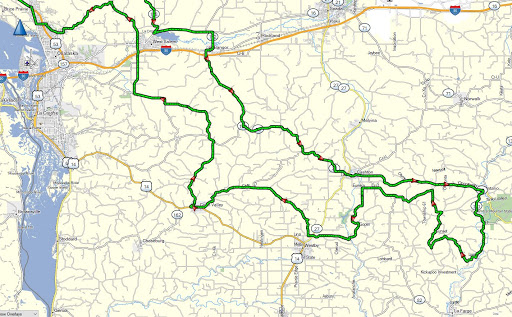