It wasn't much but it was mine,  MY start of the season. 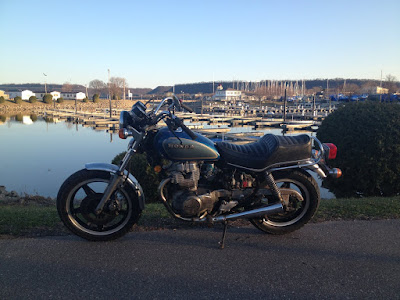 Eric's almost ready for his first oil change but at least I've had one completely warmed up. Made a stop after work at mom's and intended to make 2 more stops on my way home from there but with the bright Daylight time sunny late afternoon and temperate weather, I decided to forego my errands and get the bike out instead.

The first real time I've spent on the ol' '81 Honda 400A and it was a joy.  One more variation on a theme, that theme being a two-wheeled motorized machine.  I'll be anxious to Rally this one somewhere, someplace this summer but for now, I think I'm going to leave it up at mom's while we attempt to clean and declutter.  Saturday mornings at Diamond's will be easier and as my brother commented, "it might be necessary to take a break...blow off some steam" sometimes.

Other than my Tran Zalp, I've not named any of the bikes but I'm tempted to call this one Sparkle. 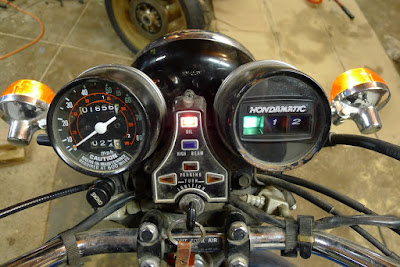 I've fallen off my almost regular mostly every weekend Posting schedule and even more importantly, I'm far behind keeping up with my Blog friends and their Posts.  For that I'm sorry and will do what I can to get caught up.....sometime.

It's been very busy around here.

Mom fell a few weeks ago and as a result, all sorts of things have changed.  A broken patella led to a thankfully short hospital stay, a knee immobilizer, a walker and now Adult Supervision (my brother and I).  Upcoming is the hurried move to Assisted Living, a house sale and lots of other "ands" that will make for a busy spring, summer and then even more of those "ands".

I'm committed to a couple of side projects, their timing not exactly optimum but then I guess it sometimes goes that way.

We've had an unbelievable early March with some record high temperatures.  Our snow long gone, a flooded driveway for '16 appears to be only in our imaginations. Many of my riding brethren have been out but the nicest days so far seem to always fall on the weekends which are my scheduled times to be with mom.

I did get out this afternoon though, 1.5 miles on the old '81 Honda 400 Automatic.  Frost is coming out and our roads have the look and feel of giant sponges, sponges that as Peg says, "feel like they're reaching up to grab us." Yes, it really does.

It appears that my low budget tuneup on the old neglected Honda accomplished something, the result is that I'm going to follow that up with some new tires and a battery.  The thing runs, I've got faith that it will not only run but run better with a bit more fussing and hopefully will be reliable enough to take me the places I need (want) to go.  It won't be pretty but I'm hoping that it will be handy.

Speaking of reliable, check this out......it wasn't just the 165; these guys were apparently made of steel.

From the Harley Davidson Enthusiast magazine, something dad began to receive once he became an HD owner and then continued to receive for umpteen years post 'cycle ownership, for so long that when he once again became an owner of a Milwaukee machine in the '80's, he didn't need to signup again.....he was already subscribed.  This magazine just happens to be one month older than I am. 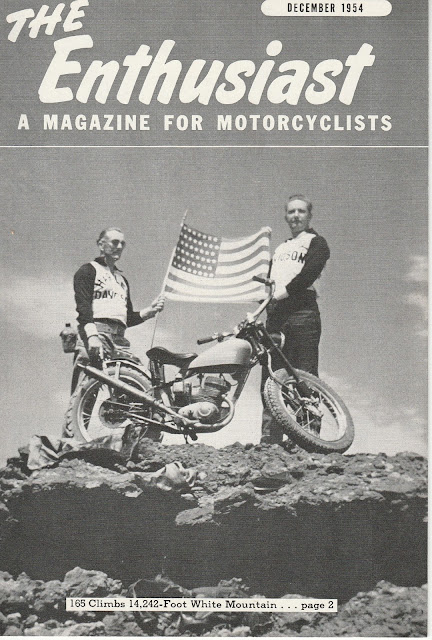 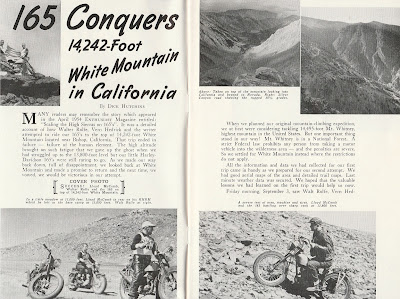 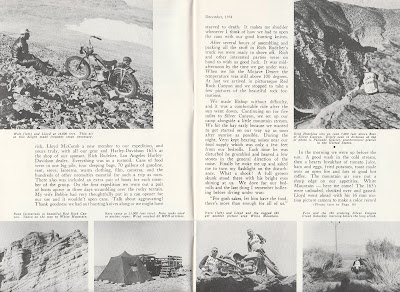 I'm very hopeful, just about confident even that my next motorcycle Post will be a more modern, up to date publish with accompanying photos in colour :)
Posted by Coop a.k.a. Coopdway at 8:13 PM 6 comments: