Actually just over half of the mileage today that I did yesterday and on two bikes at that.

The morning started with the bright yellow '04 Helix being rolled out of the garage.  Sometimes a stubborn starter after sitting for so long, it actually started rather well this morning.  Bright blue skies, a yellow Helix burbling away, it wasn't going to get much better.  I got 12 miles from home and decided to turn around and come back.  Something that sounded and felt like a bad bearing, somewhere in the transmission system seemed to be getting worse.  When under load, it was quite noisy, coasting it got much quieter and that wasn't going to be good long term, so I exchanged it for the Himalayan.

Just under 200 miles for the day, 25 of them on a noisy Helix.  One more thing to work on in December. 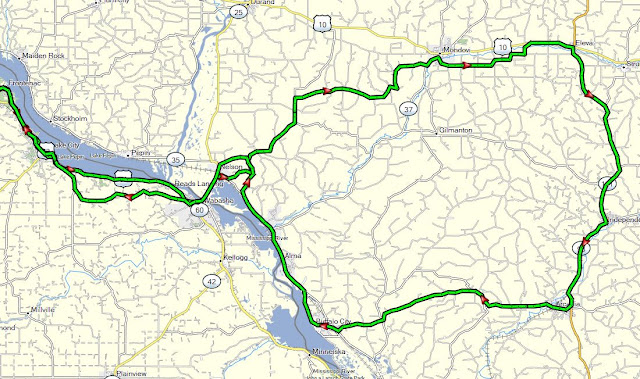 When I went for my 2nd cup this morning, I noticed this in our backyard.  This doe apparently doesn't understand Fence Rules. 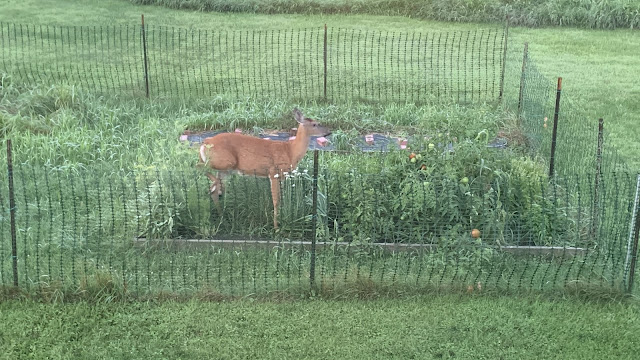 But then I got into Wisconsin... 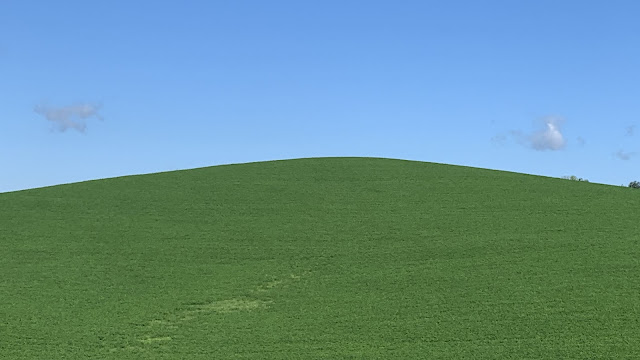 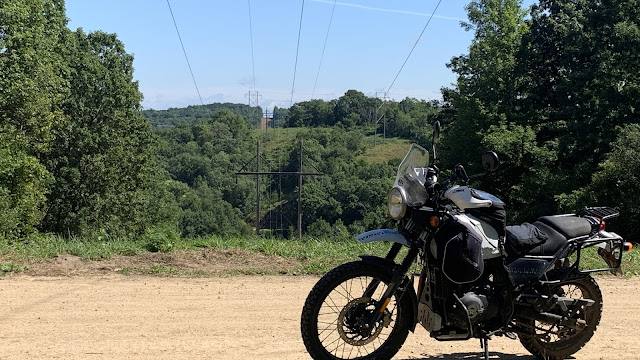 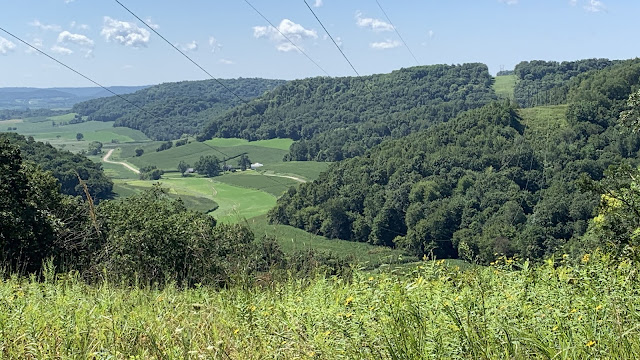 The tent caterpillars seem to be clustered in certain areas....this was one.  This Shagbark Hickory tree was paying a price. 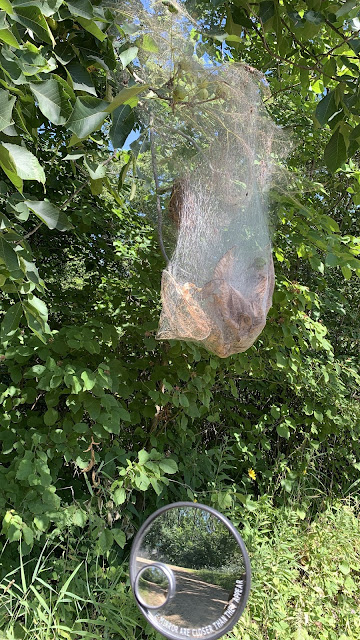 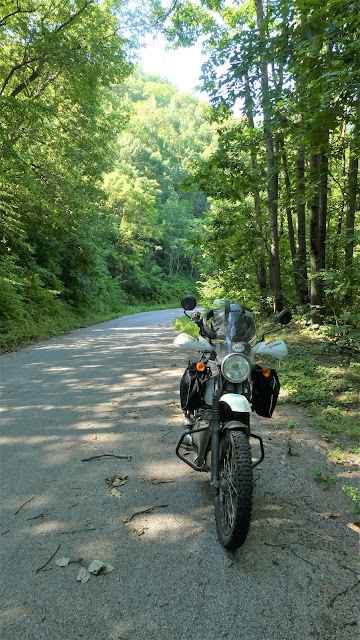 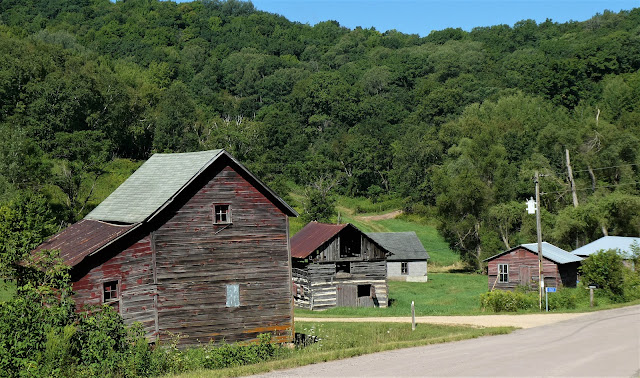 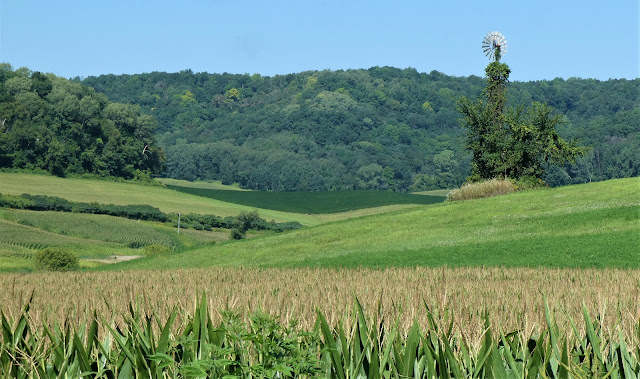 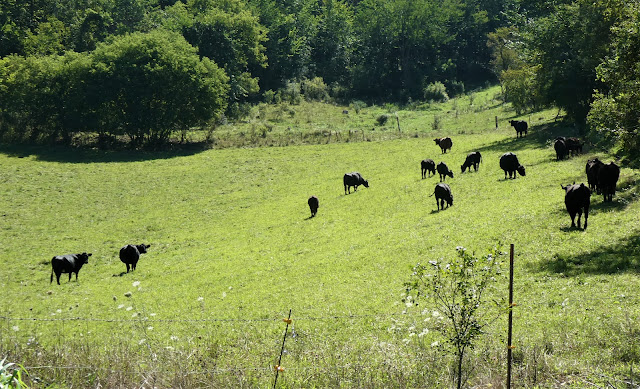 I've ridden past this for 15 years and never stopped until today.  They just were never done this way around here. 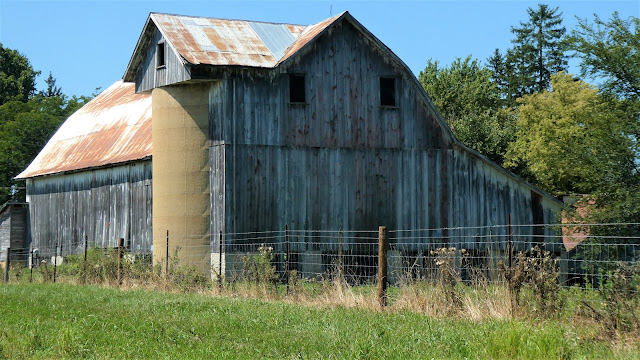 I've decided to name these Wisconsin's Grand Tetons (Cty TT).  I've long considered this one of my favorite roads but in the many, well dozens of times I've done this road, I honestly can't remember ever running it west to east.

I saw so many new things today!! 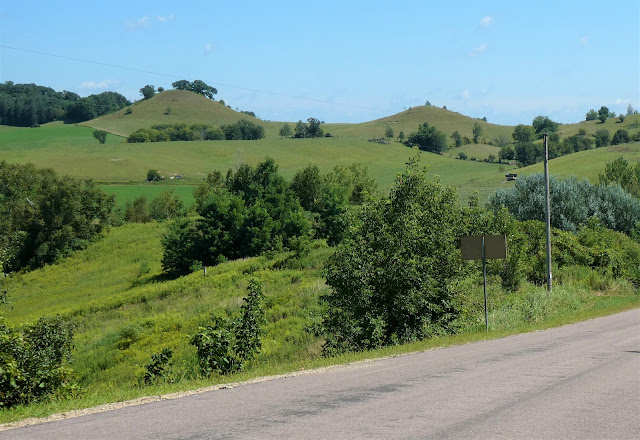 We called them water runs, places that don't get tilled and remain with plenty of cover vegetation to control erosion. 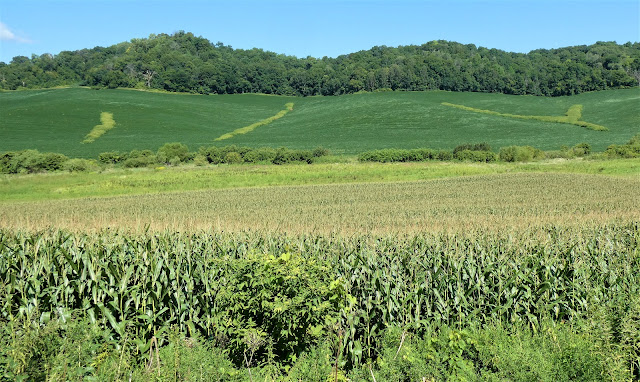 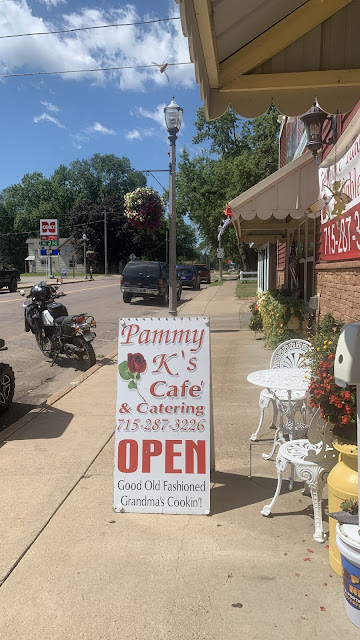 She must be a regular; Eric has seen her at the same table.  I noticed that all of us patrons were giving her plenty of Social Distance. 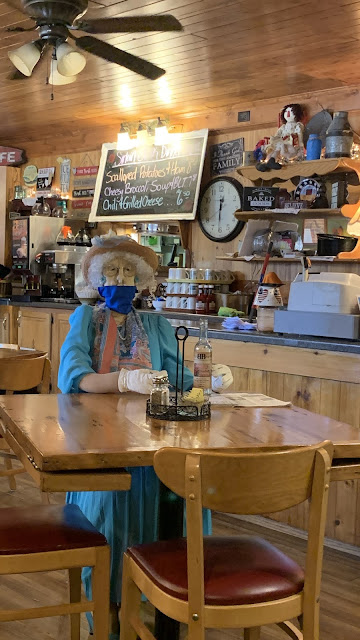 I went with the Chili and Grilled Cheese Special. 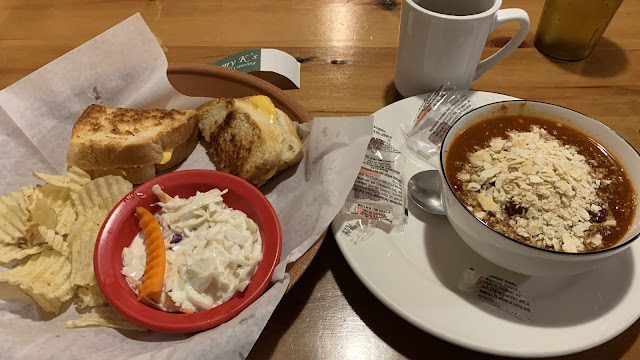 I went with the Strawberry Cheesecake and it was Special. 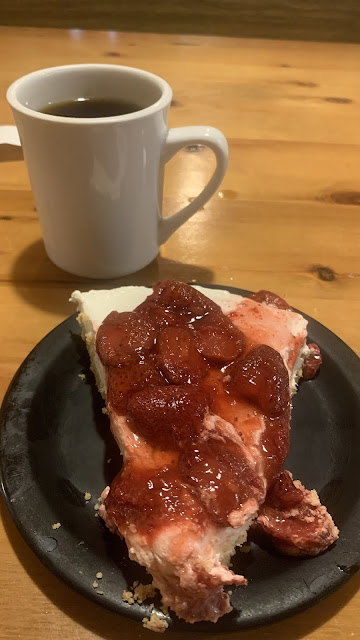 A nice way to top off my 2 week vacation, the vacation that was supposed to take place in the Maritime Provinces of Nova Scotia and Prince Edward Island (I had to promise not to take the rented Versys to NF).  With plans and reservations made in early March, I thought I was all set for a spectacular couple of weeks in August, exploring the sea shore.  As it turned out, I had a very fine couple of weeks in August in our own beloved Midwest.  There was no Atlantic Ocean, no salt air and no Bay of Fundy tide changes.  No red soil, potato farms or lobster traps.  I've seen those things and thought it would be great to see them again.  Instead, I saw and felt Lake Superior, enjoyed some very quiet time in the woods and heard my first whippoorwill.  There was no salty air, rather dairy air instead that oddly enough I miss and it takes me back.

I have no idea of the total mileage ridden these past two weeks, instead patient enough to see how things shake out with totals in this year's mileage pie at the end of the riding season.

There a number of Posts already started going back to highlight some of the longer, larger August trips.  I have a lot more to share about my initial weekend up on the Lake Superior South Shore and of course the trip West, the Almost - A - Sturgis trip.  They'll be coming soon....look for them.

It's nice to be home, but I could have used a couple more weeks.