We must have had an early Spring that year; there are many early April's around here where the ground is still very white.  I was obviously getting the "herd" out of the shed into some fresh air and as I remember it (these photos make it quite clear), was taking the time to document the machinery. 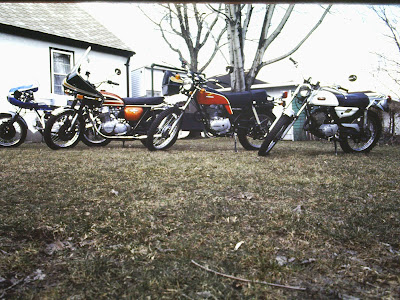 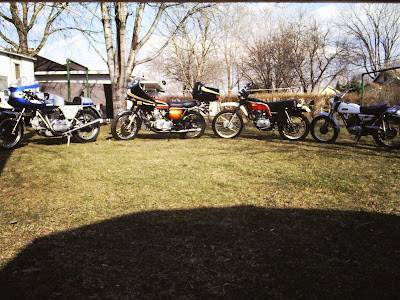 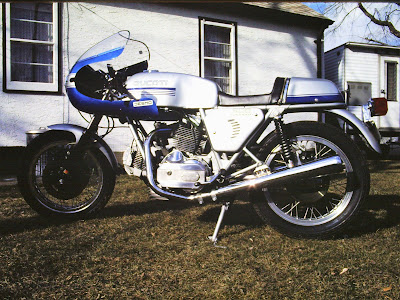 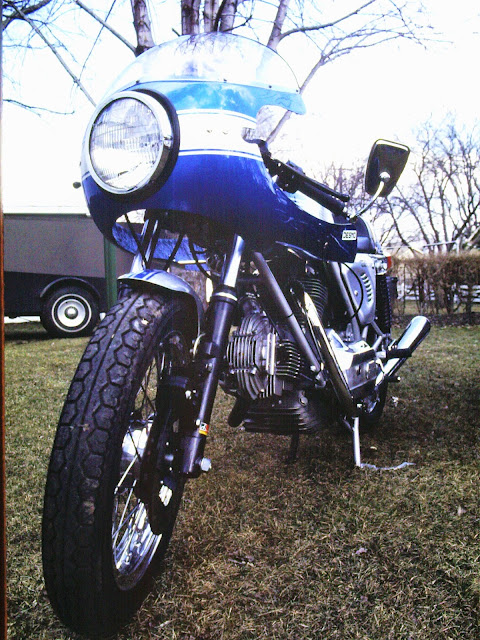 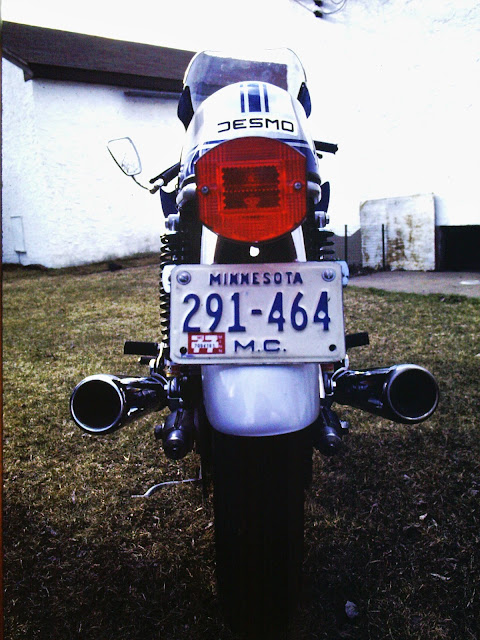 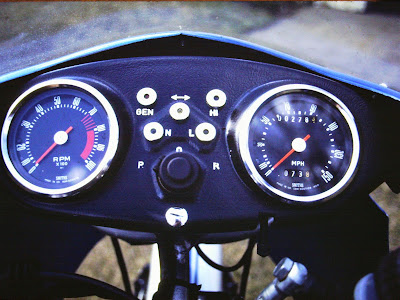 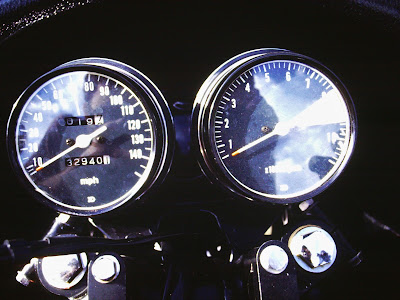 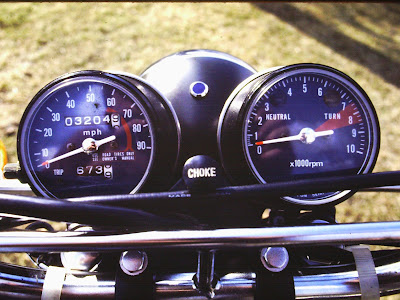 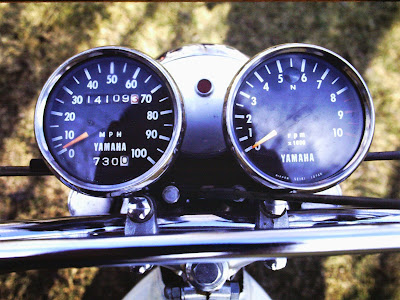 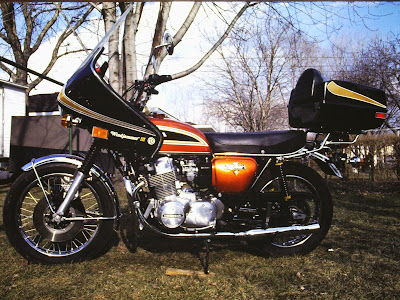 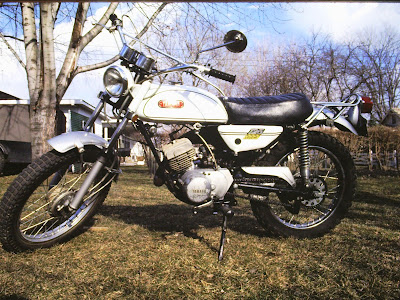 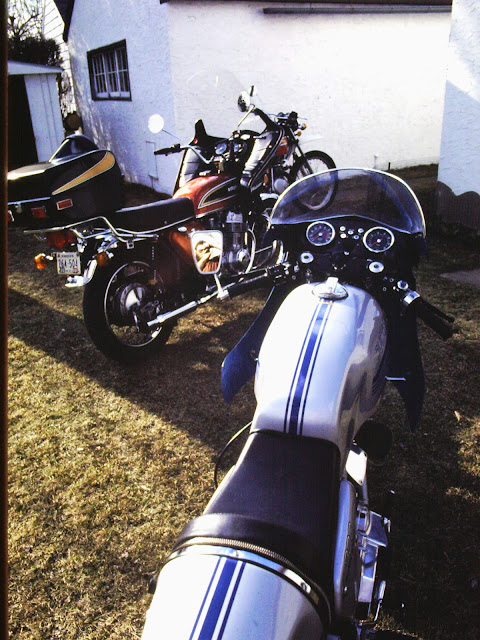 In two short weeks (April 21, 1978), the 750 Honda would be carrying me down the Big River, I'd take a left at Paducah, east to Land Between the Lakes, the Blue Ridge Parkway, Shenandoah, the Winchester Apple Blossom Festival, Bull Run and finally Washington, D.C.

That trip chronicled in my next Post.
Posted by Coop a.k.a. Coopdway at 8:33 PM 9 comments:

No advance tickets purchased yet but that's going to change as of this weekend....emails, Real Mail and a bit of PayPal should lock most everything in that's lockable.  My only reluctance for going ahead full steam this year is that I'm hoping to mix a couple of other extended (longer than my typical 3-day weekend) trips in and one or both of them just may have to trump a rally weekend.  You can bet that I'll do my best to squeeze The Full Plan in if at all possible.  It will help that the rally weekends are biased toward the beginning of the season which leaves prime travel time, later in the summer or early fall for the bigger trips.  At least that's what I've been telling myself these last few years.

We'll see how full I can pack it!


There just has to be additional long weekend in there somewhere for the Wisconsin Adventure Trail, plus a nice long week out West somewhere, hopefully making excellent use of this...... 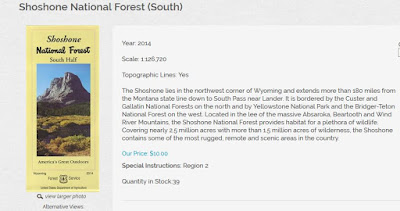 We're "enjoying" some typical January weather these days.  When I climbed in the van this morning at 5:15, the thermometer read -15 degrees F.  Out the driveway and down through the hollow before hitting the Big Highway, it dipped to -18.  Everyone will be relieved to know that by the time I made it to North Minneapolis, temps had soared to -1 and then later after the sun came out, when we were all full of coffee, the ambient went positive.

Note this lovely sunshine and how deceptively beautiful it looks there on Central Avenue.  Not sure why, probably due to the Urban Core location, but there's no snow.  Quite possibly Richard's boat-of-a-wagon and his surfboard on the top rack frightened all of the snow that was in the vicinity.

Richard's ready for the longer days....no question about it! 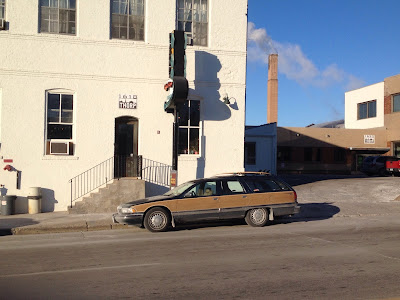 I brought something for Show and Tell today; I won't call it funny but I can call it interesting and no, this was not from last week's newspaper.

So I brought the newspaper clipping (found in dad's March 1951 Harley-Davidson Enthusiast Magazine) as my contribution.  Mike R. brought in this fantastic photo and we were told that it had been found in a 1913 camera catalog. 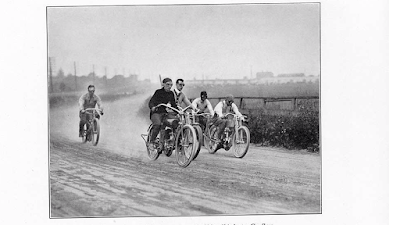 As you can tell, we accomplish a great deal with coffee mugs in hand.

Been a very busy time getting all of our extra merchandise peddled on the Auction Site....what a TON of work.  Researching, photographing, documenting, actually Listing, packaging, documenting and very finally, shipping.  Mom's (and my) Packratitis is at least partially paying off.  I almost don't have time to go to work, let alone spend time out in the shop.  That will have to change and soon; days are getting longer!  Eric's got his bike almost completely kitted out and I've not even changed oil.

While getting some of dad's old Enthusiast mags ready for auctioning, I came upon this story.  There's a lot of pretty cool old info in those '50's publications, especially some of the many "Club Gossip" notes that get published from M/C clubs the world over.  Even so, as you might guess, the travel stories are my favorite and this one really caught my eye. 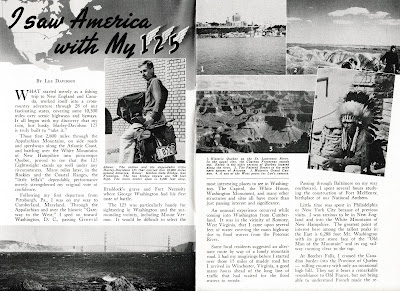 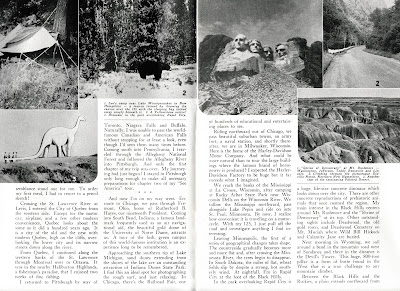 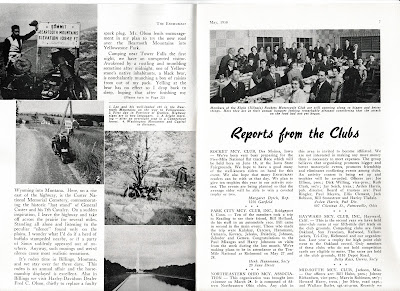 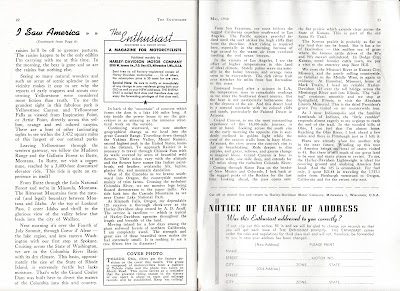 Young Lee Davidson left Pittsburgh, PA......."What started merely as a fishing trip to New England and Canada, worked itself into a cross-country adventure through 28 of our fascinating states, covering some 10,500 miles over scenic highwaays and byways.  It all began with my discovery that my trim, but husky Harley Davidson 125 is truly built to "take it."

"Little time was spent in Philadelphia or New York City because of previous visits....."

"....It was in the Haliburton Highlands, a fisherman's paradise, that I enjoyed two weeks of fine fishing."

This part especially endearing......"pass alongside Lake Pepin and ride on into St. Paul, Minnesota.  By now, I realize how convenient it is traveling on a motorcycle.  With my 125, I just pull off the road and investigate anything I find interesting."

"....Also in Billings we visit HD Dealer Fred C. Olson, chiefly to replace a faulty spark plug.  Mr. Olson lends encouragement in my plan to try the new road over the Beartooth Mountains into Yellowstone Park."

"....a black bear is nonchalantly munching a box of raisins from out of my pack.  Yelling at the bear has no effect so I drop back to sleep."


Just imagine what he'd have accomplished on a 200!

The coolest part of all....his license plate reads B52.

Finally, we get to the wildlife secion of this Post, today in our Crab Apple tree...
No turkeys, no deer beneath but instead, two very pretty pheasants. 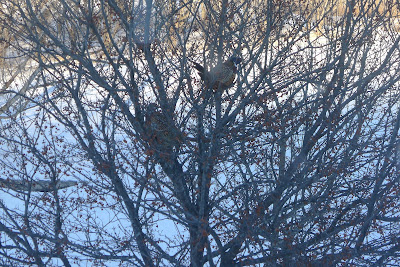 Hope your January is going well and stay warm!!
Posted by Coop a.k.a. Coopdway at 7:06 PM 8 comments: