While I'm compiling the extensive collection of photos and videos from last weeks trip, I thought I'd quickly highlight a couple of events from the trip.  Here's a view to the north and west from my Whiteface Reservoir National Forest Campground.  Hoyt Lakes is the town in the upper left, a mining town that was planned for the mine's hired help and was my closest source for gas and supplies.  Their nice array of planned neighborhood streets an example of a company town up on the Iron Range.

After the bike was off the trailer Monday morning, I wanted to check out and confirm that I'd be able to buy gas all week since choices were very limited in every other direction and the other directions are where I was hoping to spend time exploring.  The north/south road center left is Forest Road 130, also known as Mooseline Road.  The cyan areas on the map are Superior National Forest. 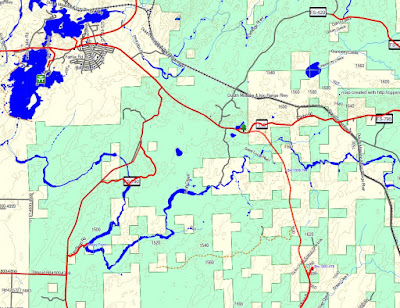 The loop left center is FR790 and as I went past the southern end, it looked a bit grown over, no tracks, tall grass, the woods encroaching on the side.  Experience (finally) teaches me to tread with care on these roads while solo adventuring.  This part of our state has little mud or sand, instead lots of gravel with potentially low, swampy areas.  Recently very dry, Sunday there was rain all day so I was justified with my caution. 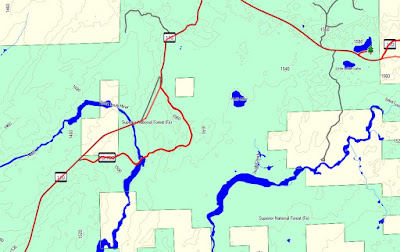 Both roads cross a small St. Louis River, the very same river that grows to flow into the Duluth/Superior area at the western edge of Lake Superior.  As I headed north and came upon the north end of the 790 loop, that end of the road looked much better.  I had time, I had enough fuel so I thought I'd go clockwise as far as I reasonably could and maybe just maybe make it out the other end. 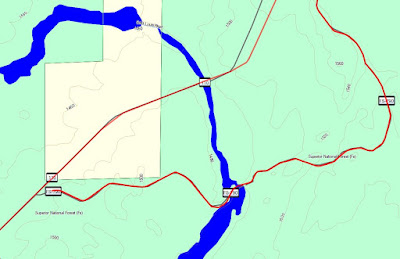 The intrepid readers among us may have already noticed the gap in the red line.  A big tree, too long and too solid to just push out of the way was across my path and based on that scale down in the lower right hand corner of the map, maybe 45-50 Moose length in from the main road.  The bright yellow-handled saw that I bought and brought along for this very purpose was conveniently back in the T&C, down in the Stow N Go well that once housed seats.  With that saw I'd have been able to cut a notch that would have allowed Himalayan passage.  I didn't take a photo, had to backtrack which wasn't a hardship at all. 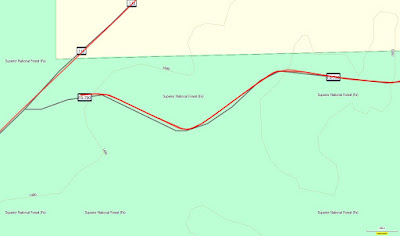 Later that same day, further north and east I came upon another tree that had been across the road.  Normally a very patient adventurer, I wasn't about to be turned away again.  I had my 12mm ROK Straps along but I was highly doubtful that they'd be up to the task.  Now if I'd have had the 25mm ROK's along, they may have worked.

Instead, I had to get the Big Ones out.....this is what's known to those of us in the trade as Strap Carnage.  Sometimes the price to pay.

As long as I was going to bother, pulled far enough to make a difference.  Next time I best bring the stronger Yellow straps. 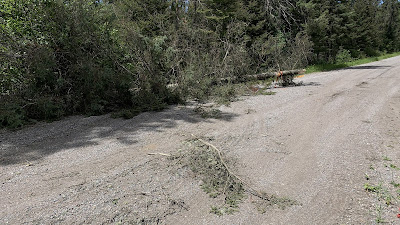 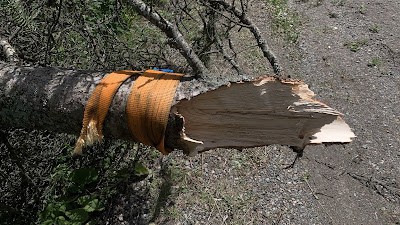 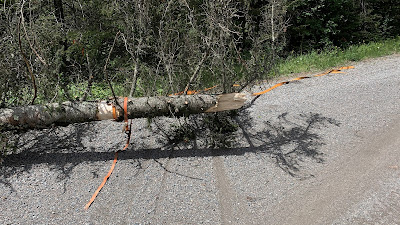 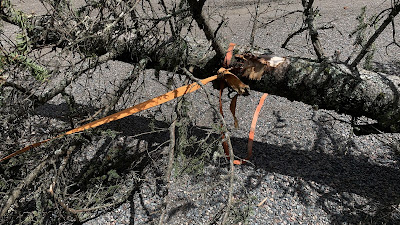 Another couple hundred street miles on that rear tire and I may have had my hands full.  Speaking of trouble, the secret to success with an endeavor such as this is to Anchor Low.  Pulling High could bring about a poppa wheelie, the potential for an entirely new set of frustrating problems.

Clear and on my way, these orange straps aren't much good to me any longer...too short. 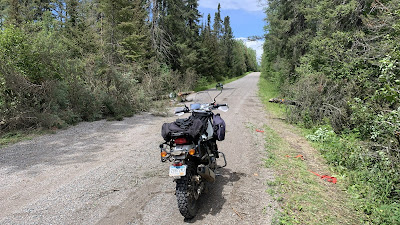