Today's plan had been to head (drive) to Minneapolis early for coffee to help Mike with some computer issues, then a quick stop at mom's to both pickup and drop off some things, hurrying home to take advantage of the predicted "mid-50's" day for a ride.  Perceptive Mike suggested that since the day was going to be so nice and that we'd have more Saturday's ahead far short of nice that I should just stay home to get an earlier start to the fine day.  After seeing wife Peg off for her week-long visit east, I finished some chores, did some shopping and rigged up a temporary Powerlet pigtail for my GPS on the BMW.  I was pretty sure I had an extra one around and I did though it's a bit short and won't be adequate for a permanent installation.

The bike started well at 46 degrees after sitting for a couple of weeks and I managed to keep it running now that I've got a bit more experience with the choke operation.  Out the driveway, watching for running deer and the orange people chasing the deer.  Our hunting season is in full swing and I saw many, many hunters on my ride today as well as a fair number of deer harvested. 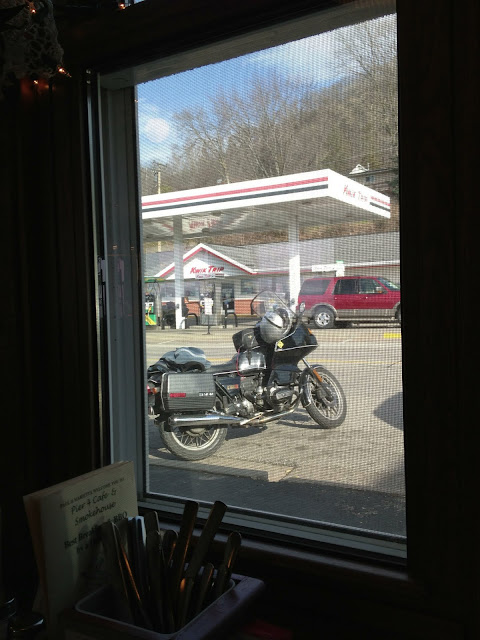 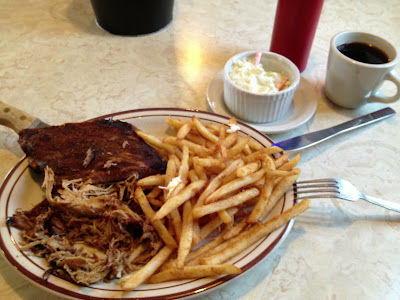 In the old days, every trip or almost every trip I made through Alma necessitated a ride up the hill to Buena Vista Park, the city of Alma's overlook above the river.  Realizing I'd not been there even once this season, today was the day.

The short walk out to the overlook.... 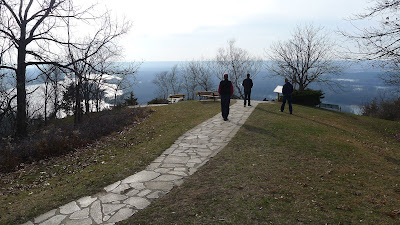 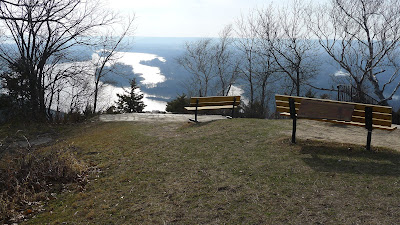 Alma, the Lock and Dam, Minnesota bluffs in the distance...... 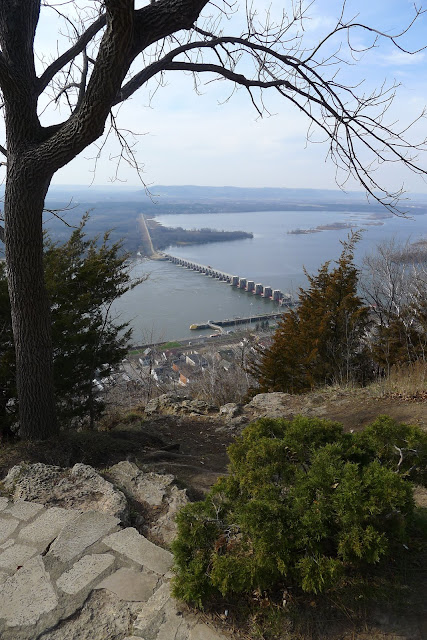 Now it was time for some riding and to start with, a trip down one of the nearby steep gravel roads.  This was one of the first places I took my Ducati when I first brought it home back in 2004 after my nearly 20 year hiatus from riding. 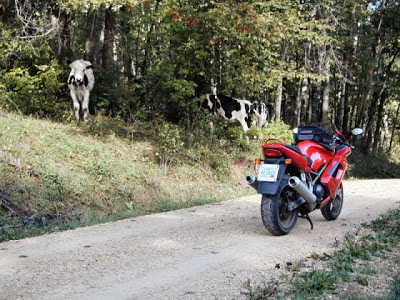 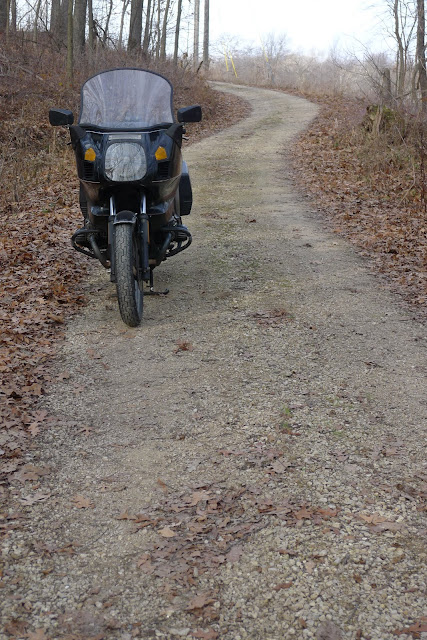 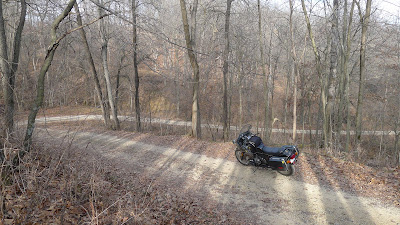 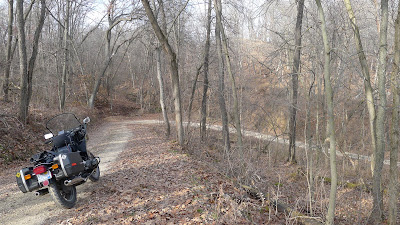 The road ahead, continuing downhill..... 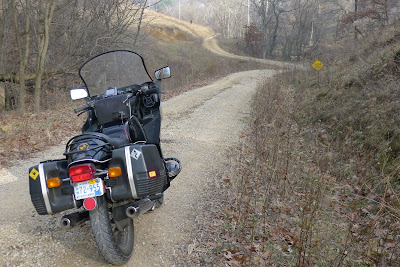 Later, here I am on Hanson Road, the first time I've gone up rather than down. 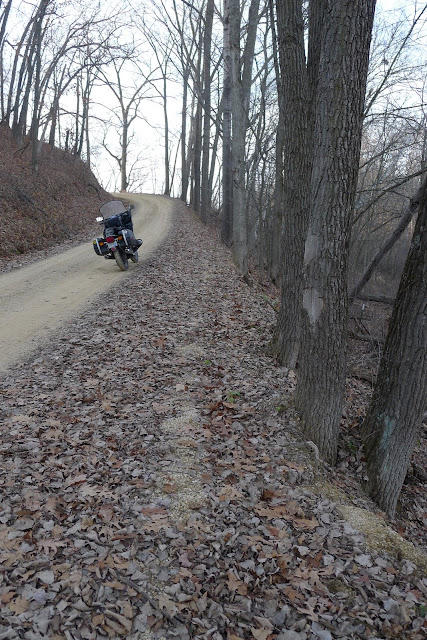 I was the only motorcyclist at the Pepin coffee shop this afternoon though not the only two-wheeled vehicle; the pedaller enjoying a cup as well.  Normally we sit outside but resting inside felt pretty good today, at least until the coffee started doing what it does. 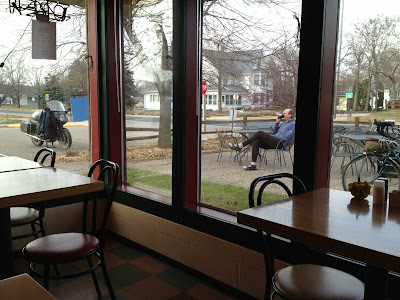 From Pepin I decided to head up the Wisconsin side of the river this time rather than down and around, making today's Lake Pepin route a counter clockwise version.

Here's one of the waysides; there are numerous overlooks and Historical Markers along the Wisconsin coast.  The river (and lake) makes a huge right angled corner here, flowing from almost straight east to straight south.  The bluff in the center of the photo is called Point-No-Point due to the fact that the riverboat captains can't seem to get 'past' it as they round the corner.  We live in the valley beyond it; close and yet so far away. 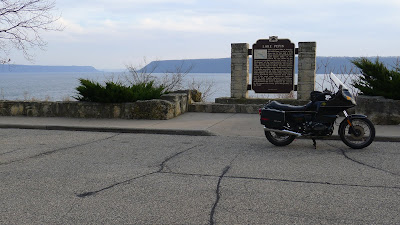 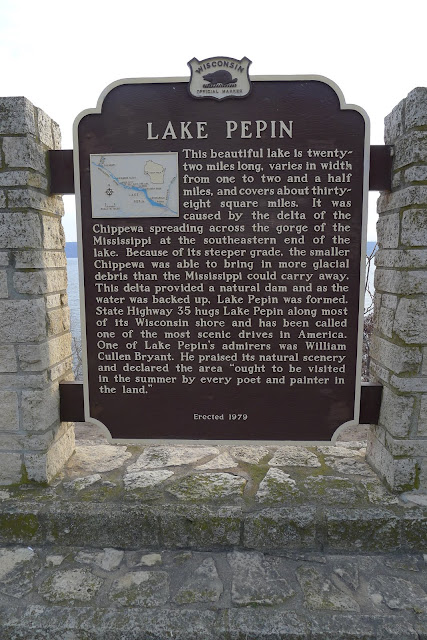 And for some perspective, another Historical Marker nearby in 1979; Lake Pepin and a tugboat w/barges on the water.  This is the 850 Suzuki I rode to the Maritimes that summer. 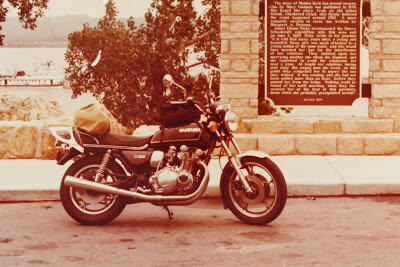 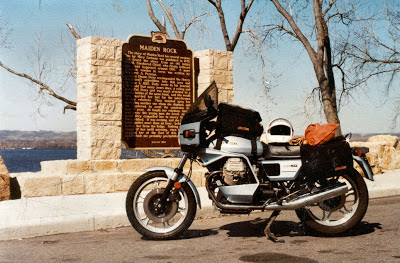 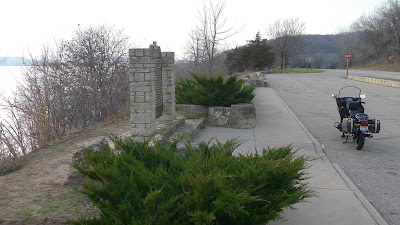 After this stop, it was up to Hager City, across the river and back in Minnesota to Red Wing, then home.  Just a bit over 120 miles today and I didn't fill the tank again this afternoon.  I hope to get out once more tomorrow and if I take this bike, I'll be able to find out what kind of mileage it gets with today's combination of highway and narrow gravel use.
Posted by Coop a.k.a. Coopdway at 9:32 PM