My Annual Game Of 'Chicken'

Today was finally the day.  The snow fence section along our most vulnerable section of driveway is up.  This low spot is very prone to the accumulation of blowing snow and the fence loosely catches the blowing flakes, slows them down and piles them up on the leeward side rather than letting them build up on the driveway.

A short number of weeks ago, there was an almost record-setting crop of corn on this ground, of course preventing a bright orange fence from being erected.  Once the crop is gone, more years than not, fall field work and the fence would be in the way for that.  Depending on whether the year's crop was corn or soybeans, a late fall application of anhydrous ammonia may get knifed in; our farmer always says that he'd just drive around my fence if it's in his way but I do my best to wait until he's finished.

So, nothing happens until the farm operations have been completed.  Today the wind was only about 5mph according to the weather man and that's about as windy as it can be to do a reasonable job of erecting what is essentially a big 100' long sail. I had hoped to put the fence up yesterday but the winds were gusting to almost 30mph.......hopeless fence building conditions.  Of course last weekend would have been ideal but I had Major Riding to do then, a simple matter of priorities.

The last hindrance to snowfence building is frozen ground.  Frost an inch or so deep is still easy to penetrate with the T Posts but if the soil is frozen any deeper, the posts not only pound hard but the welded anchor plates like to break off once the post is deep enough for the flange to start entering the ground.  One winter all of the above conditions had not been met and I decided that I'd just not put the fence up..... a very big mistake and we paid for it all winter long.  The driveway can drift shut, even on a day that doesn't snow; blowing snow from up the valley is all it takes, picking up speed as it moves across the fields, just looking for a place to anchor in.

A relief and a nice task to have complete on a 25 degree, faintly breezed day. 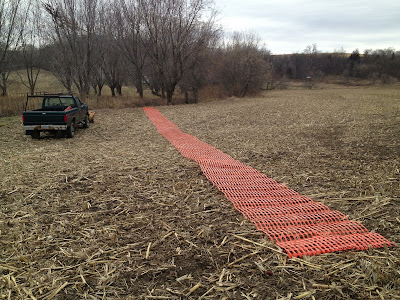 The wood lath and Industrial Strength cable ties in place. 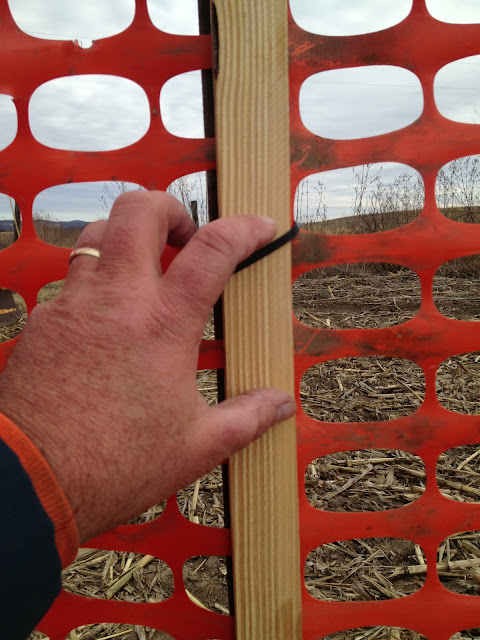 The last section to go up.  I always wait to put the last post in since there's normally'shrinkage', especially so on windy days when I don't get the full benefit of 100' of orange plastic. 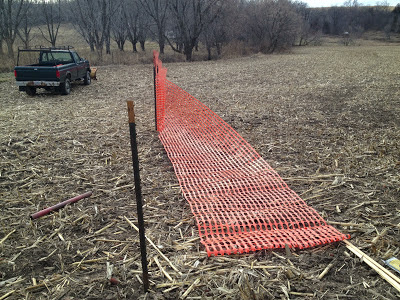 Standing on the driveway, in the low spot and looking 'up wind'. 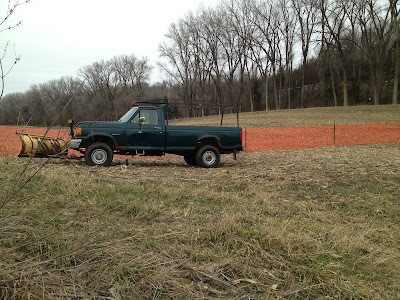 What it looks like without the fence (and every so often, even with!) after a minor snowstorm though major wind. 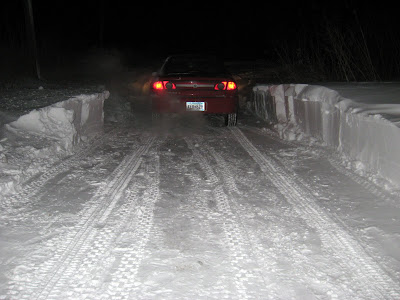 This was a few years ago, I had foolishly gone to work without my boots and there was no way I'd have been able to bust through the drift in the car.  You can see there isn't that much snow on most of the driveway, only deep where 100 acres of open, windswept land has dumped it.

A future Marine and a Corgi (Milford) rescuing me, bringing boots so that I can walk in and come back with both better equipment and proper dress.