Last Ride Of The Season?

We're running on borrowed time now.  Dave and I got out for a really nice Sunday ride and this might have very well been it for a ride with any distance.  I'll often take out the TW200 for some very local backroad riding but the rides are short, both in time and in distance.  Once the first snowfall arrives and the roads get salted, my riding is over on the paved roads.

Anxious for one more ride on the new-to-me RT100, Dave and I agreed to meet back in Alma for lunch.  We both left home a bit earlier than necessary and wound up meeting at the gas station on our side of the river by chance. 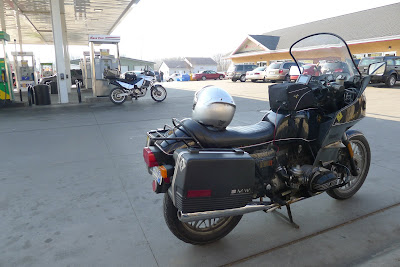 Justin, peaking out of his carrier, on the back of the Elefant. 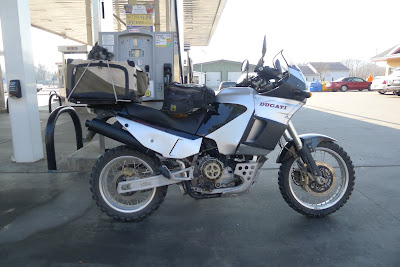 Dave had pup Justin along and wanted to stop prior to lunch at Reich's Park to let the dog get some exercise before we ate. 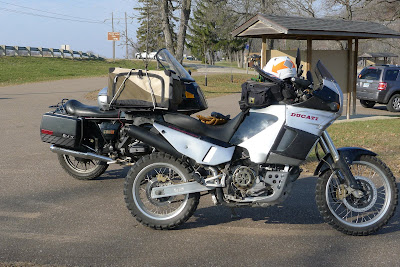 Reich's Park is where over the last decade the migrating swans have often stopped in the Buffalo River/Mississippi backwaters to rest on their flight to Chesapeake Bay.  Through the years it has been a gathering place for tourists to see what once was thousands of big white birds landing and taking off from their momentary resting place.  The migration was later this year than what seems to be normal and in recent years, the number of birds stopping for our viewing pleasure has gone way down.  We did manage to see a few of them though in among the Canadian Geese.  The white birds in the center of the photo are Tundra Swans. 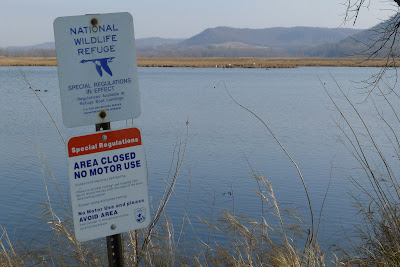 After this stop, we mostly rode, finding many quiet gravel roads mixed in with those paved, hunters and their recently fallen prey were everywhere.  We made one more stop to let Justin run and roam a bit before heading back towards MN.  Gas mileage for the RT yesterday was a fraction over 49mpg and I most likely made almost that kind of gas mileage again today.  I put on about 20 miles more than yesterday for just under 145.
Posted by Coop a.k.a. Coopdway at 5:11 PM