Sometime in early summer '77, I loaded up the 750 Four for a northern MN camping weekend.  Without a real destination, Brainerd, MN was behind me as I headed still further north.  Seeing the Brainerd International Raceway on my right, I was curious after seeing the sign notifying passing traffic that the Central Roadracing Association was on the grounds for the weekend.  Brother and I had followed enduros, motocross and other off-road style racing, but roadracing had been the last thing on my mind.  Other than breezing mostly over the race coverage in the magazines, very little attention had ever been paid to racing on pavement in our small world.

Stopped at the entrance, Julie and Laura made outstanding ambassadors, flaunting my interest in a camping weekend by emphasizing "FREE CAMPING if you work a corner".  It and they were just too tempting, so I registered, signed the waiver and pulled into the pit/camping area.  Surprising myself to no end, it was an amazing weekend for me; I was hooked.  Everyone was friendly, I quickly got to know faces, names and machines, then was disappointed when Sunday afternoon came when most of us were heading back to the Twin Cities.

Intoxicated with the Ducati twins, I had no patience and by the end of July, I was the owner of a '77 Desmo 900SS.  Leo's in Bloomington (original location) had one on the floor, but not for long.  Continuing to work corners every race weekend in '77, friend Chuck (racing his on track weekends) and I put quite a few street miles on our two blue/silver twins that summer. 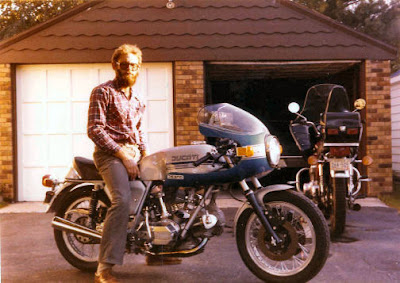 A friend and former rider/owner along for a ride, we using both of my bikes for a summer evening ride. 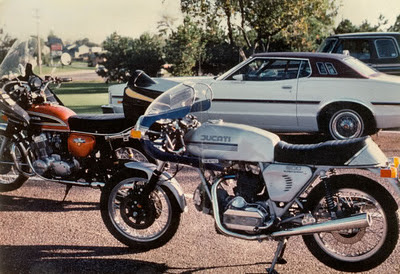 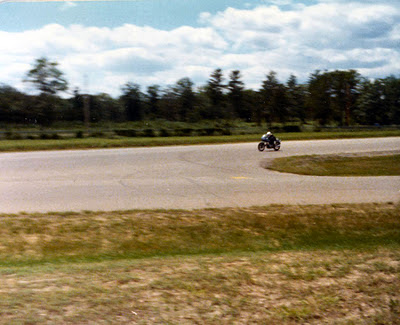 A few years later......after I'd sold the bike to Jack.  This was taken at Hamel's when First Thursday's still happened in St. Paul. 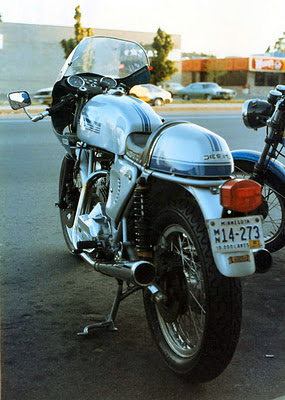