Day 3 on the Prairie

Tuesday morning turned out to be another beautiful morning and warmer, so I started riding earlier than I had the previous two days.  This was to be my southwest loop and only the first few miles were on roads I'd been on earlier in the week.

All that's left of Hill Springs School, dates on the marker read 1887-1959.  Just before I turned this corner heading west, I noticed a loaded dump truck approaching me from the north, raising huge clouds of dust.  To stay  out of his way and avoid some dust, I took this left, attempting to not be in his way.  He must have been coming at over 40 on the gravel road, then seeing me, he braked hard to a stop, then backed up even with where I was standing at the marker.  To save him some steps, I guiltily headed over to the back of the truck to meet him and assumed he was stopping to see if all was OK.  I was right; he was young, early 20's and wanted to make sure that I was alright.  I thanked him profusely, surprised that he'd stopped. I would bet his truck was overloaded, it must have taken him a quarter mile to get back up to speed again. 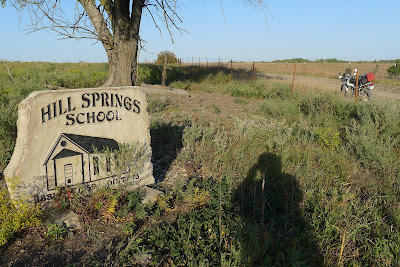 Unlike all of the silos in our part of the country, the majority of every one I saw (most of them now only monuments, not being used) had no dome or cover on top, only railings. 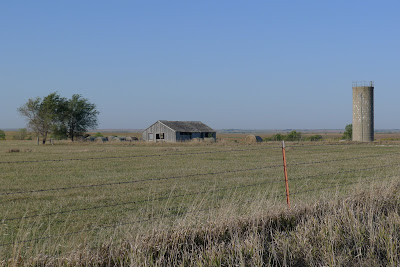 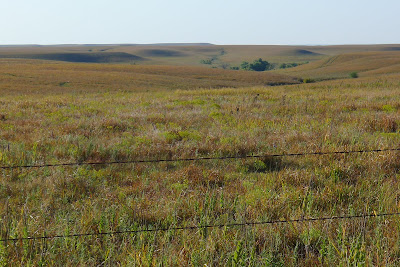 Access road to a quarry, note the huge blocks left behind ..... 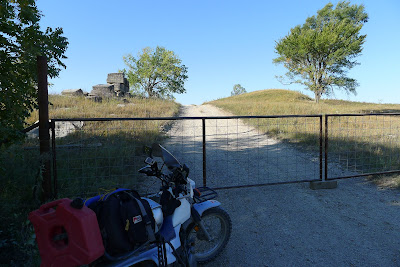 I saw a few of these hay shelters, 'barns' like I'd never seen before.  The roof can be raised and lowered, adapting to the volume of hay underneath.  Large corner poles are in place, the roof slides up and down on the pipes via winch. 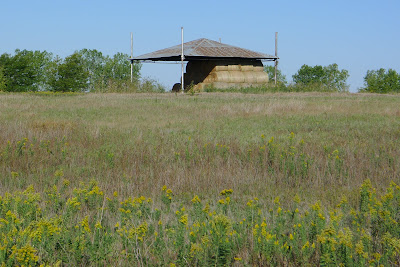 Stopping for a break far away from anything I could see, these cows were able to see me.  As I drank some water and snacked, the cows, too curious to stay away, all followed their 'leader' to within just 50 yards.  Suddenly they must have decided I wasn't the guy bringing feed, stopped, then turned away, heading back to where they came from before I interrupted them. 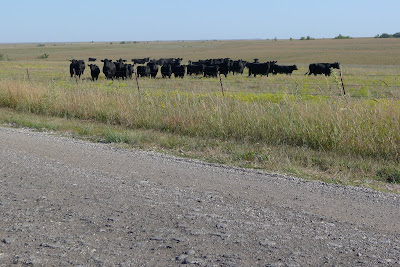 My road between Clements and Cedar Point. 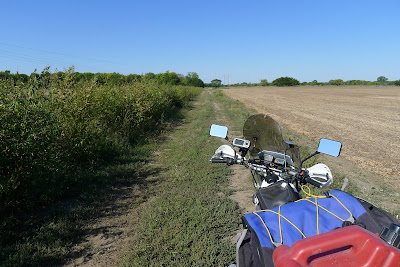 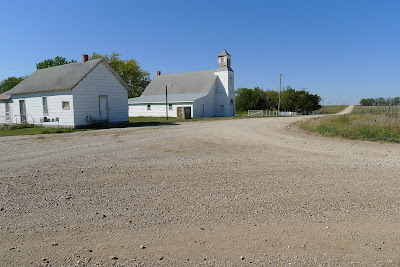 South/East end of Coyne Creek Road.  A Minimum Maintenance road that the Backroads Kansas Riders frequent.  I've seen many photos of their rides through this valley where they have a substantial water crossing.  After a drought-ish summer and fall, my early October ride on this road was only dusty. 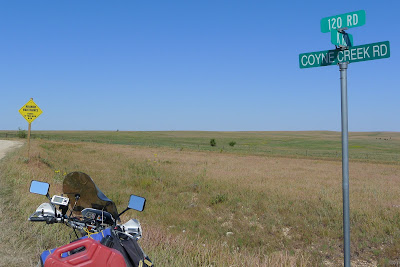 As the road heads down into the valley and off to the right, it runs through some dense woodland and crosses the often wet streambed. 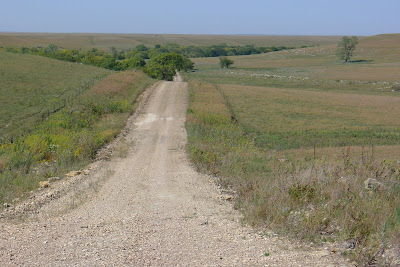 I'm stopped right where there is often a running stream though on that Tuesday not a single drop. 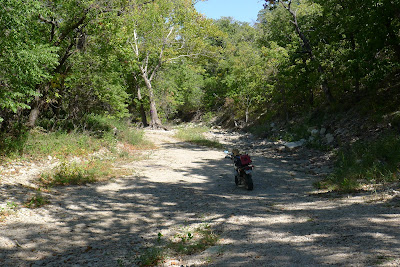 From there, I headed east into Cottonwood Falls and took Hwy 177 north up to Council Grove and the campground.  Wanting to get online and upload some photos, I went into Council Grove to use the library before they closed.  After some dinner, I went out for another ride, heading northwest from the Rec. Area through Kelso and on to Parkerville, both places that were on the early part of the planned 4th loop that wasn't going to happen this trip.

Another fine evening around the campfire, talking with a couple from Philadelphia and getting the TW200 onto the trailer for tomorrow's (Wednesday) trip east to Potosi, Missouri for the Falling Leaf Rally.