Reminiscing over my best ride ever started in Part 1, posted back in early '13.  Only now looking back at that post's Comments remind of the poignant words from our friend Bob who is now traveling these days via ScooterBob.

While looking through a bunch of old documents here at home for something very particular (which so far still eludes) an old torn, overly-stuffed envelope appeared with some goodies from my 1979  trip.  I know that somewhere, still hidden, is the Journal that I kept that summer of each day's observances.  With the archived photo images from those days and the tidbits of paper that were kept, my old trip almost comes back to life even without the many benefits of my original words.

Before we leave Michigan and the US of A to cross into Canada, some very good times were had at this place in Sault Ste. Marie......this quite clean place mat still exists, something I'm seldom able to pull off. 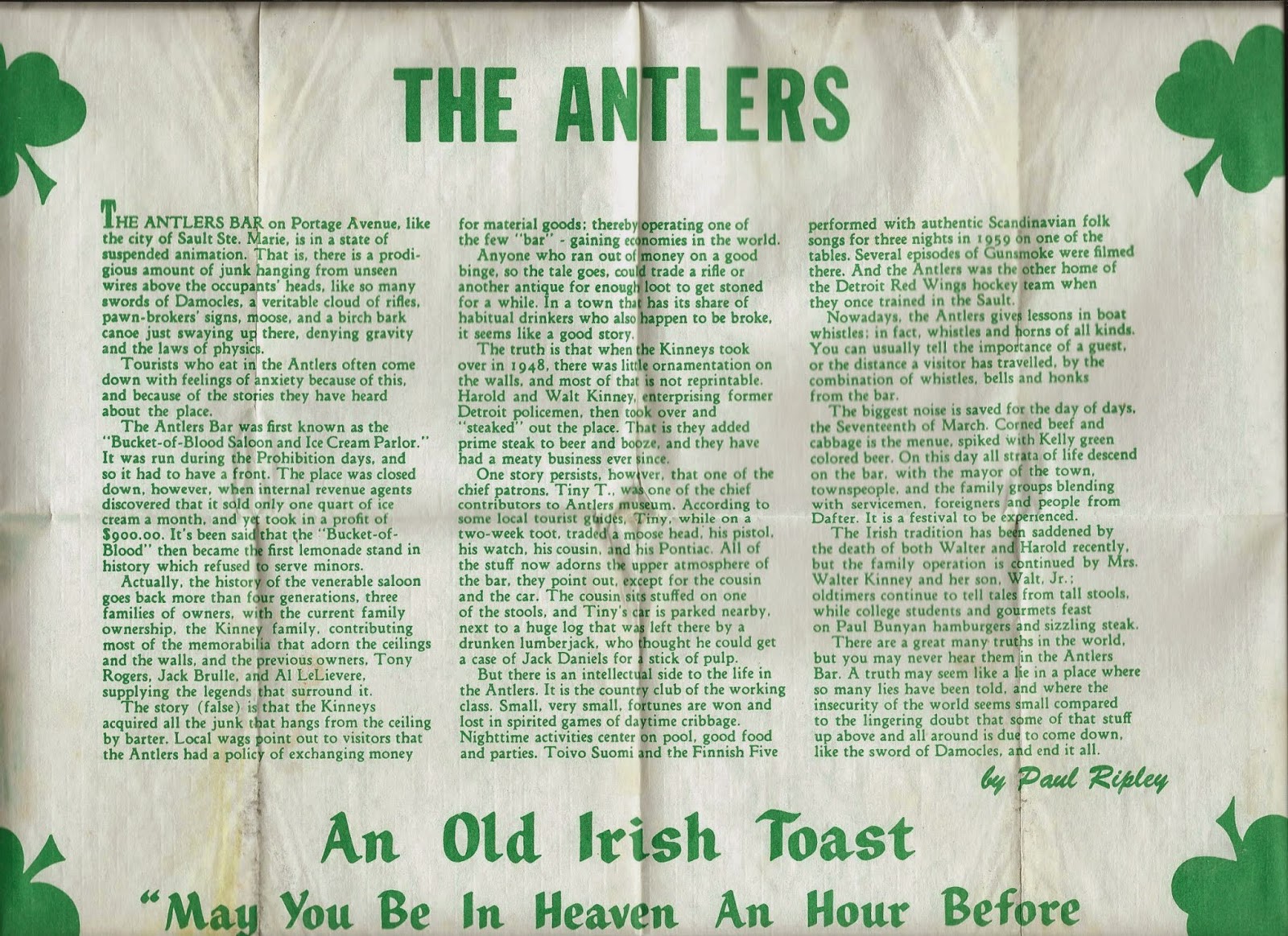 I left the Soo and the US with all sorts of new knowledge, sense of direction and attitudes that were discussed in the previous trip report.  One of those and probably the most important, was my new appreciation of available time.  That morning's ride across the bridge and through Canadian Customs was a dreary wet one and even with the entire expanse of eastern Canada ahead of me, I managed the discipline to jump off of King's Highway 17 and loop completely around St. Joseph Island.  That might not sound like a big deal from where you're sitting but believe you me, it was.

Back onto #17, I remember riding east through Sudbury, quite sure that I stopped at Samuel de Champlain Provincial Park and from the looks of things, spent two nights there. 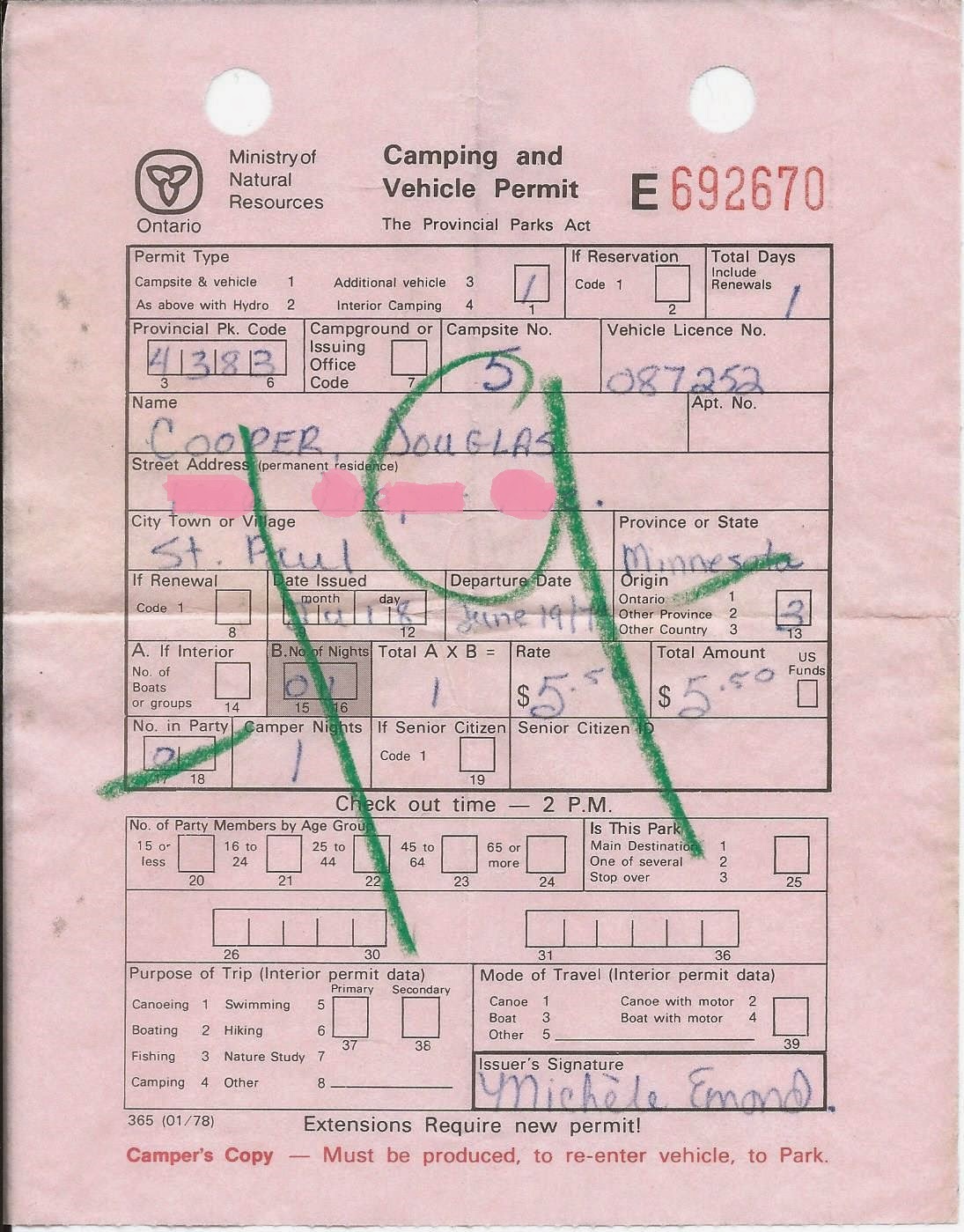 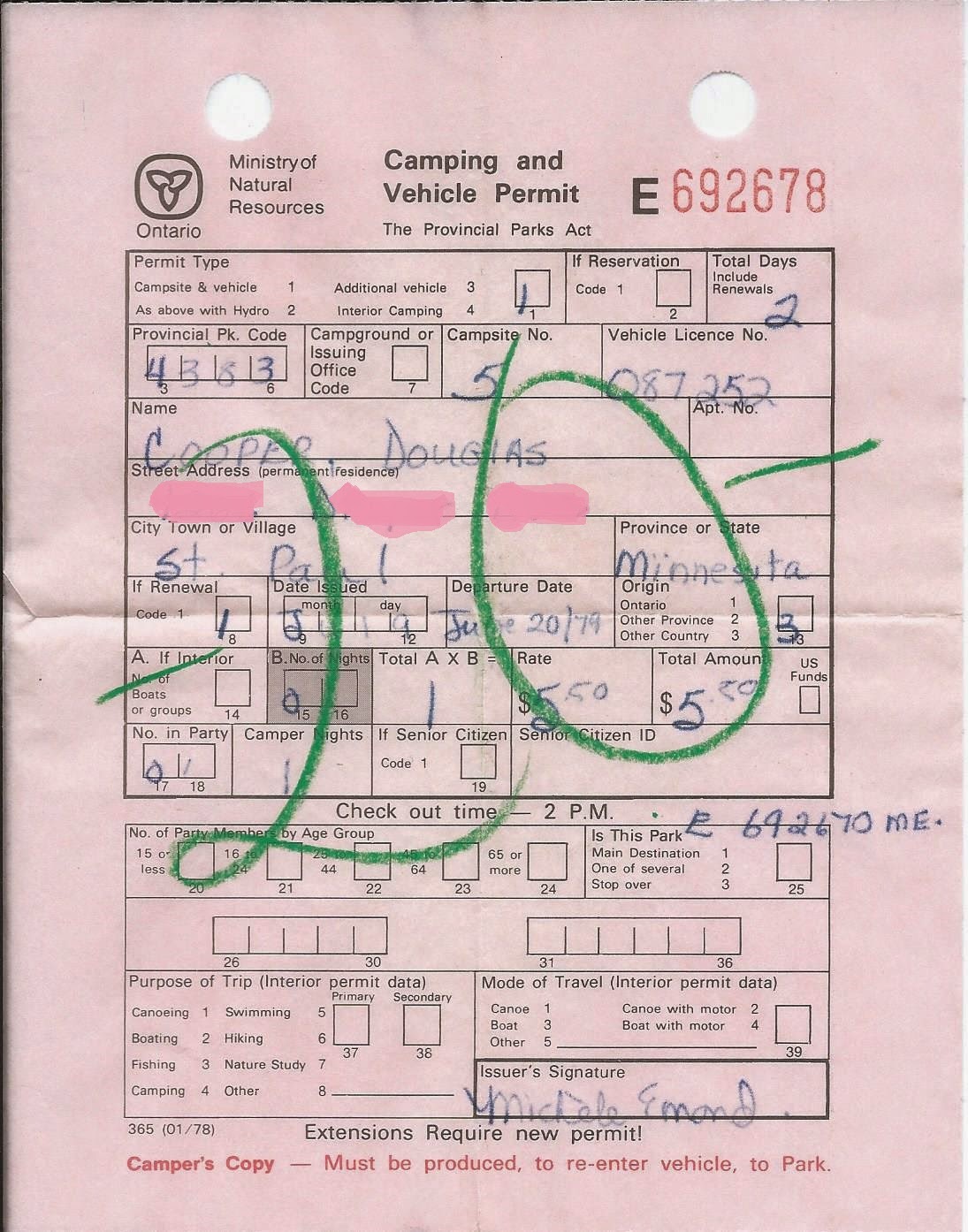 I don't remember taking many photographs and that's correct; I did not take many photographs.  As mentioned before, I was poor.  Ektachrome was expensive and processing Ektachrome even more so.  If I was making that trip today, you'd have to endure a bazillion images.  I might not even be home yet from all of the stopping.....

Since I knew and was very familiar with the west end of our Great Lakes, taking at the very least a quick look at the eastern end and seeing where they entered their final flow to the Atlantic was a given.  I'd not ever seen Lake Ontario before so that was part of it as well.  Hwy 41 is familiar, Prince Edward was a stop, then Perth and back up to Fitzroy Provincial Park. 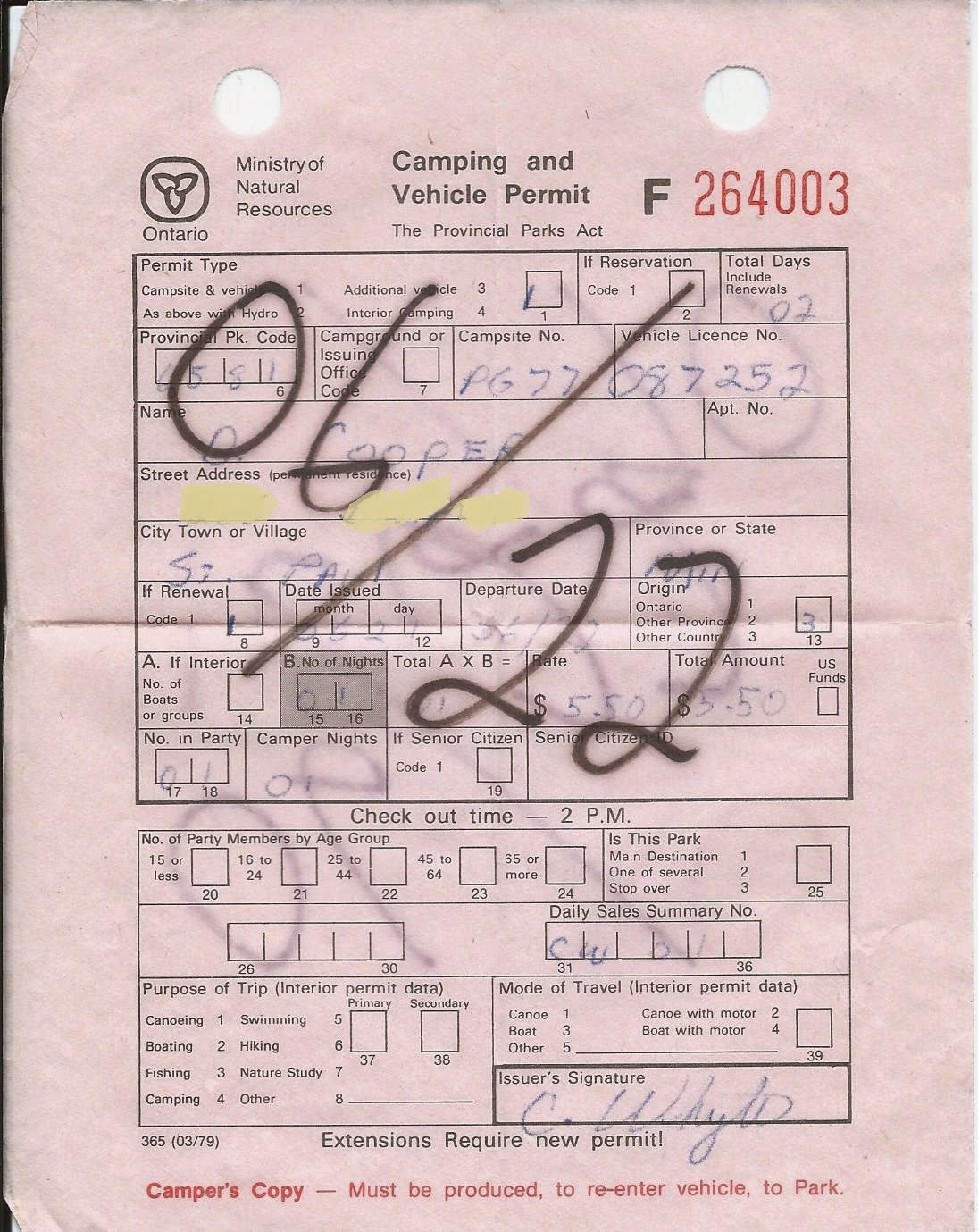 I stayed here a couple of days as well, business reasons this time.  Buckets and shims, some oil......and look at these outlandish Labor Rates!! 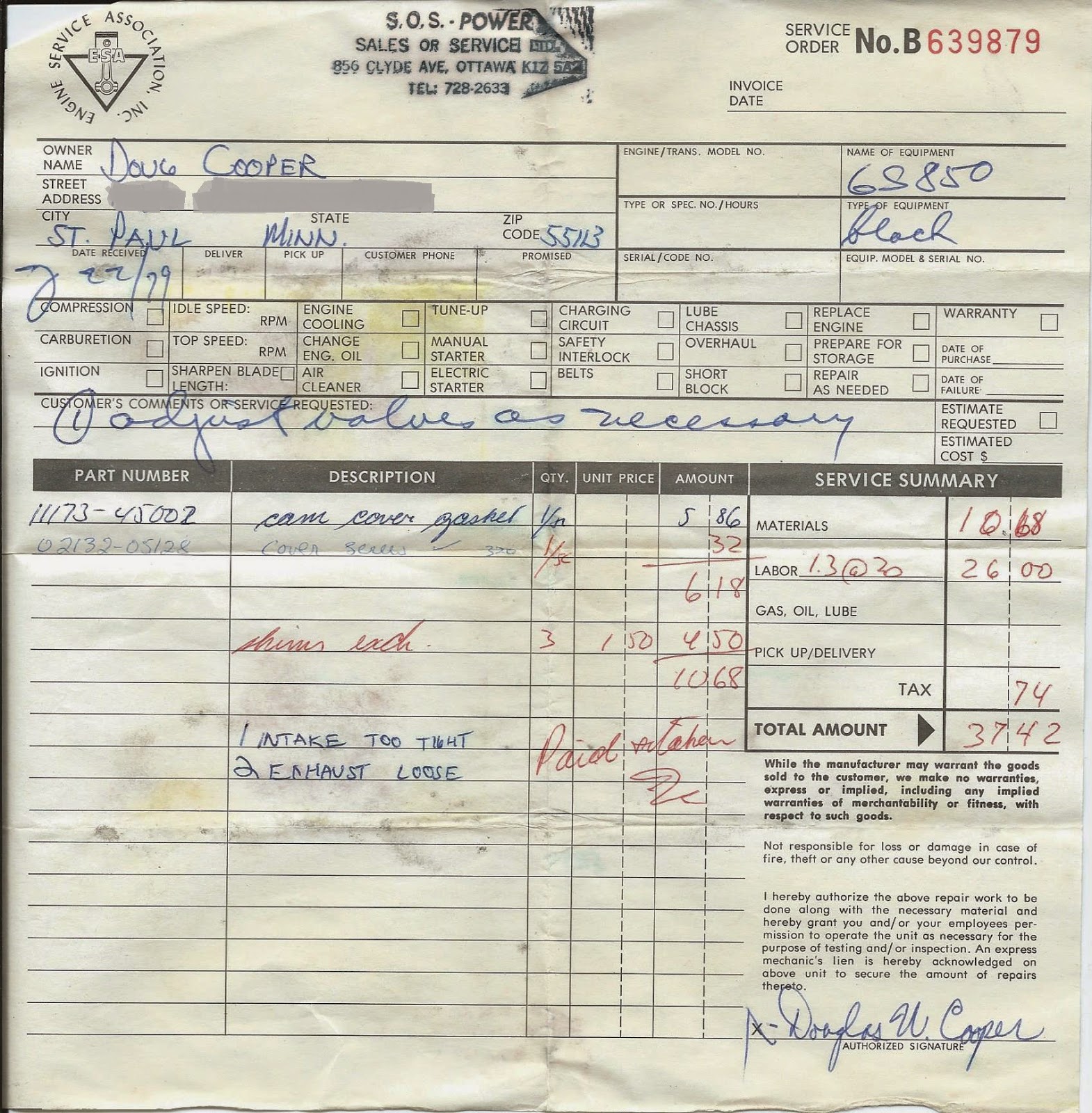 Government buildings were toured but just about the only thing I really remember was the beauty of the grounds and using a parking ramp that said "No Motorcycles" but with the attendant's permission, parking in anyway.

After getting the Suzuki's maintenance completed, I only recall skirting Montreal and though tempted to cross the St. Lawrence, stayed on the northern shore, anxious to make Quebec City.  Being close in and still wanting to camp, the local KOA seemed the logical place to stay. 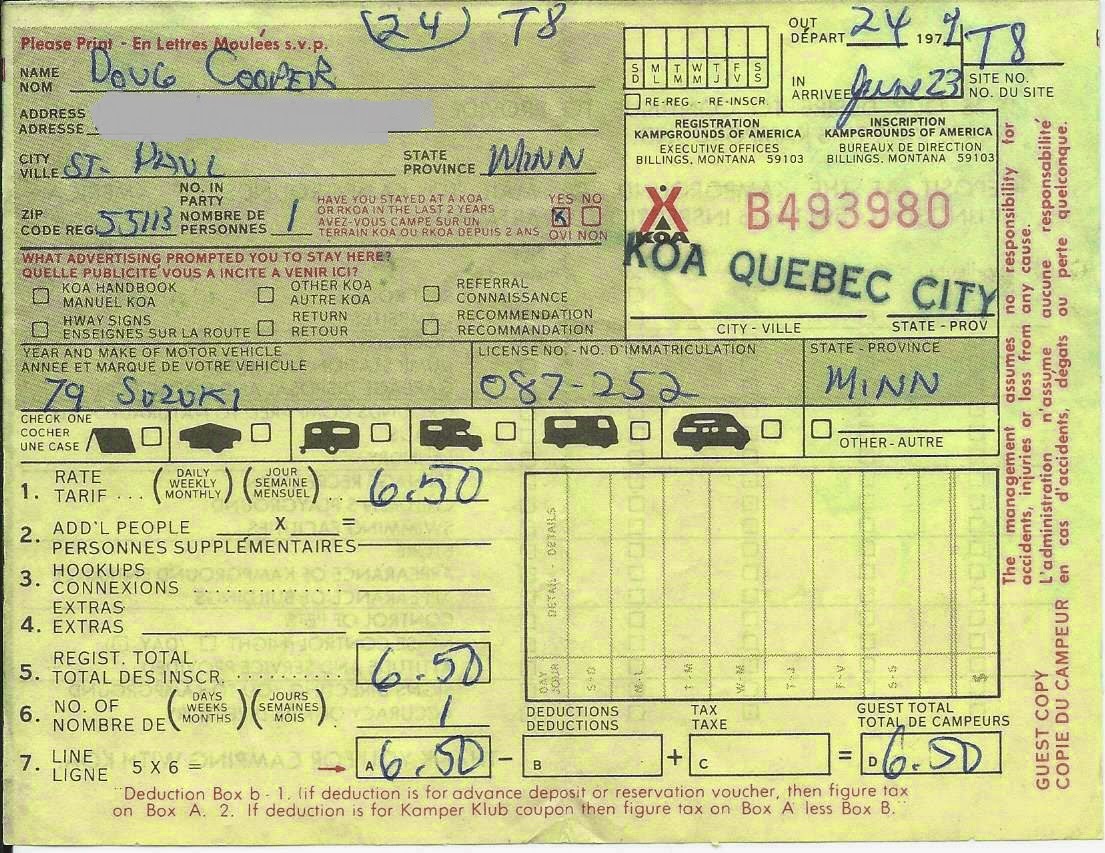 I had a fantastic time, arrived in hard rain, a wet tent but awoke to brilliant sunshine and a lovely day. There were all sorts of memorable things about my stay there.  Two things in particular jump out at me though.  This was my first exposure to women using the men's restroom as matter of fact and my very early visit that first morning was .......I can comfortably say eye-opening.

Shuttle bus tours of the old city were available and signing up was an obvious choice for a non-native.  A city that I didn't know and signs everywhere in a language I'm still not good at made it easy to partake of some initial hand-holding.  The bus tour was great fun and enjoyable.  I spent Day 2 using the bike to get around and made a mistake here......

Only a few short minutes after the above snap was taken, I was pulled over by a very understanding Quebec City motorcycle cop.  I had missed the "No Motorcycles In Park" sign and once my Minnesota License plate was acknowledged, kindly shown the way out.  I spent a lot of time those Saint-Jean-Baptiste Days walking and came back here to enjoy the park legally.

After having a very good few days in Quebec, I crossed the river and headed northeast up the south side of the St. Lawrence River to loop around the Gaspe Peninsula, documented in Part 3.