We woke to 52F degrees this morning and it has stayed that mild all day long.  The deer hunters were here early and it's a good thing.  By mid-day, they never would have been able to drive in the harvested bean fields to gather their harvest.  Our snow is gone except for the piles I created with the Plow Truck.  Everywhere else we have either deep mud or ice and in many places, both conditions seem to exist.

That meant it made my test ride today rather challenging.  I still have to install the side covers and front radiator cover on the other side.  Today's most difficult task was purging the air from the coolant system and that really wasn't a very big problem. 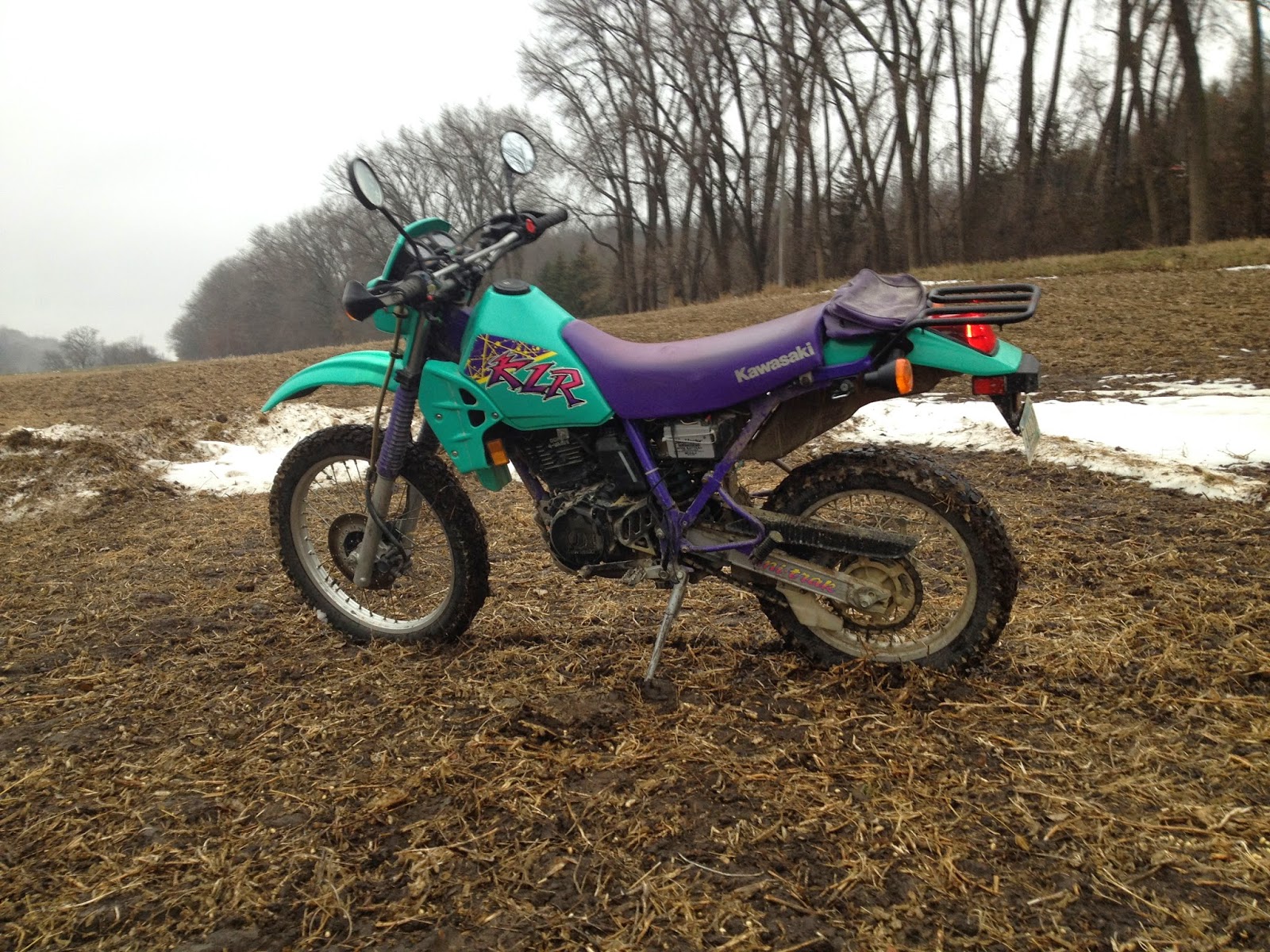 Saturday morning I finished replacing the clutch cover, taking care with the gasket this time to make sure it stayed in place.  New oil, new anti-freeze were added and all related was buttoned up.  The lift was lowered so that the carb was at eye level while on my shop stool and that was wiggled out.  Getting access to the carb was almost more work than removing the lower engine covers.

After stripping the carb parts down, it was into the ultrasonic cleaner for an extensive, hot water bath.  New pilot and main jet (thanks HandKPhil!) were installed this morning after more bathing again today.  Carb put back together and installed on the bike and once the hunters were done outside, the Baby KLR was rolled outside for the big start. 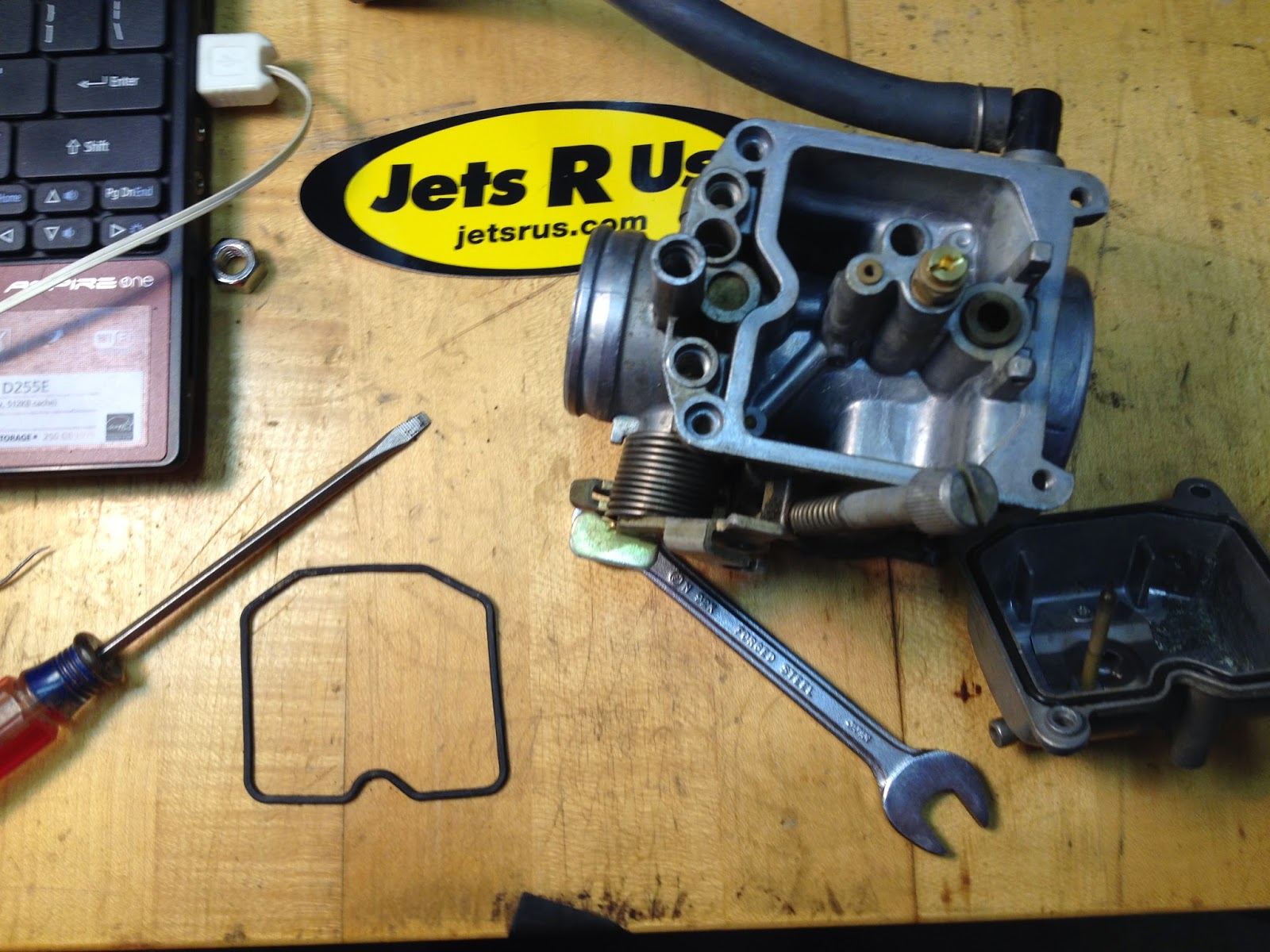 Ben has really been the only other person that has witnessed the impossibly tough starting of this bike when cold.  I was confident enough today to have him around to verify the improved starting but he was far too busy doing something else so you'll have to take my word for it.

Fired on the 4th kick after having a dry float bowl and ran on the 5th kick...... and KEPT running.  Only Ben and I know how nicely different that is; for more than one of our rides he got sweaty watching me work at keeping the KLR alive after rolling it out of the garage.  The biggest news is that it didn't take 20 false starts (40 kicks) to finally keep it running.  The choke/enrichener worked like they are supposed to....a minute of fast idle, back the lever off a bit to slow the idle down and a minute or so later, lever back to "Run" position.

With the radiator cap off, it took a bit for the air bubbles to stop and after adding small amounts of sweet green the level finally settled down.  I had the chance for the first time to see that the electric fan does indeed kick in, I'm going to assume that it did so at the proper time.  Finally the radiator cap was replaced and some more riding.  No more than 5 miles today and up to 60mph once on the pavement but we'll have to make sure next spring that the jetting is where it needs to be under load.

No leaks and an absolutely necessary improvement in cold starting.....a very nice way to ease out of winter next spring.  I'm not sure which one is next in line for some warm time in the shop but there's no time to waste, spring will here before I'm ready for it.
Posted by Coop a.k.a. Coopdway at 2:52 PM