A potpourri, isn't that what they call it?  Merriam-Webster has two definitions, one that says "makes a room smell pleasant"....that's seldom if ever me.  The other definition is "a collection of different things" and that's the one that describes my day.

Up early, I toyed with the idea of heading up to Mpls for coffee with the Saturday morning crew; it's been all summer since I've seen many of the regulars.  A cool and very crisp morning wouldn't have stopped me though a few other chores that I knew about that needed to be accomplished did.

Normally I'd have made an early pot of coffee; that didn't happen today.  Instead I drove into town to the locally owned diner for breakfast, but not until after I had the car tire with the slow leak dropped off at the tire shop which opened at 7:30.  With our schedule, unless a flat is dropped off as well as picked up on a Saturday, my available hours just don't seem to match normal weekday business hours.

Tire dropped off, breakfast enjoyed, it was off to the building supply store to pick up some lumber to serve as makeshift pallets.  Dad's sister has suddenly been moved from her apartment to assisted living and most if not all of her possessions will soon be moved into our garage for (hopefully) temporary storage.  By the time I purchased as well as figured out how to stuff it all into the car, it was time to head across the river into my beloved Wisconsin to assist Elaine and the guys with one more session of dealing with Walter's myriad of motorcycles, parts, rolling frames, more parts, motors and even more parts.  A couple of autumnal swap meets are happening soon so the guys, with Elaine's oversight, are trying to organize and price Walter's vast accumulation of "stuff".  We made a dent today and hopefully everything that was hauled away with find a valuable home with other collectors, enthusiasts and even other hoarders; whatever it takes.

This is a large, deep building with multiple rooms walled off and this view gives not a clue as to the parts and merchandise contained therein.  Walter never had one project going at once, rather many. 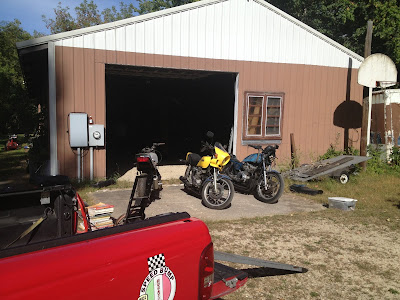 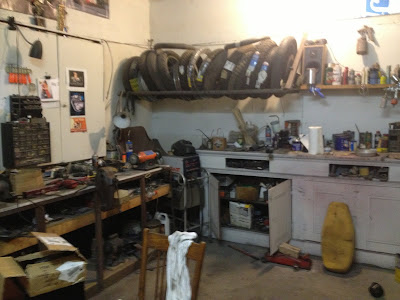 Leaving just before noon to drive back home, I got a confirmation 'come and take a look' call from the owner of a used plow truck that I'm interested in.  Since it was such a lovely day and because the Helix needed some exercise, I decided to head up to our oldest daughter's place for a quick visit and to take her out for an early dinner before the arranged truck viewing early evening.  She lives only a few short miles from where the truck resides.

On 690th, a recently discovered treasure of a road. 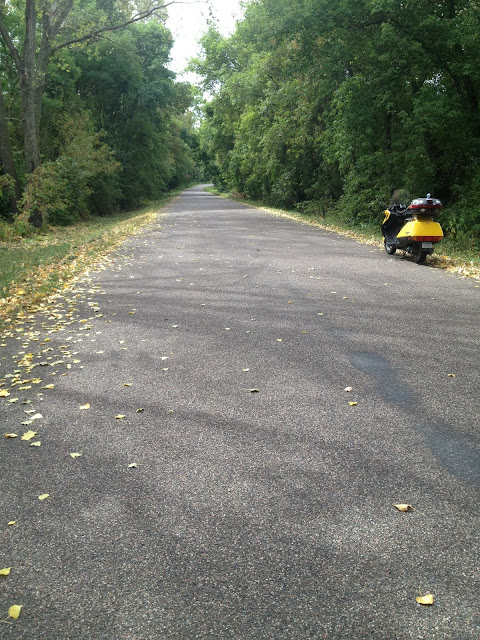 While we were finishing up our dinner, the rain began......rain that we hadn't seen for weeks and rain that I'd not ridden in since mid_May when Dave, Justin and I went to the Madison, WI BMW group's Great River Road Rally.  I found Joe's address easily with the help of my GPS, driving easily to his home.  He grabbed a raincoat, I inspected his truck with my helmet off but with my Darien Light jacket and pants on.  I liked what I saw for the price, we'll see what happens. 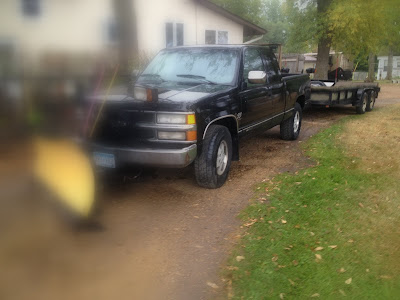 The two hour trip home was wet, sometimes the rain was only light, other times heavy but it never stopped.  I stopped for a self portrait, not really doing the rain or myself justice :)  Uncharacteristically, the Helix had a few hiccups this afternoon and my guess is that it had more to do with non-use than it had to do with the rain but that will be checked.  It hadn't been ridden since my July 4 morning's ride.

Some of the scooter's bugs were washed off, the dusty dirt on my jacket was aggravated but I stayed nice and dry, making for an enjoyable just-before-dark ride home. 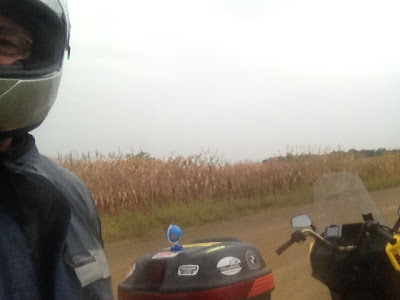