In 1968 I was 13, my brother 12 and the riding bug began for us both.  Dad had ridden various Cushman's and Harley's as a young man, in fact his dad had ridden as a young man and it was our grandfather that really allowed for and locked in our interest in riding.  I remember it well; a nice summer day in northern Wisconsin, our family in a white '70 Dodge Polara wagon and as we rounded the corner into Gramp's driveway, there it was, a bright yellow, 1964 Honda C105, 55cc's of 3 speed semi-auto power.  This power could be multiplied with an overlay sprocket (72 teeth) that provided a realistic top speed of ~25mph rather than the too-much-for-young-teens ~40mph that the smaller, original sprocket allowed.

Gramp's 'wide spot in the road' rural village in Wisconsin allowed for a very large lot, much of it filled with garden patches elegantly placed around the property where the soil and topography would allow.  Mowed pathways connecting the garden sections were our roads, larger sections of lawn were our parking lots.  Brother and I literally wore out the grass with our weekend riding.

Handy with tools and 'tinkering', Grampa Allen built a low-sided wooden rack to fasten on the already oversized chrome OEM Honda luggage rack, a safer riding perch for his dog.  I can still see the quart Listerine bottle that he drilled a hole in, an auxiliary fuel tank that Gramp pre-measured 128 ounces of leaded regular into.  Around the local area's rolling hills, he was able to go slightly more than 128 miles.  His large smile is still with me, "A mile to the ounce" he proudly proclaimed to most anyone and everyone that might even remotely care. 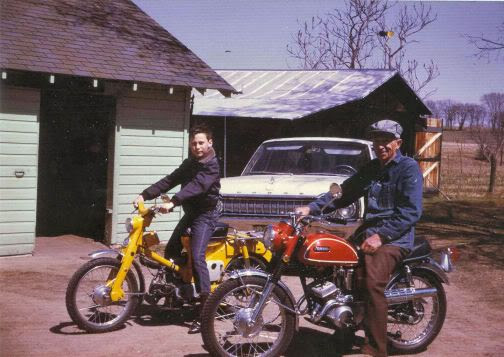 Once Gramp had his new Yamaha, we bought the '64 Honda from him.  It didn't take long before sharing the yellow Honda between brothers became challenging.  Both of us were more than ready for some more power and speed.  Our neighbor in St. Paul had purchased a 1970 Yamaha AT1 enduro, his intended use to be hunting.  Before long it was for sale and even before I was legally able to ride, I bought it. 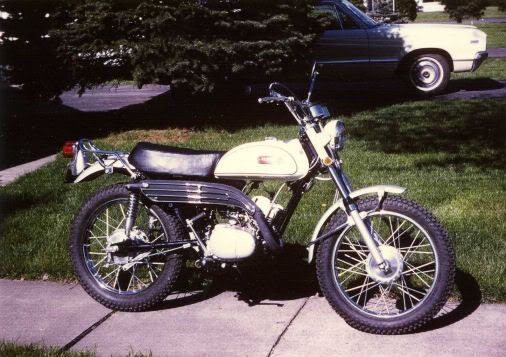 As you can see, the AT1 hadn't seen very severe hunting action.
Posted by Coop a.k.a. Coopdway at 9:45 PM