Another early trip up to Diamond's for coffee yesterday (in the van, not on the Yamaha) and then over to GoMoto to pick up my newly mounted Breva front tire.  I got a couple of R.E. oil filters as well as long as I was there and an optional rear fender that I might or might not install.

Turnout was good, the weather extra nice and warmer; good things on a Saturday for coffee drinkers that ride.

Mike was there with his newly enhanced Helix and his I-don't-know-how-much-increased-performance.  Flip the switch and the hook-up rotates.  You probably won't see many of these. 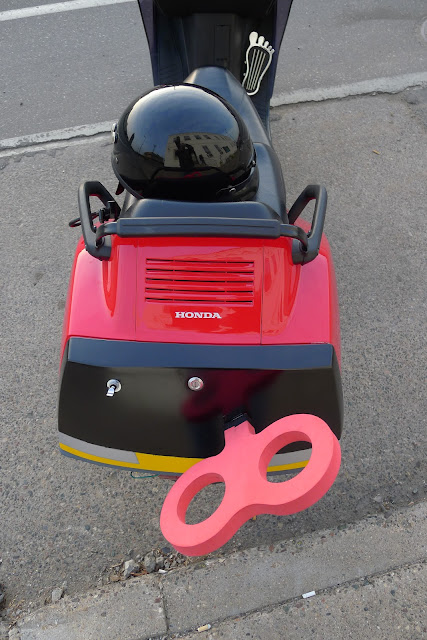 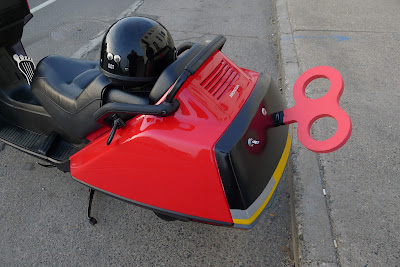 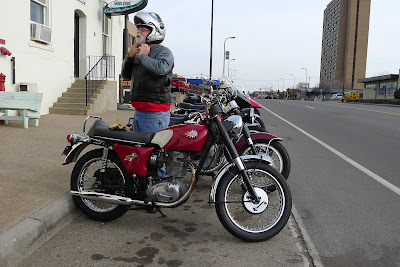 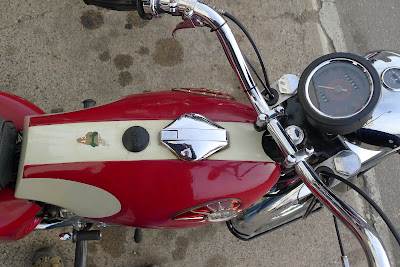 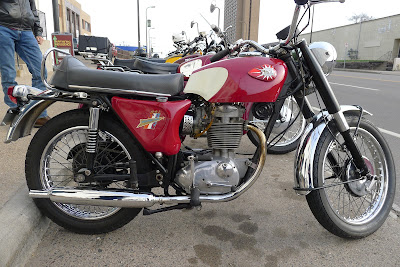 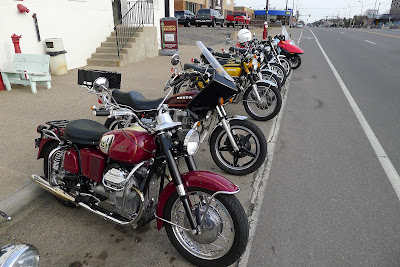 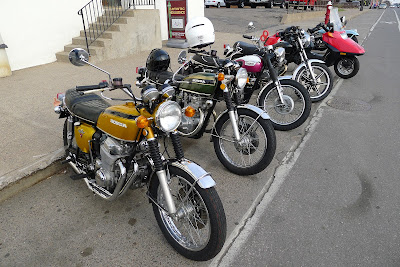 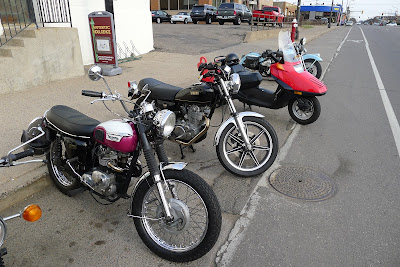 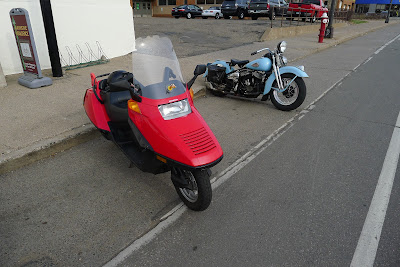 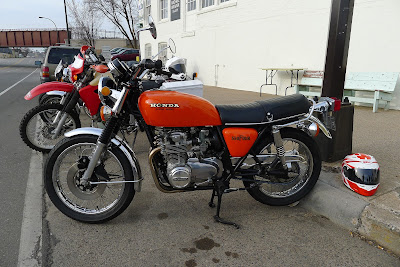 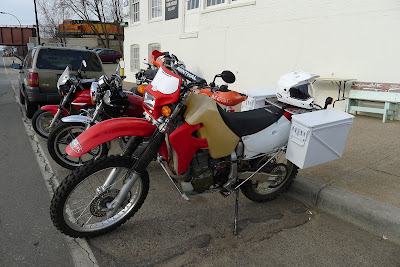 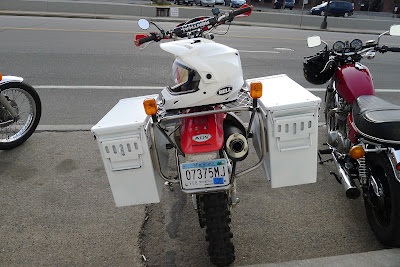 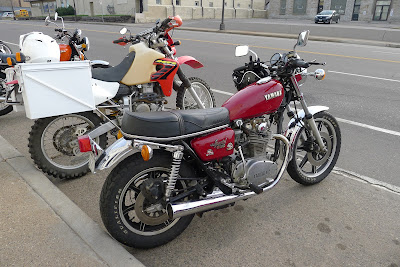 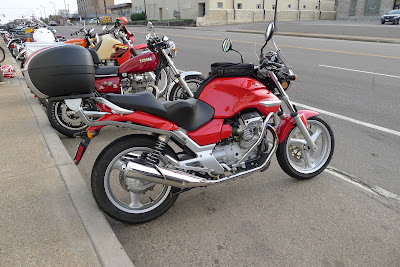 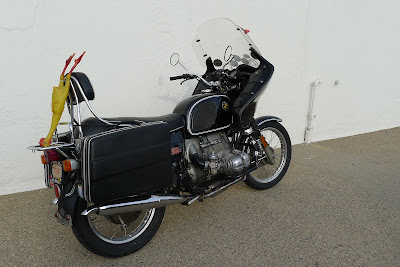 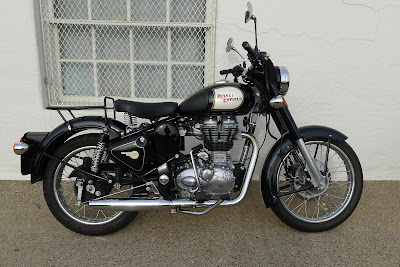 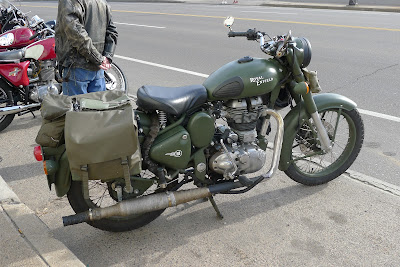 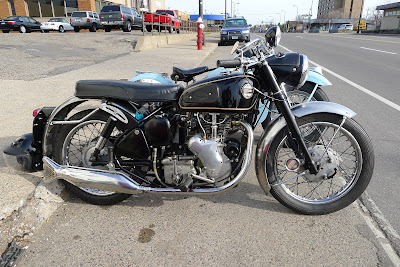 The big plan was to get my newly mounted Continental tire installed on the Guzzi and then out for its first Go of the season but the weather so fine and me in too big of hurry....The TW200 was together, right in front and just as deserving.  It hadn't been in the shop for any '17 "updates" ...time for that later.  New tabs slapped on, a few ticks of O2 in the tires, 5 kicks and off we went.

Last weekend there was a gravel bicycle competition in the area and this road was on their route.  There were literally a hundred small tire tracks in the now much firmer mud.  I was glad I had the Yamaha. 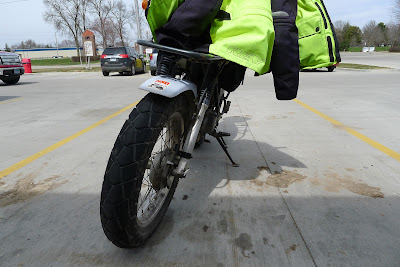 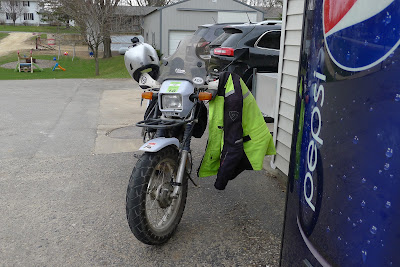 My bicycle Sigma and the GPS trip meters close enough for the roads that I go out with. 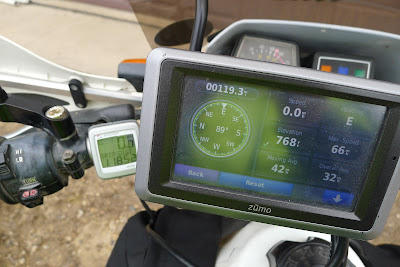 The plan was to stay off the bikes today (Sunday) but darn, the morning was just too nice.  Eric had written that they'd be gathering for breakfast and I turned them down, staying true to the aforementioned plan.  Spending some time out in the garage and then outside turned me;  front wheel on the Breva, a text to Eric about an early lunch gathering and the Plan Foiled.

I started out early so that I could make a loop, as Eric paraphrased this morning, "taking the short way is just about impossible".  The trees are showing spring color, their buds doing what they'll do. 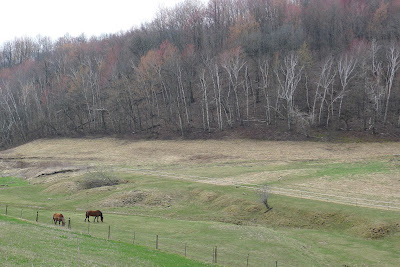 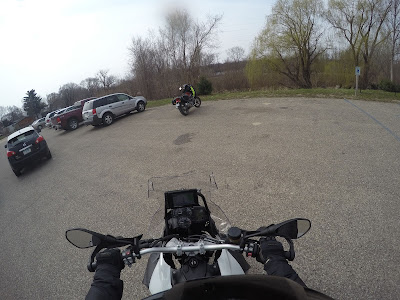 That lump over by the white tank is me enjoying a cup while I waited though as usual, Eric was right on time. 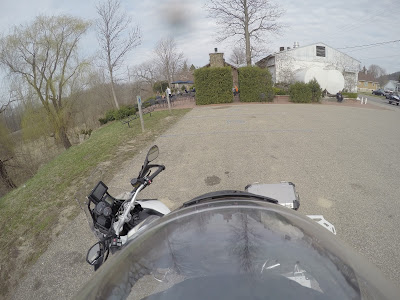 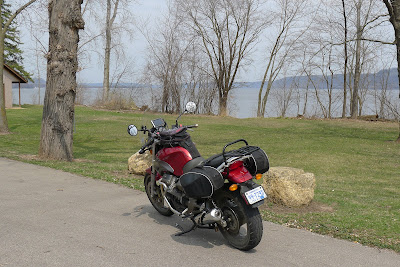 Still getting comfortable with my new modular helmet, hopefully I'll get use to removing the helmet without constantly dealing with my eye glasses.  A bit more breaking in should help.