This Post, my 3rd in as many days (hopefully I'm not over quota) has nothing to do with 2 wheeled machines.  Enjoying a quiet and restful evening at home after a long Monday at work, trying to get caught up with some of my woefully behind correspondence, Peg had a question.

"What's that piece of packing foam out on the deck railing?"

My headphones were on and we were just coming to the cadenza.  I pulled both sides down for a repeat.

"That foam, it looks like some packing for one of your motorcycle part shipments."  (Snuck an m/c reference in this non-motorcycle post anyway)

Dumbfounded, I needed more clarification so asked her to start back at the beginning of this very short story.

"Foam, on the deck railing...where did it come from?"

She's seen that very same blank stare many times....sometimes it's real, sometimes I can fake a pretty good one.  I hobbled barefoot out on the deck, kitties thought it was time for evening feeding #2 but they were sadly mistaken.

Stepping over to the 'thing' on the deck, I looked it over very well before touching it and was even more surprised by its presence, look and feel than Peg was.  Turning it over in my hands, its base gave it away, the location where it had been attached.

Just then Lauren came through the door with a plate and some associated flatware.

"Isn't this the coolest mushroom you've ever seen?  There's lots of them!" 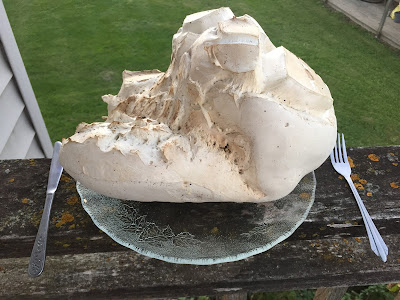 So there you have it.  It isn't just the plate either.....I can easily imagine a very impressive dollop of meringue here, served and ready.

Jason nailed it, a giant puffball and very edible in the right conditions, conditions we decided that this one lacked.  There was a shade of green centered around the core that was much brighter to my eye than these photos express and the 'cover' near its base was actually quite thick and tough.

"Pungent" is what Lauren called it when we cut it open.....I was still smelling the smoke from the charcoal grilling I'd done an hour before.  The length of the metal cutting section of this knife is 8" (20cm) long.  Lauren's hand on the right to hold it steady.  Quadrillions of tiny open cells. 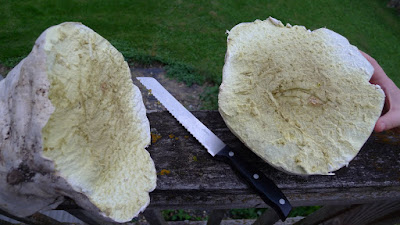 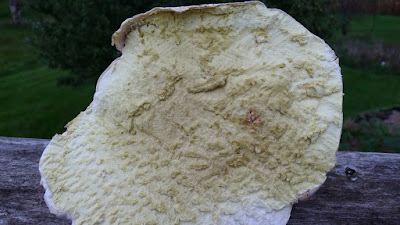