Well maybe not an official designation, at least as far as I know but it certainly seemed that way in my little world.  It was all a matter of chance that these two reads dropped into my lap last week.  Reading, or at least any large quantity of it is something I normally save for weather more foul.  Nothing wrong with an early start this season  or so it seems.

A week ago on Saturday, I made one of my more rare in-season visits to Diamond's for Saturday morning coffee.  Richard was there and once off his new-to-him Vstrom, he handed me a nicely used copy of Neil Peart's Ghost Rider. Only vaguely familiar with Peart's background, his role with the band Rush and relatively recent family tragedies as well as his love of riding, I was very anxious to dig right in and start the book.  As Richard handed the book to me, there were more than one of the other fellows mentioning...."when you're done...."

Richard's words were, "pass it on when you finish."

So, Saturday evening I found a quiet spot at home (most of them are) and got started.

Sunday, at least I think it was on Sunday, I finally took the time to try and get caught up with some of the other blogs that I follow and one of the Comments on Sonja's blog regarding her current Maritime ride caught my eye.  Made by Conchscooter, a book recommendation that really sounded interesting and right up my alley was suggested.  The Kindle version he mentioned specifically made it even more so.  In an hour my copy of Nick Adams' book was waiting on my own personal device.  Mr. Adams' book is Beyond The Coffee Shop: Riding 1970's Moto Guzzi Motorcycles in Northern Canada.  See what I mean?...it has everything going for it; I can't imagine more engrossing subject matter. 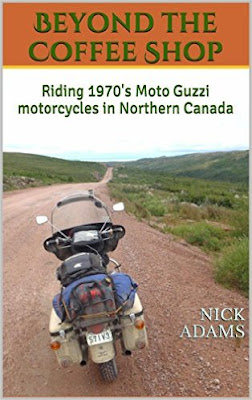 Peart's Ghost Rider starts out from Quebec though he's ridden on more continents and in 10X more countries than I'll ever visit let alone ride in.  By the beginning of chapter 5, he's ridden across the Canadian prairies, north of the Arctic Circle, back 'down' to Anchorage, boarded a ferry and is with family in Vancouver.  From what I understand, this trip has just begun.

Nick Adam's book was a quick and fun read, his rides described took him from southeastern Ontario to the northeast up the St. Lawrence valley into Labrador, northern Quebec teasing the eastern side of James Bay and/or to the northwest towards far north Ontario.  Low tech, older Moto Guzzi's and long, desolate gravel or worse roads are what make Nick happy.  He's owned more modern versions of the Italian marque but he's no hesitation whatsoever about heading towards the remotest sections of the northern Provinces on the old '70's bikes.

It has been a week full of Canada and that is not bad.

Two summers ago I toyed with the idea of visiting the Canadian National Moto Guzzi Rally near Lavigne, ONT.  Had I gone, I'd at least have had the chance to meet Nick.  Whether the Ontario group hosts their own or the National Rally, Nick attends.
Posted by Coop a.k.a. Coopdway at 7:51 PM