It's dawning on me that just about the only riding I did this summer was to/from/during the numerous rallies that I attended.  It's been mentioned here by some blog readers as well as by myself that these days quality is fully capable of offsetting quantity and I still stand by that assessment.  Still, as summer has all but slidden away, this guy just has a natural tendency to improve the situation.

Yesterday was rain-free but cool (very cool) and the blustery was almost too much of a good thing.  Our weather folks have been announcing that we only had a record 2 days of >= 90 degrees this year.  It almost sounds like they are complaining about that fact.  I will not complain.  It seemed like a glorious summer once it quit raining and finally did warm up.....warm up to just the perfect range.

So, yesterday was cool but I was out and put 98 miles on.  This morning we had high 40's when I got up and long before it turned 60, I was off for a breakfast ride that quickly turned into 165 miles.  A "ride to dinner" promise was made to son Ben, so I was home early afternoon and the two of us went out for another 120 miles or so.  An almost cloudless sky with temps in the lowest 70's....absolutely perfect riding weather. 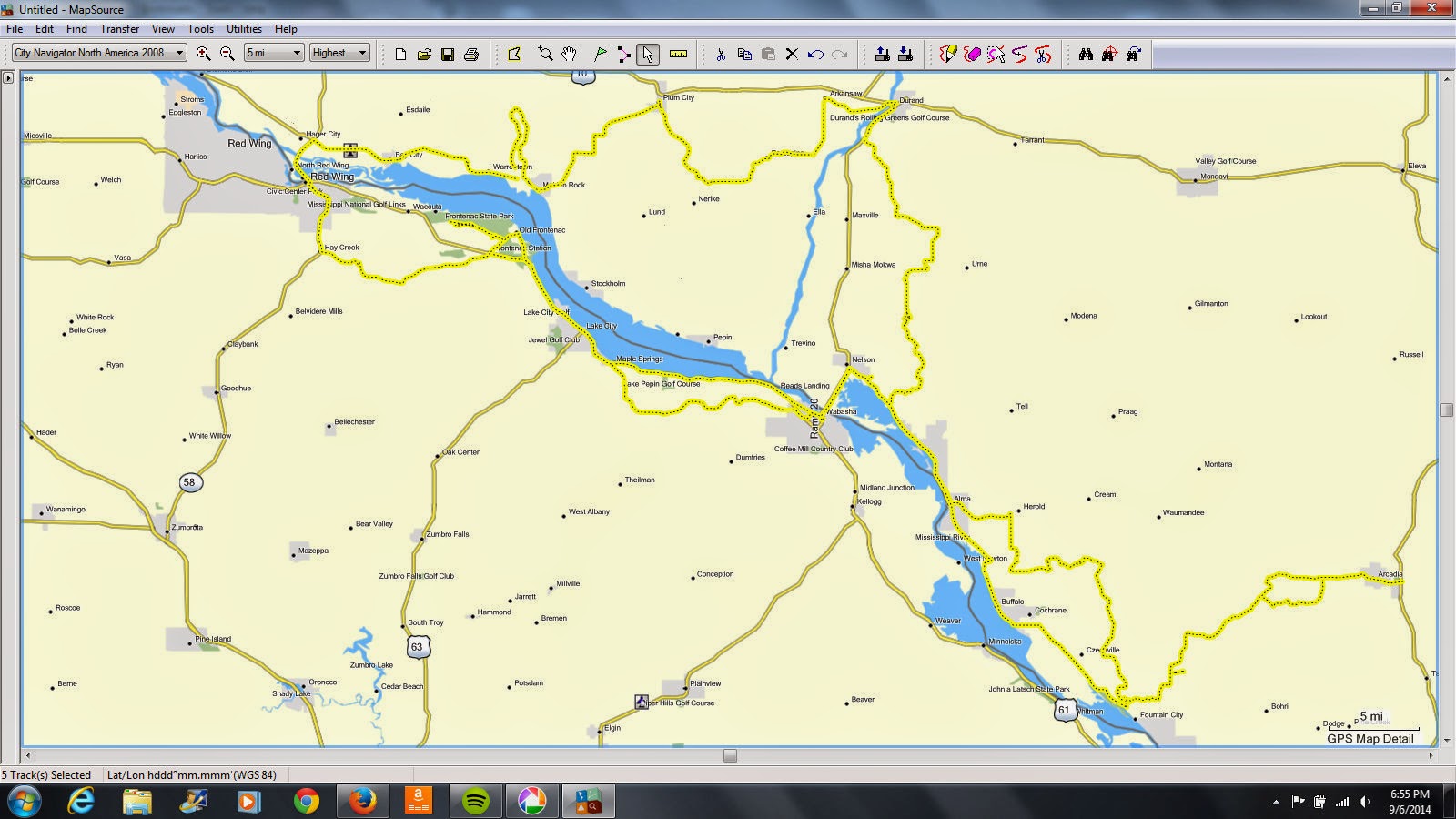 Does this 'summery' scene look familiar?? 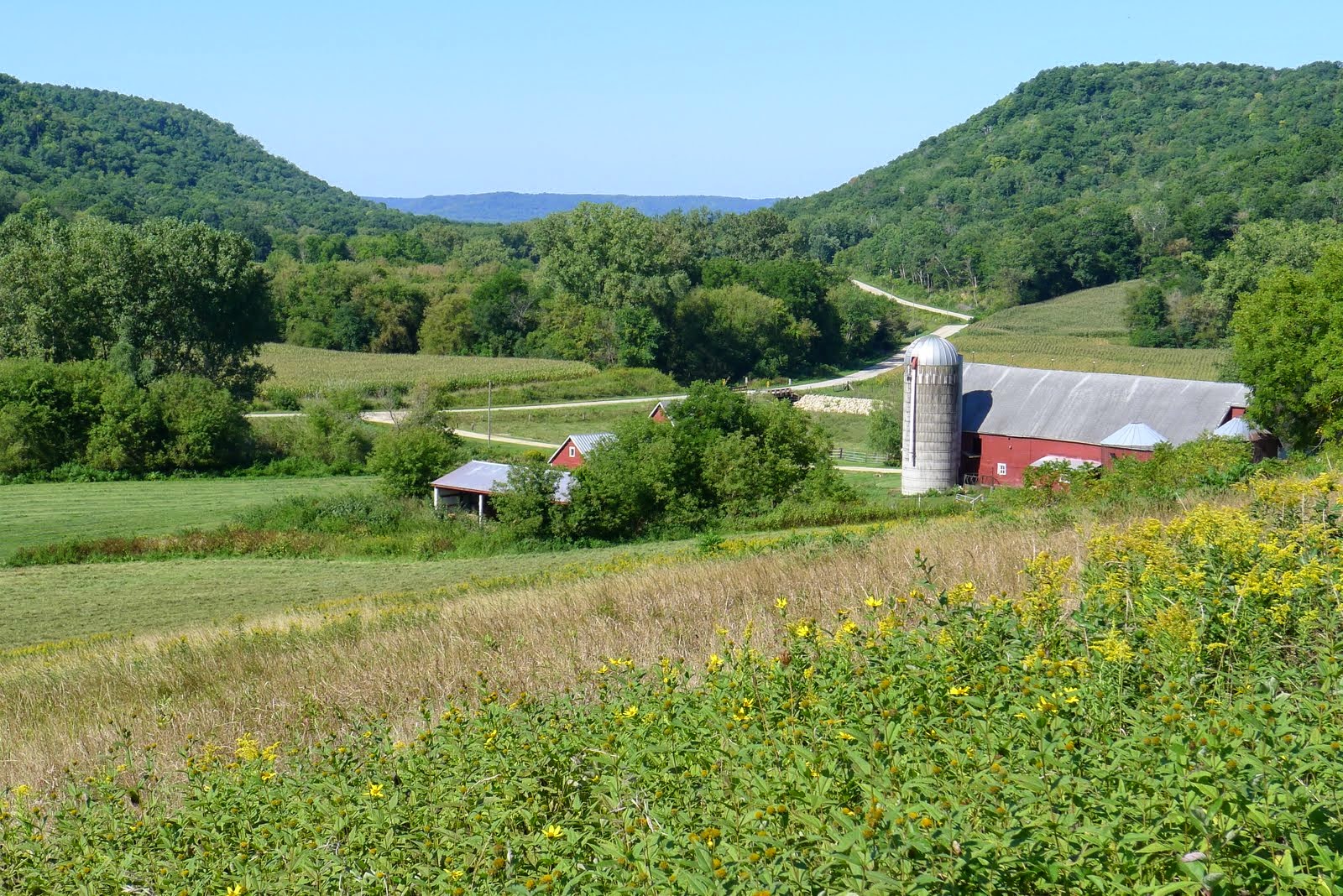 Earlier this summer I stopped for a break in Arcadia and had the good fortune to meet Eric and his wife, our meeting a very good thing.  We've now ridden some miles together and communicate often, each sharing explorations with the other.  Today I stopped at the same location and met John, recently back from Sturgis.  John's HD has 115K miles....."still has the original clutch...bike's been a good one".  I didn't ask but feel confident in saying that John's got a substantial bit more 'experience' than I. 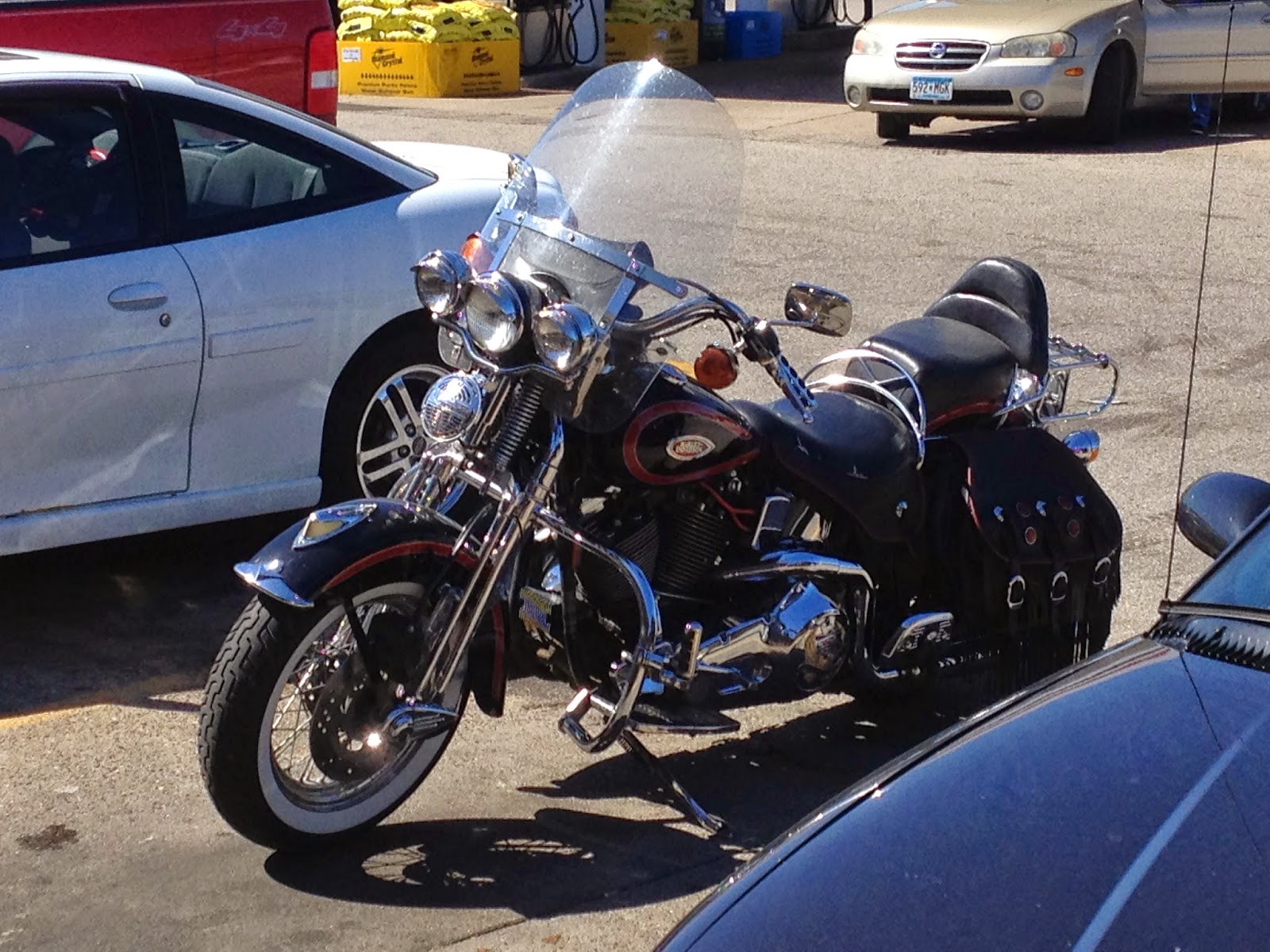 I stopped at this Century Farm, the place belongs to a family that have been friends with my parents for many years.  A magical farm in a magical setting. 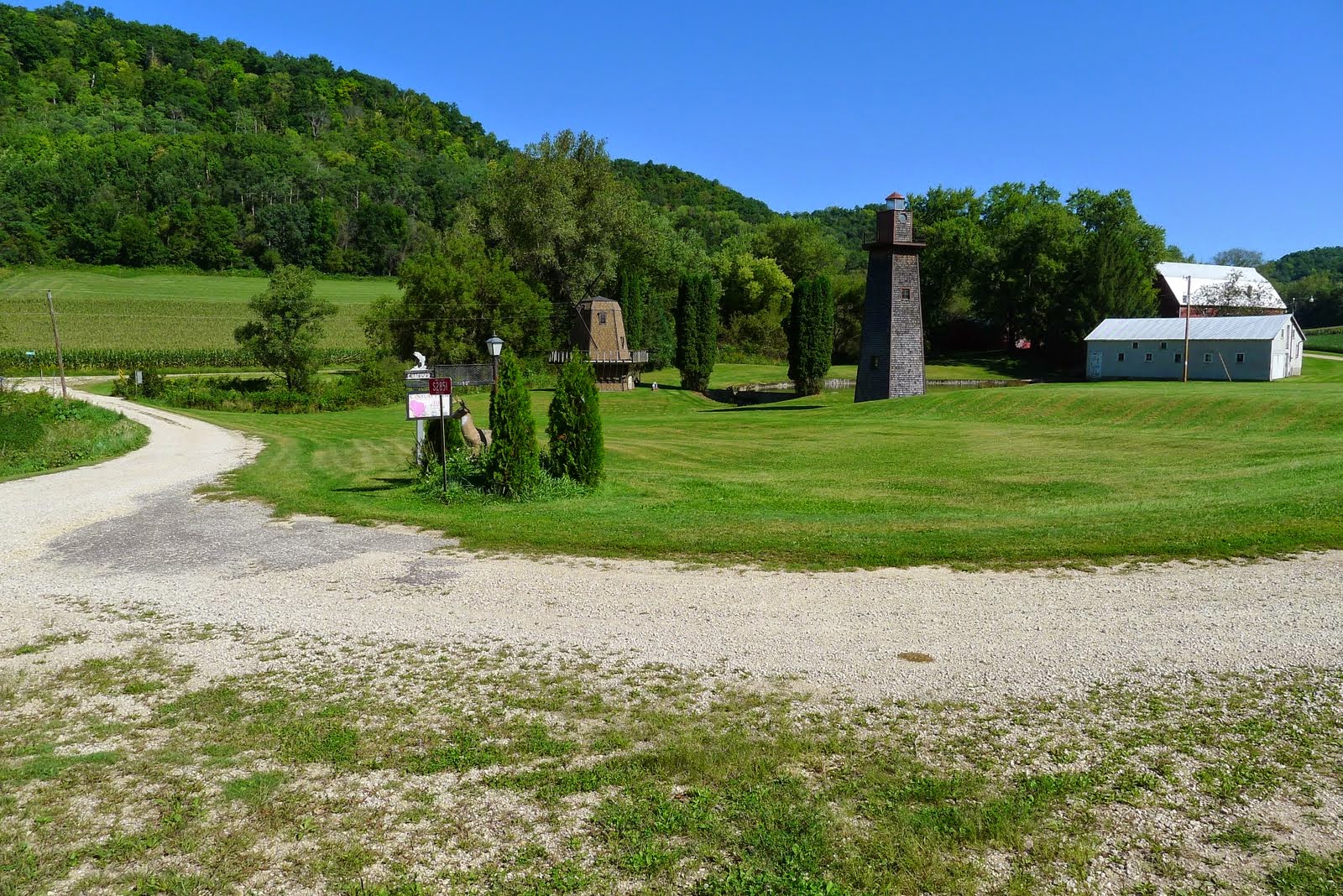 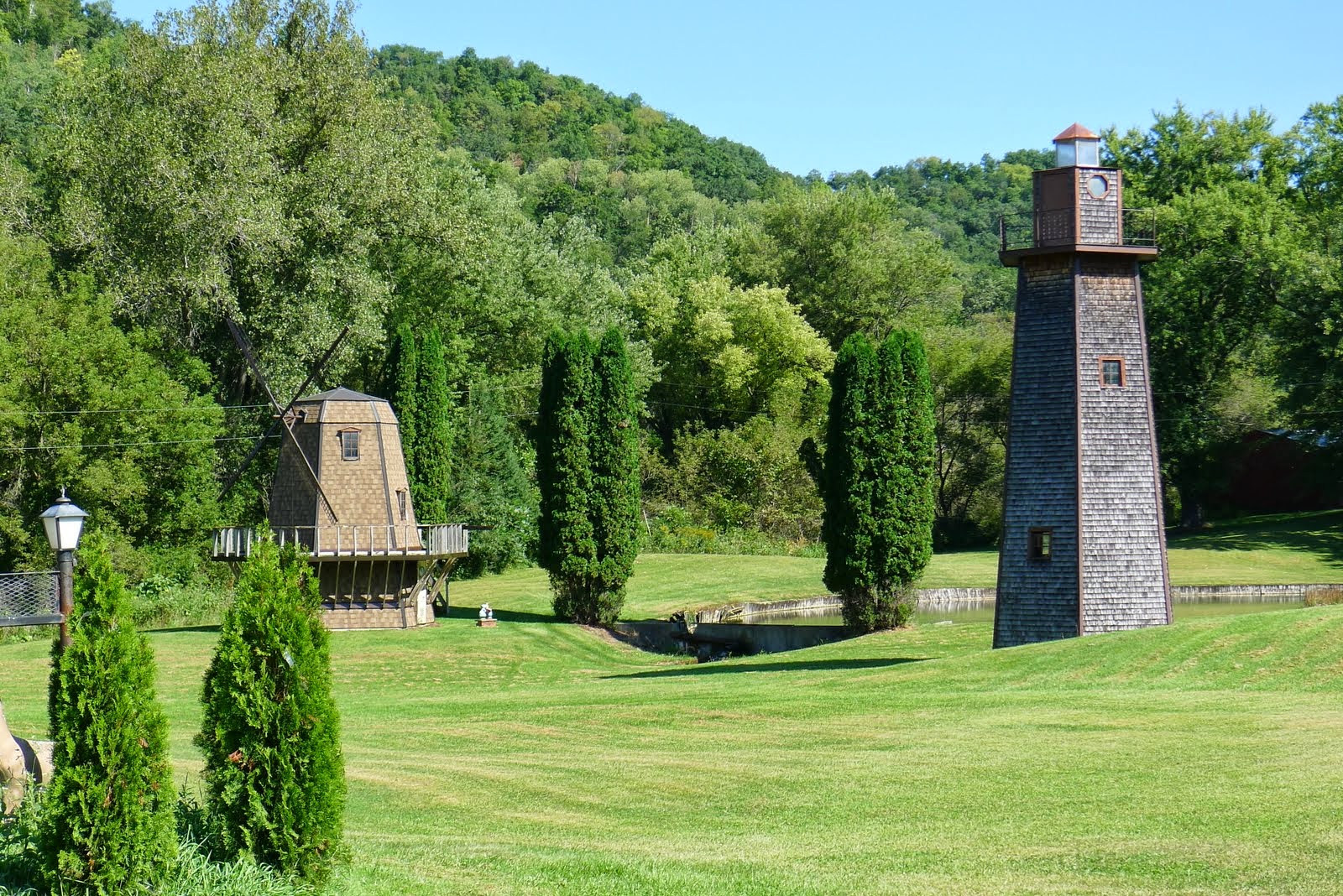 From there I went home, took care of two quick chores and then had Ben join me.  I started out on the Ascot, Ben took the Guzzi.  Here we stopped for an afternoon ice cream in Bay City.  The caboose used to belong to the Soo Line Railroad (connected MN/IA/WI to Sault Ste. Marie) but as you can see, an "M" has been substituted for the "S", not surprising in a Dairy State. 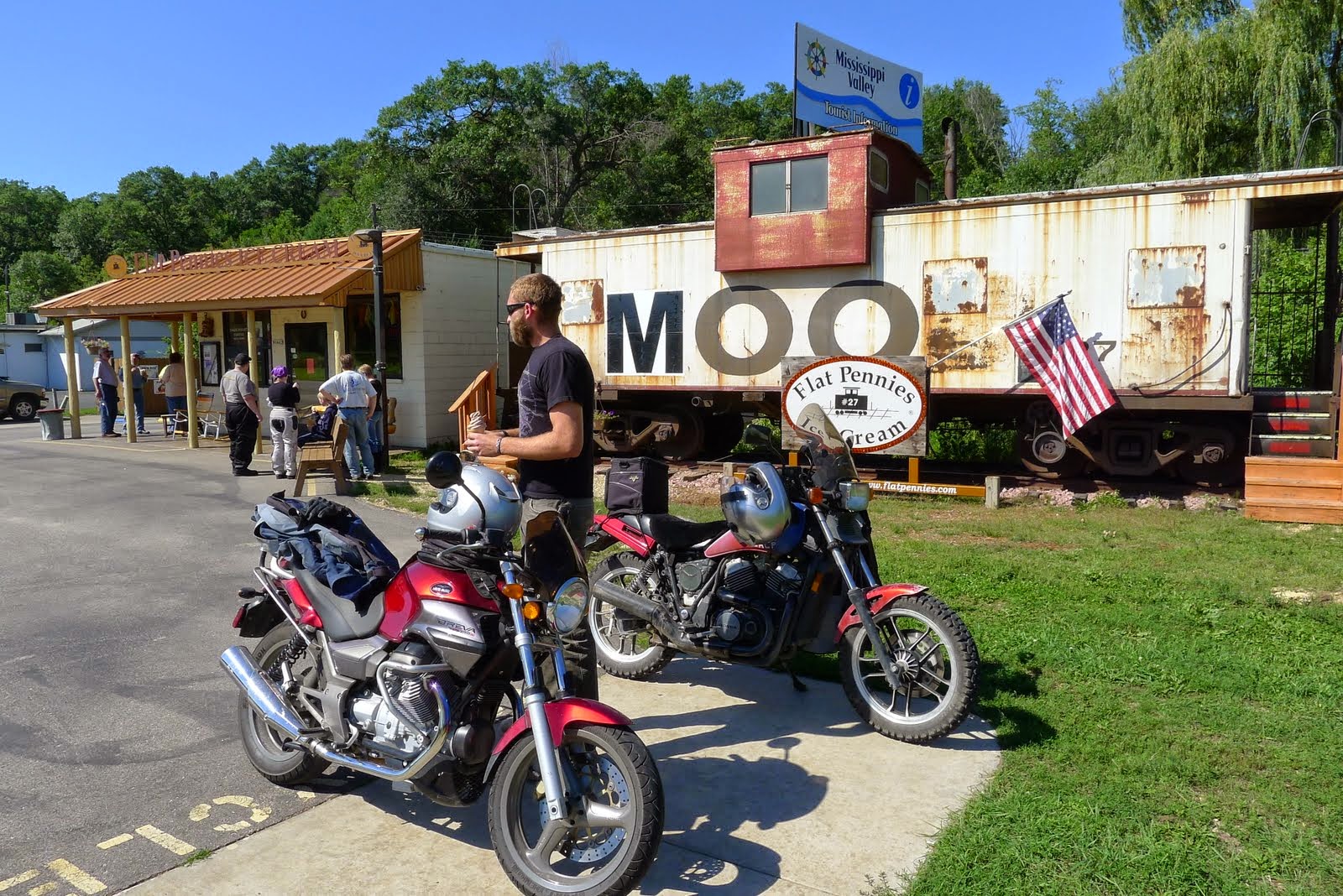 Showing Ben some of my favorite roads, slow ones as well as some that were faster, we arrived here in Plum City for a rest stop and a chance to watch the very calming and peaceful trout swim in their pond. 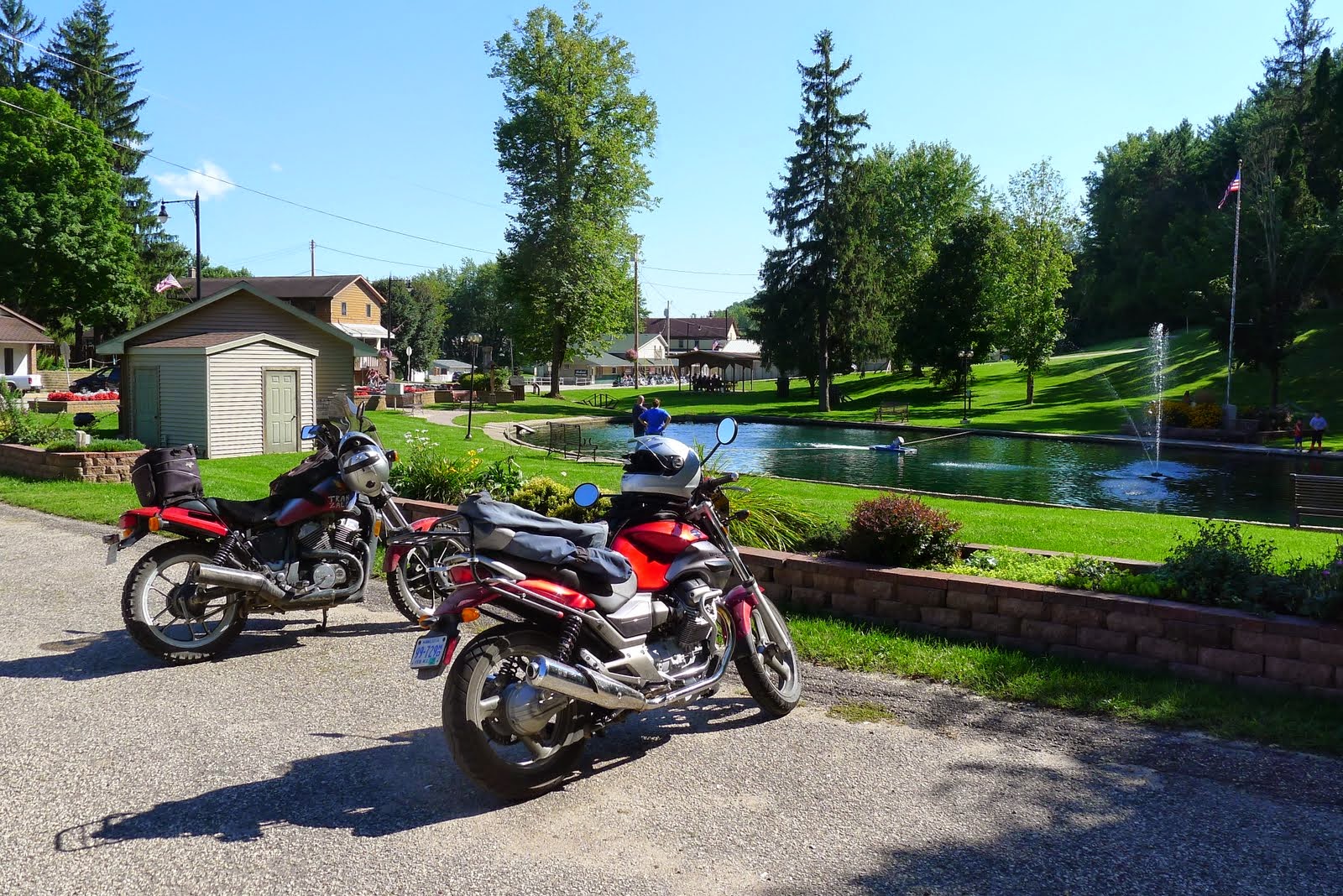 When we left Arkansaw (Wisconsin's version) and crossed the Chippewa River into Durand, I almost couldn't believe my eyes.  MORE heavy rain in the area had the poor river flooding once again.  We stopped downtown to take a closer look. 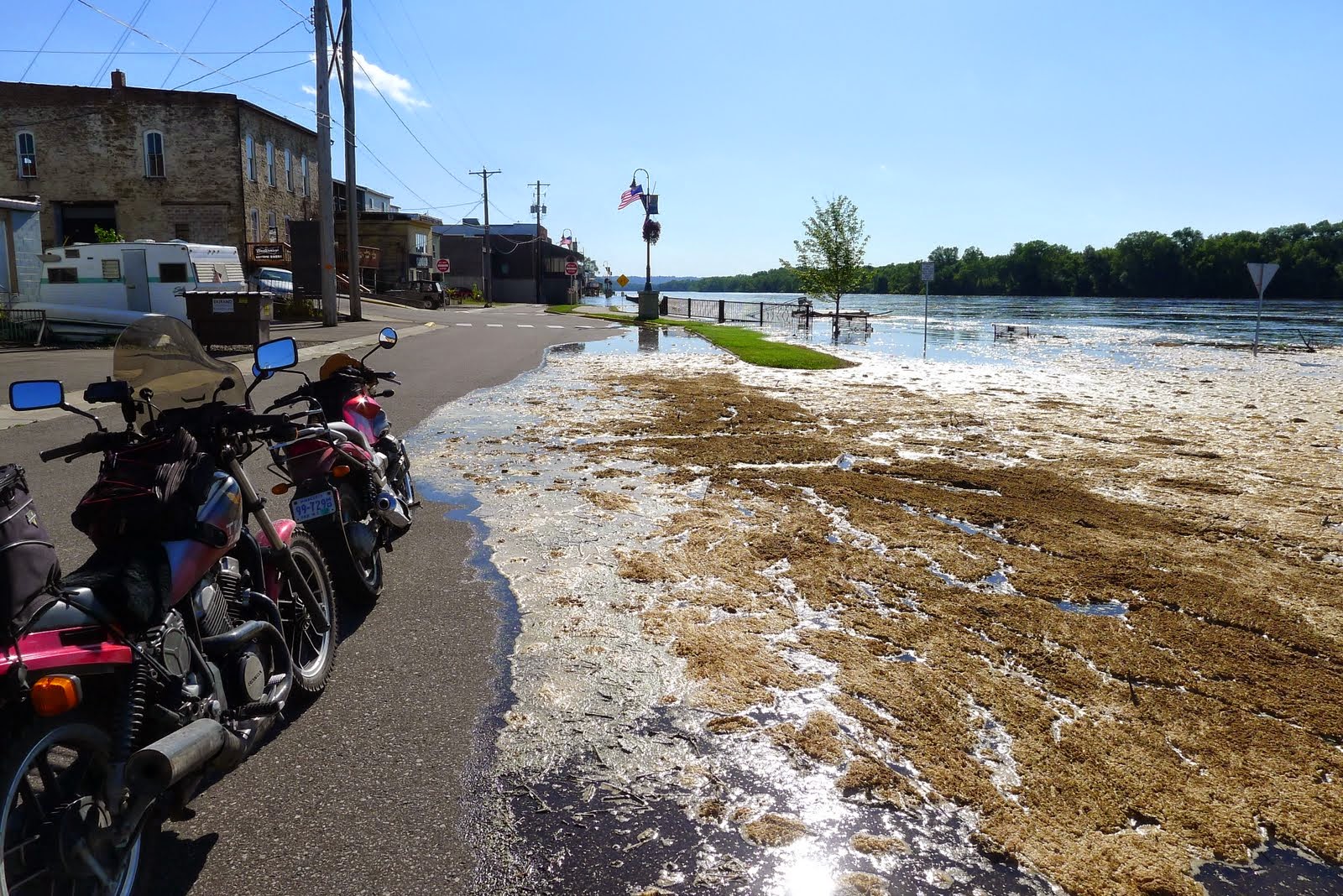 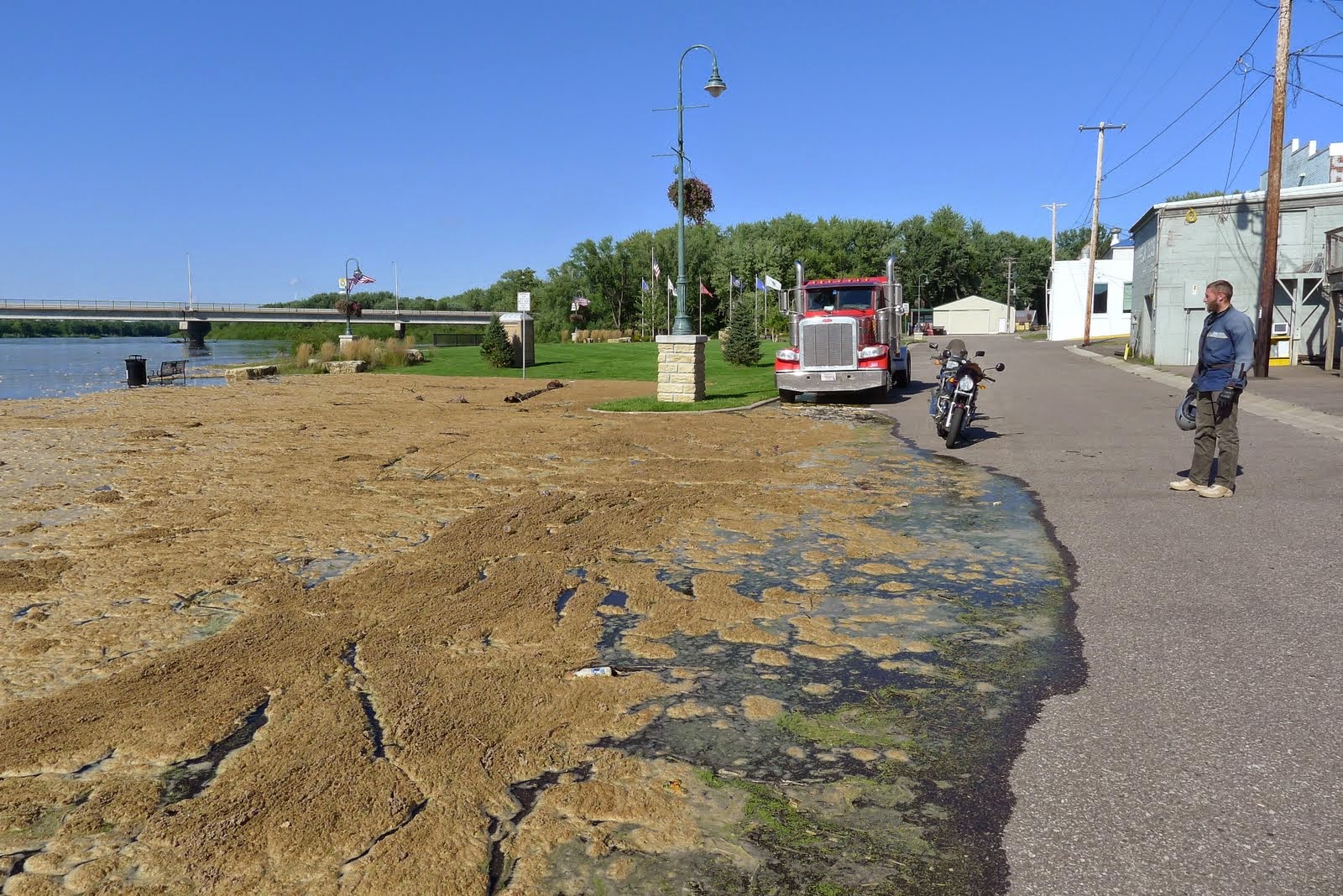 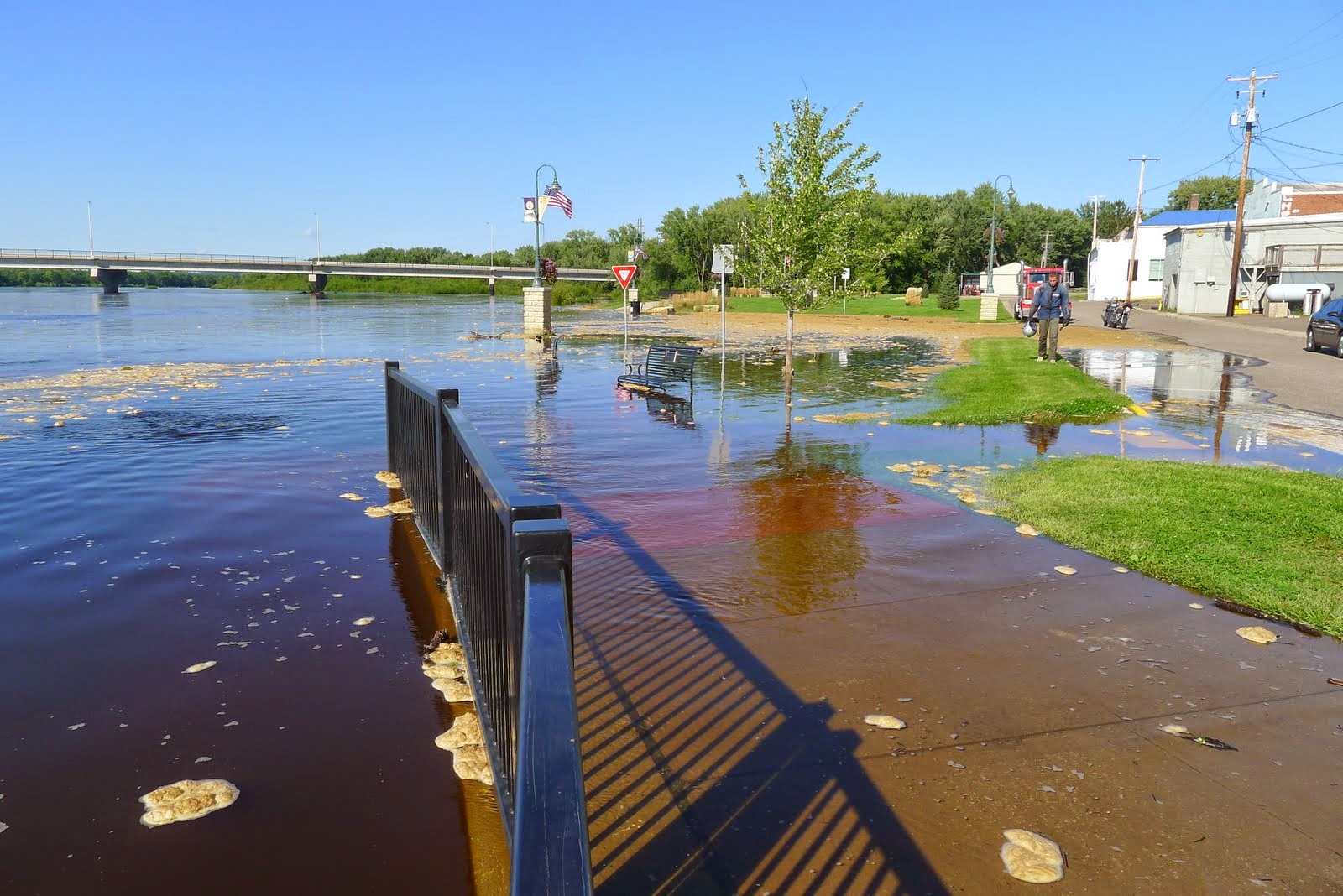 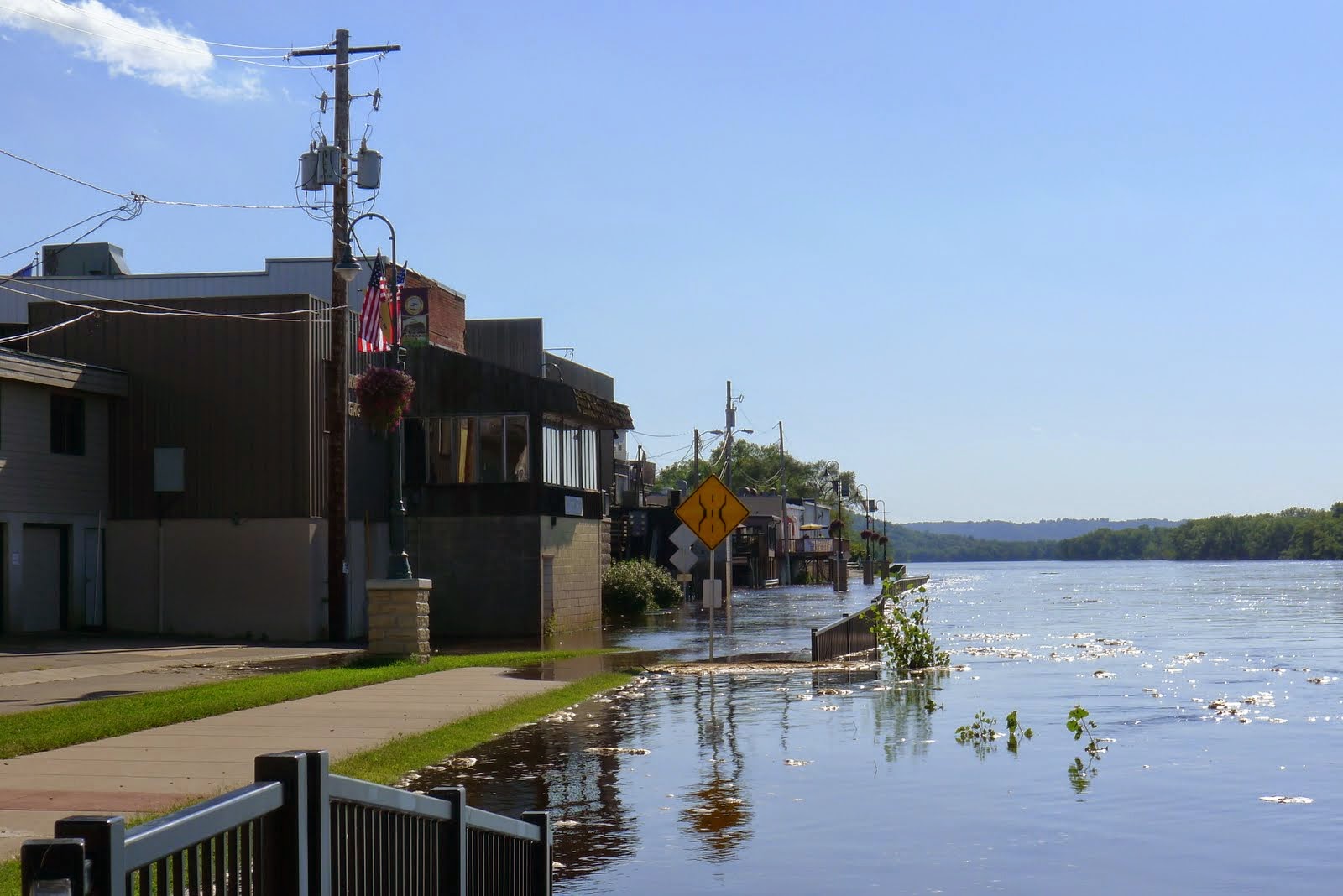 We stopped for dinner while still in the neighboring state, crossed the river back into Minnesota and took the back way, one more time, to our home valley.  Ben was a bit awestruck both at the roads I "knew" and how much fun they were to ride on today.  We swapped bikes for a few miles, he preferring the Italian one to my old beat up Honda.  The Guzzi was his favorite until we got home.  I sent him out on the Hyosung, his first ride on that and he came back with a huge smile.  I may not be able to keep him off from the little V-twin from here on out and I think I know how he feels.

There's a fighting chance something will get ridden tomorrow, same lovely weather predicted only slightly warmer.
Posted by Coop a.k.a. Coopdway at 7:59 PM