We've been working longer hours, home later, then a few chores and before we know it, time for bed.  Even with the longer days, evenings seem woefully short lately.  It would help if it would quit raining since Rain + Early Summer = Mowing.  Once per week hasn't been enough and I'm not one of those yard fanatics either.  When I do get out there to mow, it never fails that it should have been done a few days previous.

Just a bit over a week ago, friend Dan wrote that a long time friend of his had a bike for sale.  The email went out to over a dozen people, addy's and names I recognized...."Bike for sale, thought I'd put the word out to help a buddy....."  I responded first, called and bought the bike over the phone, sight unseen. 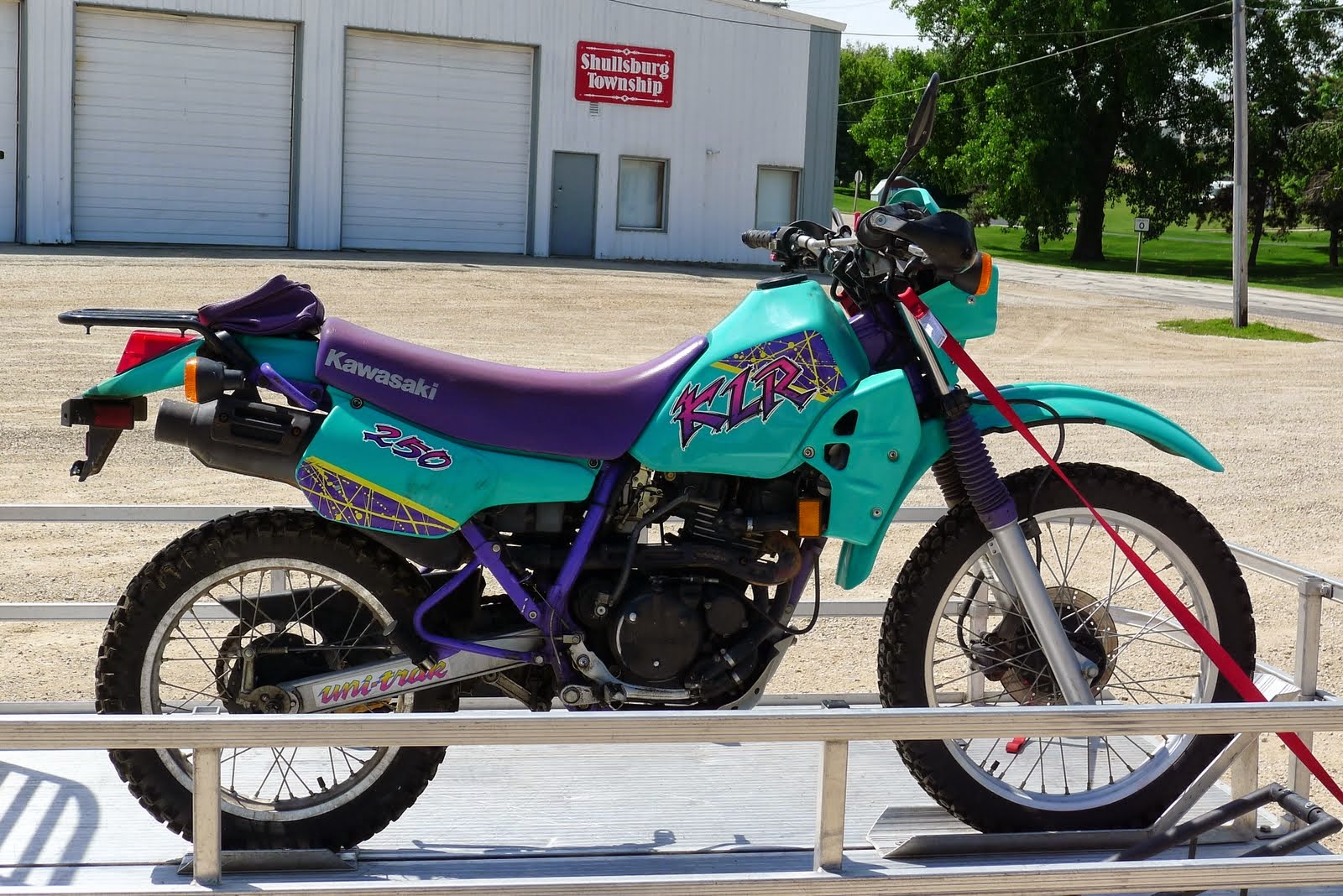 Picked up from a Wisconsin farm within sight of Illinois, the 550 mile round trip last Sunday to bring it home was very much worth it.  Wednesday night I had it out the driveway and down to the corner a few times (2.4 miles) and today I took it to Lake City for some fresh gas.  There are some accoutrements on their way via online shopping that will hopefully make it even more suited than it already is right now for Coop Riding.  I'm pretty excited.

It was a farm bike that hadn't seen an excess amount of "farm" from the looks of things and even though the "Barbie" colors/plastic look actually quite good, some patina is present.  I won't be the first one to put a scratch on it or get something twisted out of perfection. 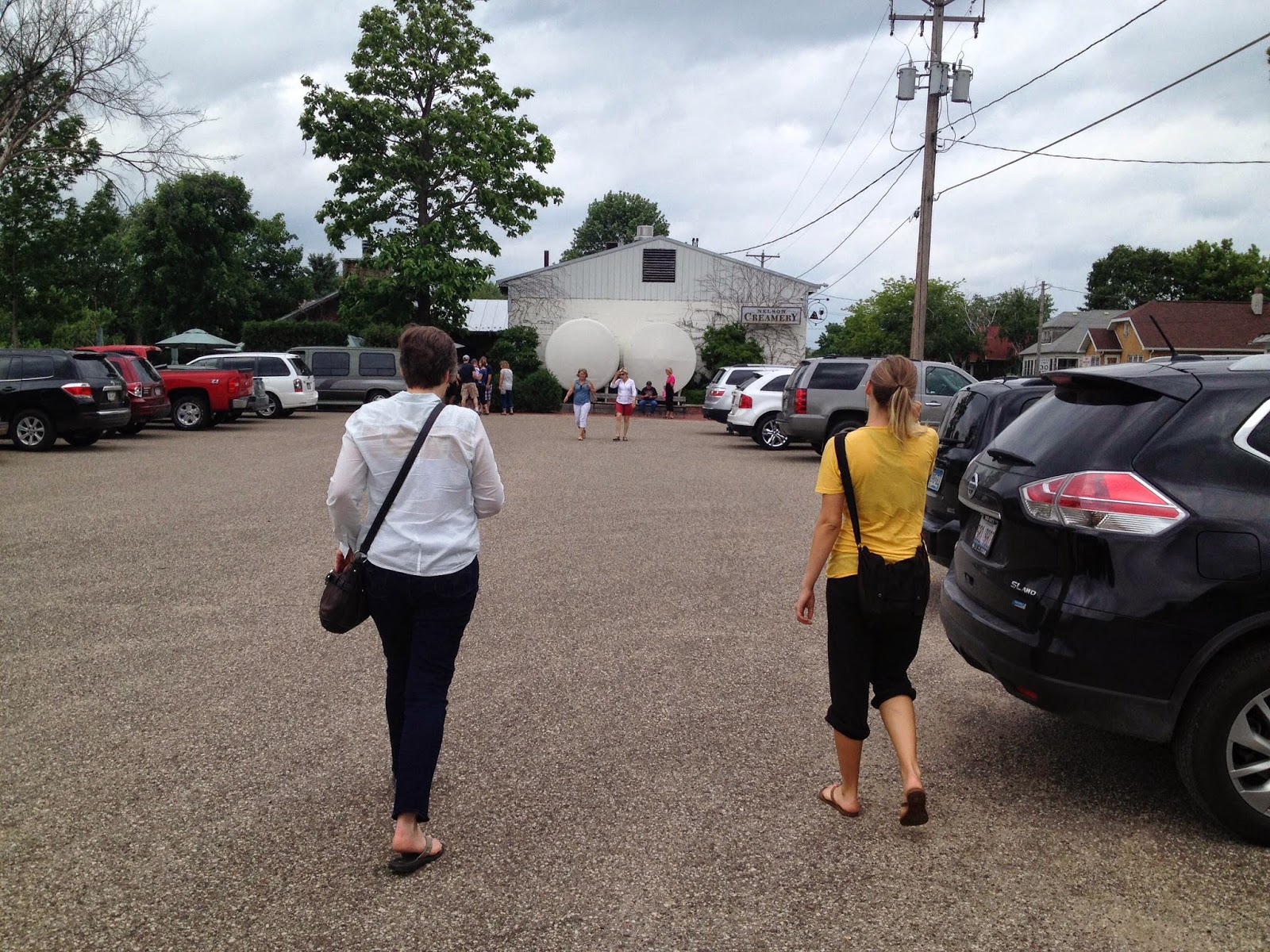 Lauren is back from Georgia, so today we headed down to the Nelson Cheese Factory for lunch to celebrate her return.  We had our food orders in and were waiting for our food to be brought out onto the patio when I saw friend Paul come around the corner, battling an ice cream cone that was yielding to the very warm and humid day.  I tried to do the talking so that Paul could concentrate on his more important task of saving as much as possible of the cone as he could.  A valiant attempt was made; most of the cone ended up where it belonged.

Good to see you again Paul and yes, the driveway has been a challenge off and on the last few weeks.

On the way home we stopped in Wabasha and I hopped out to take a couple of shots.  Remember this back on May 25? 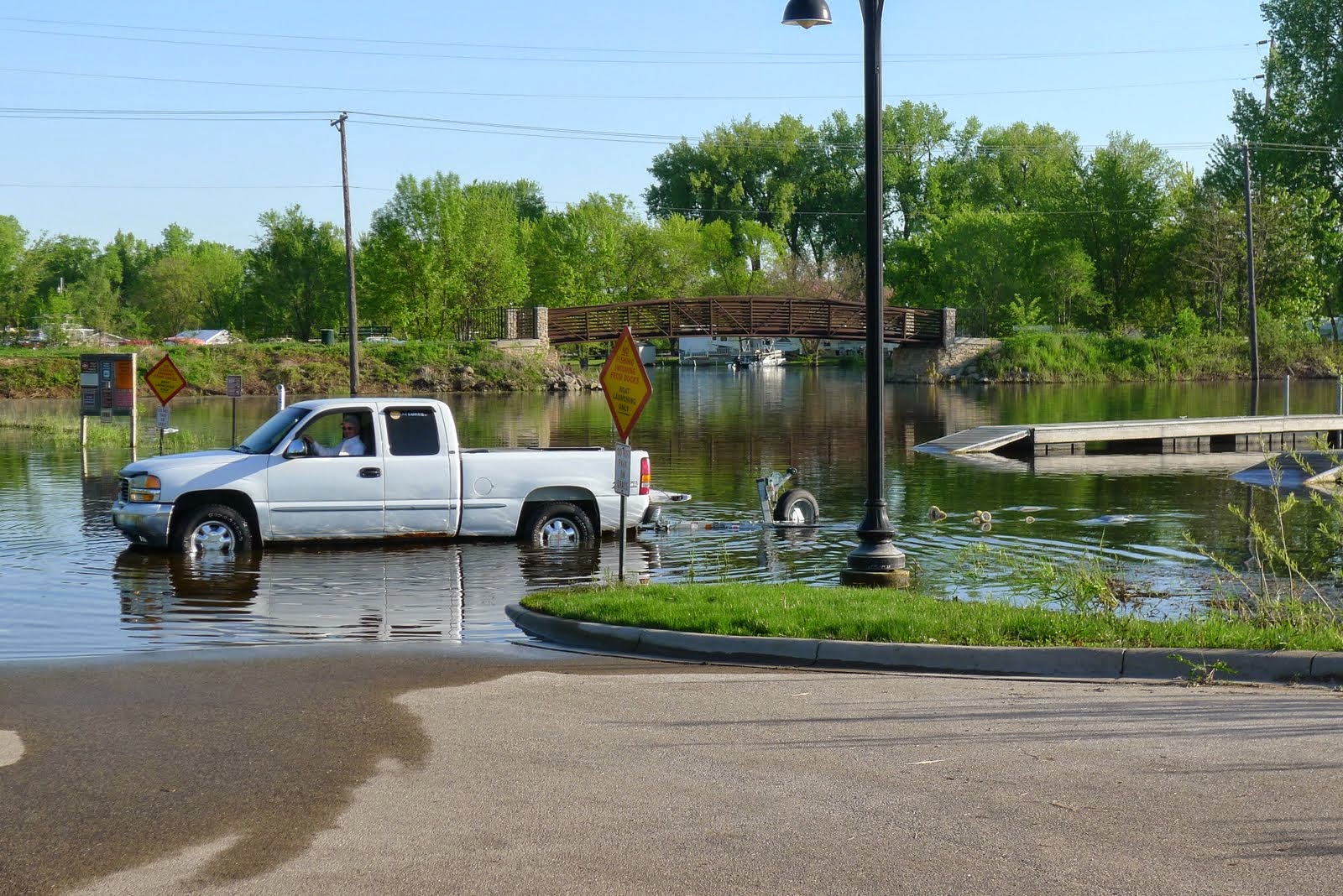 Today it looks like this......compare the water under the distant bridge.  No boats being launched from here this weekend. 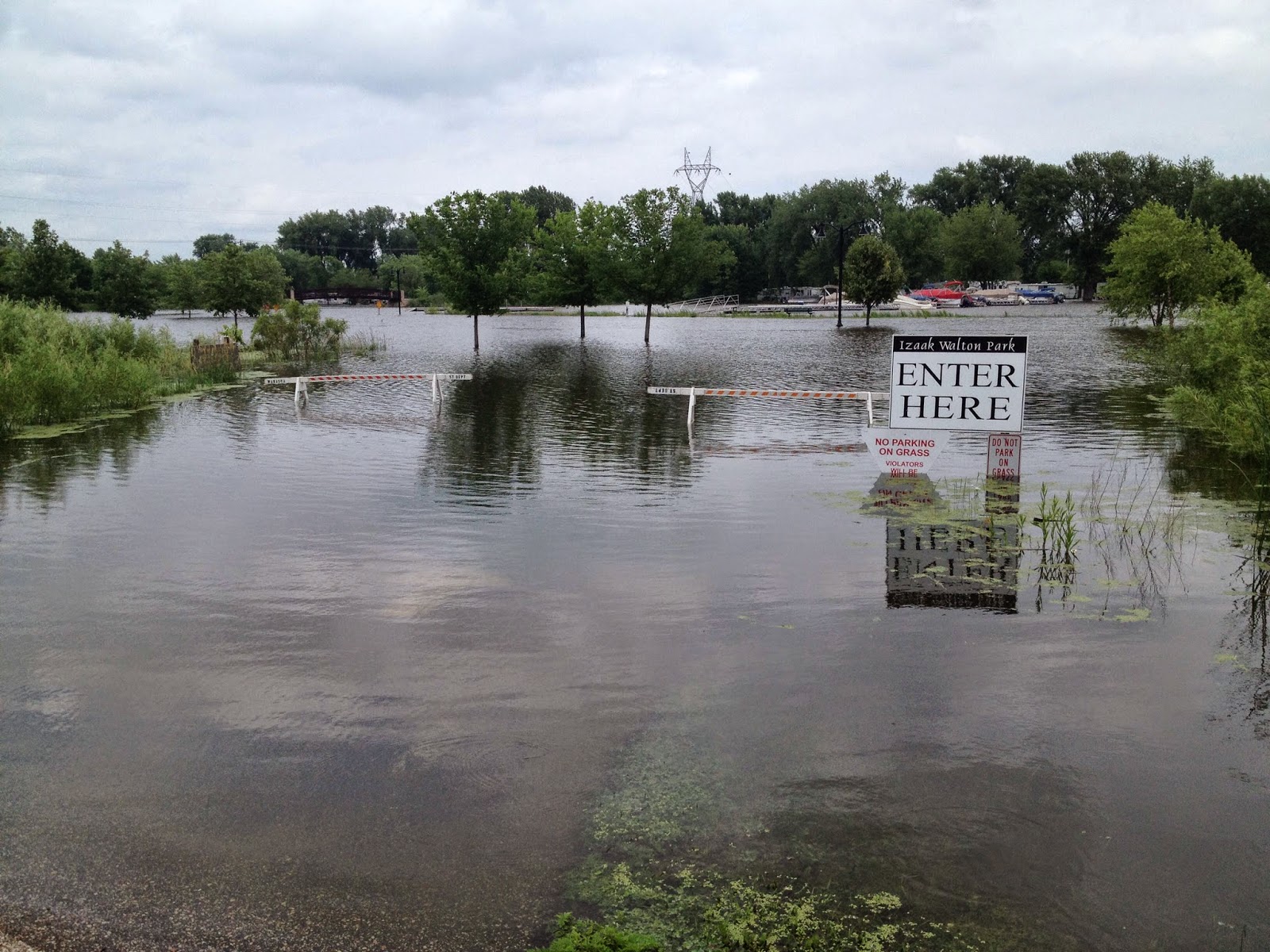 I haven't really had the black Yamaha Morphous out yet this year, so decided to do a bit more Mississippi River Flood inspection, this time north of us to Red Wing. 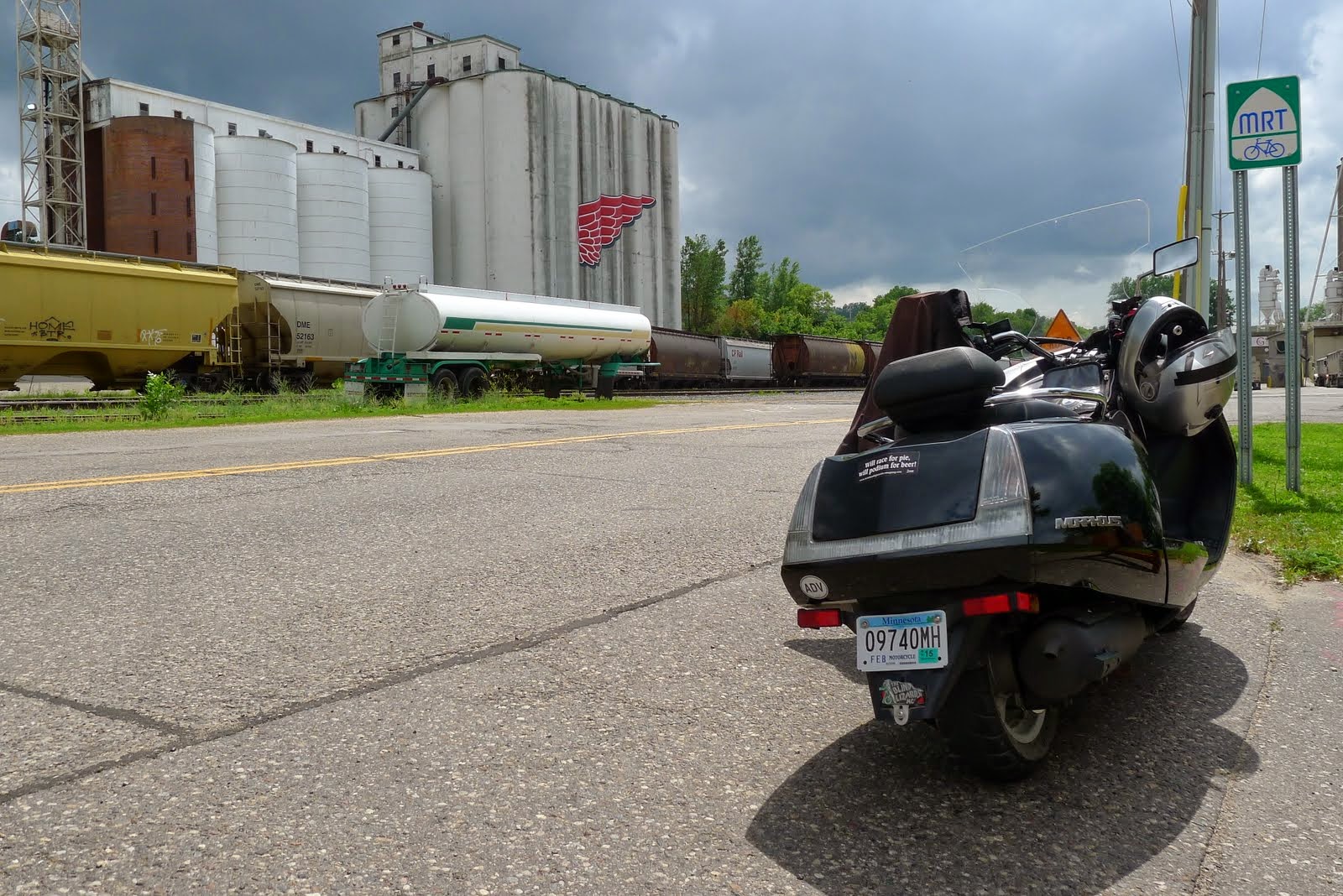 Again, remember this back on April 20? 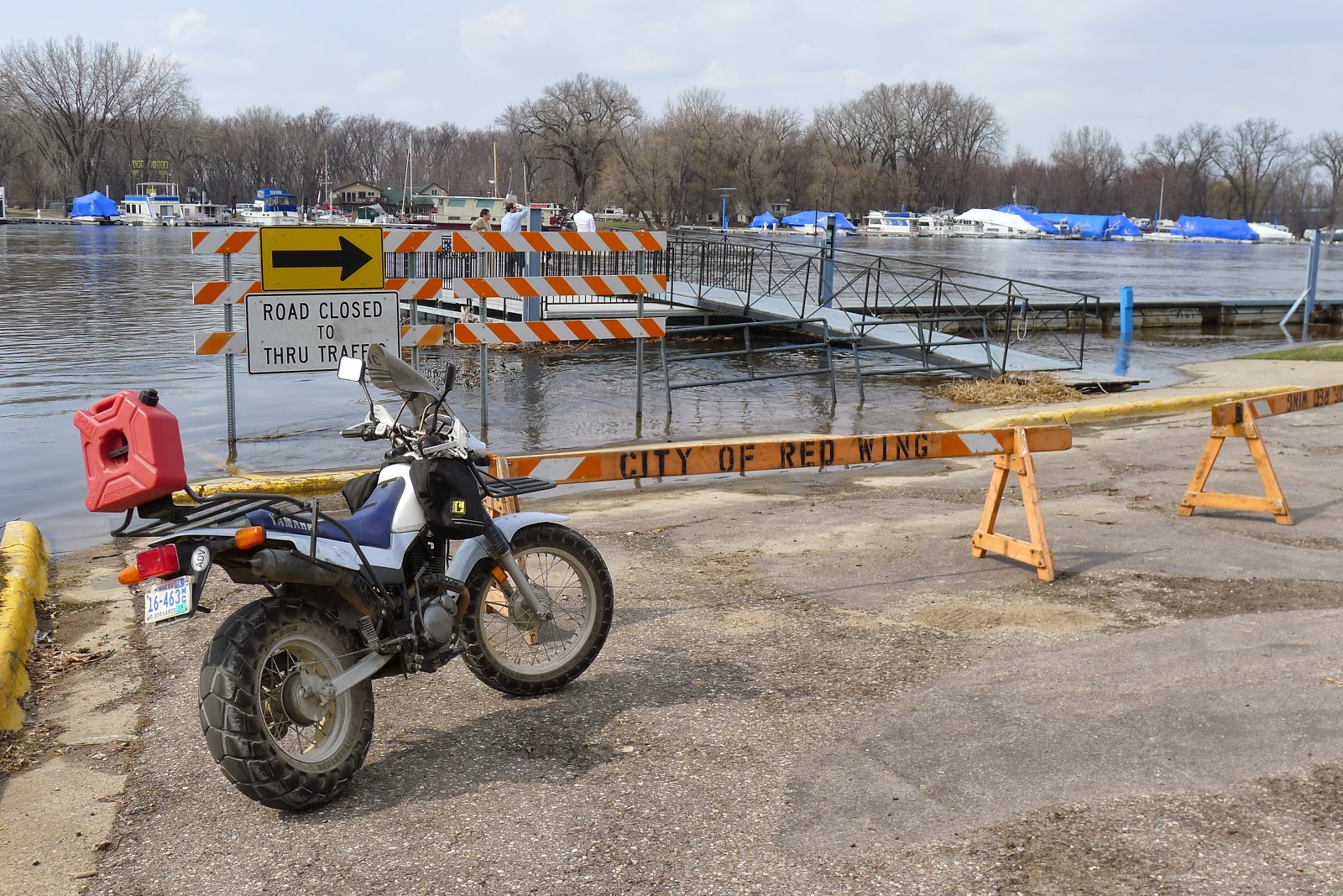 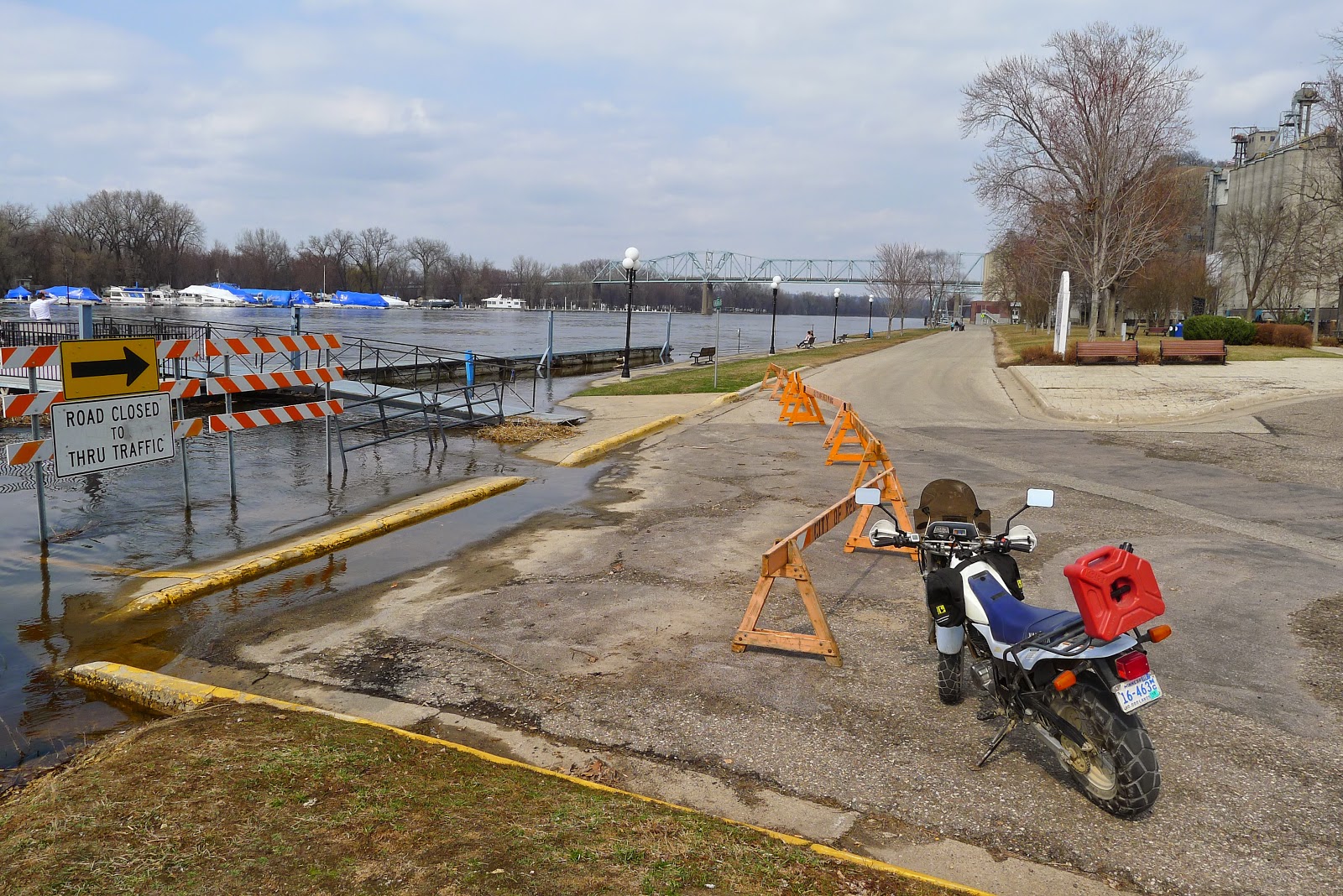 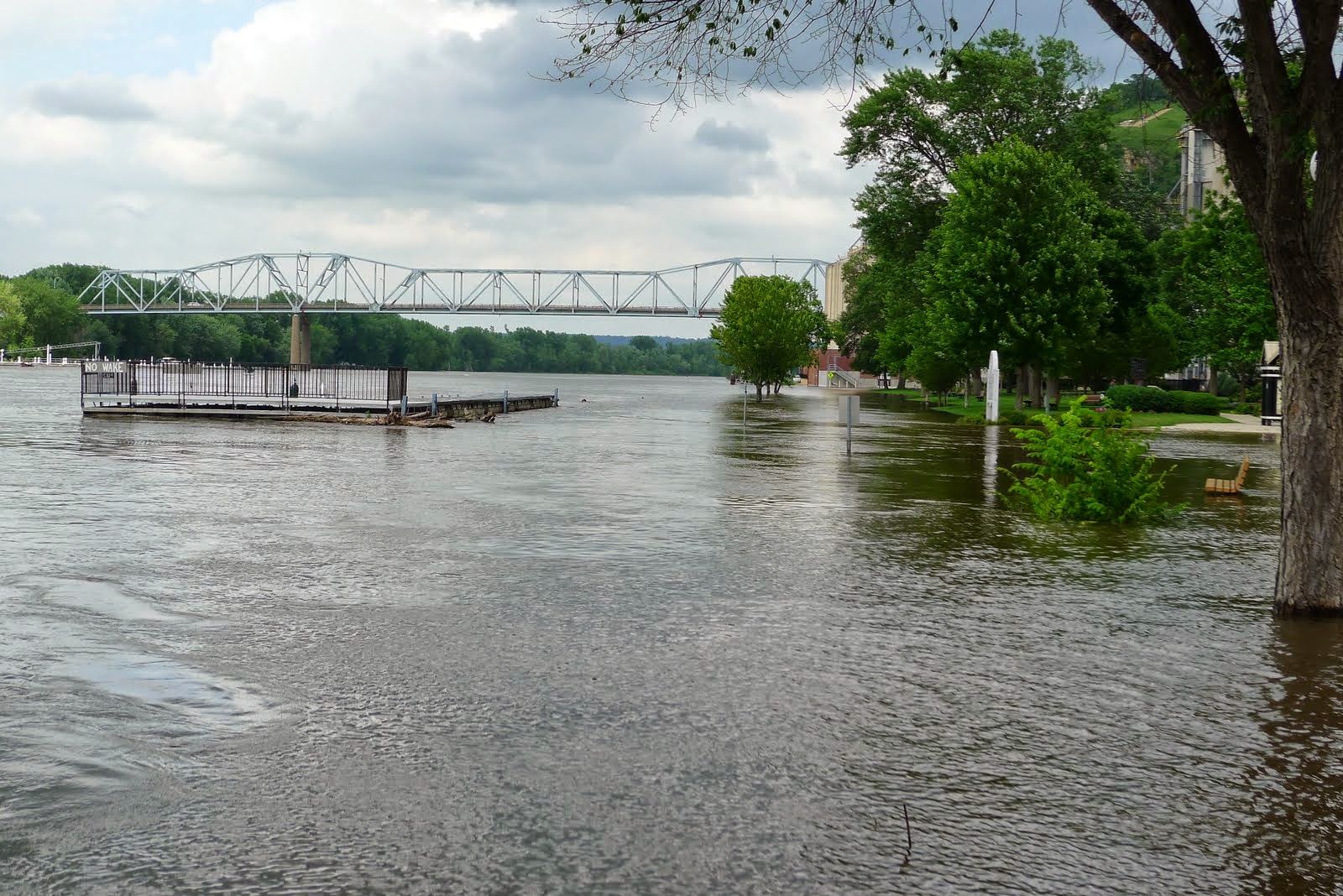 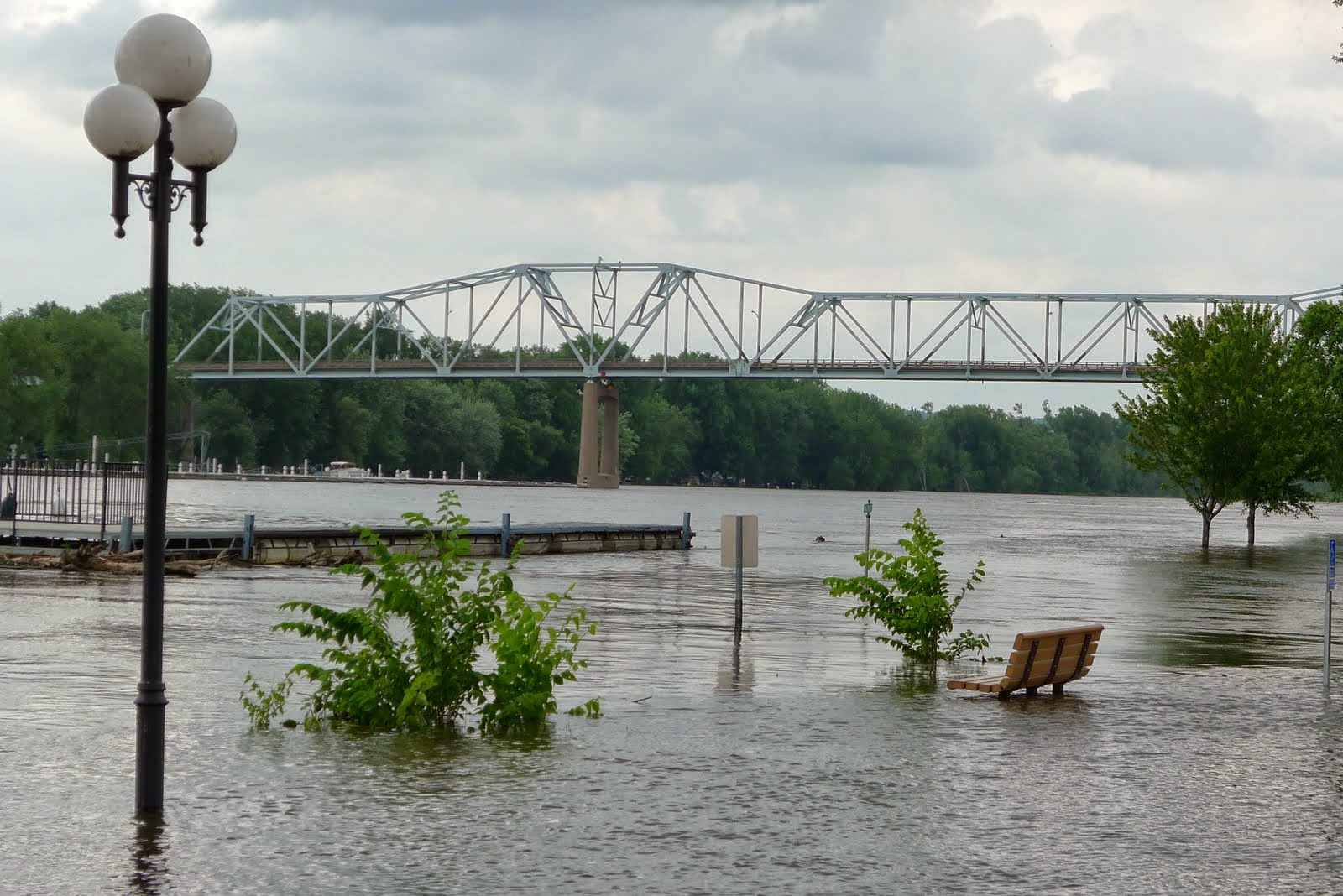 Looking upriver, the river barge empty and waiting to be filled with grain.  The 'edge' of the river is where those poles are for tying off the barges. 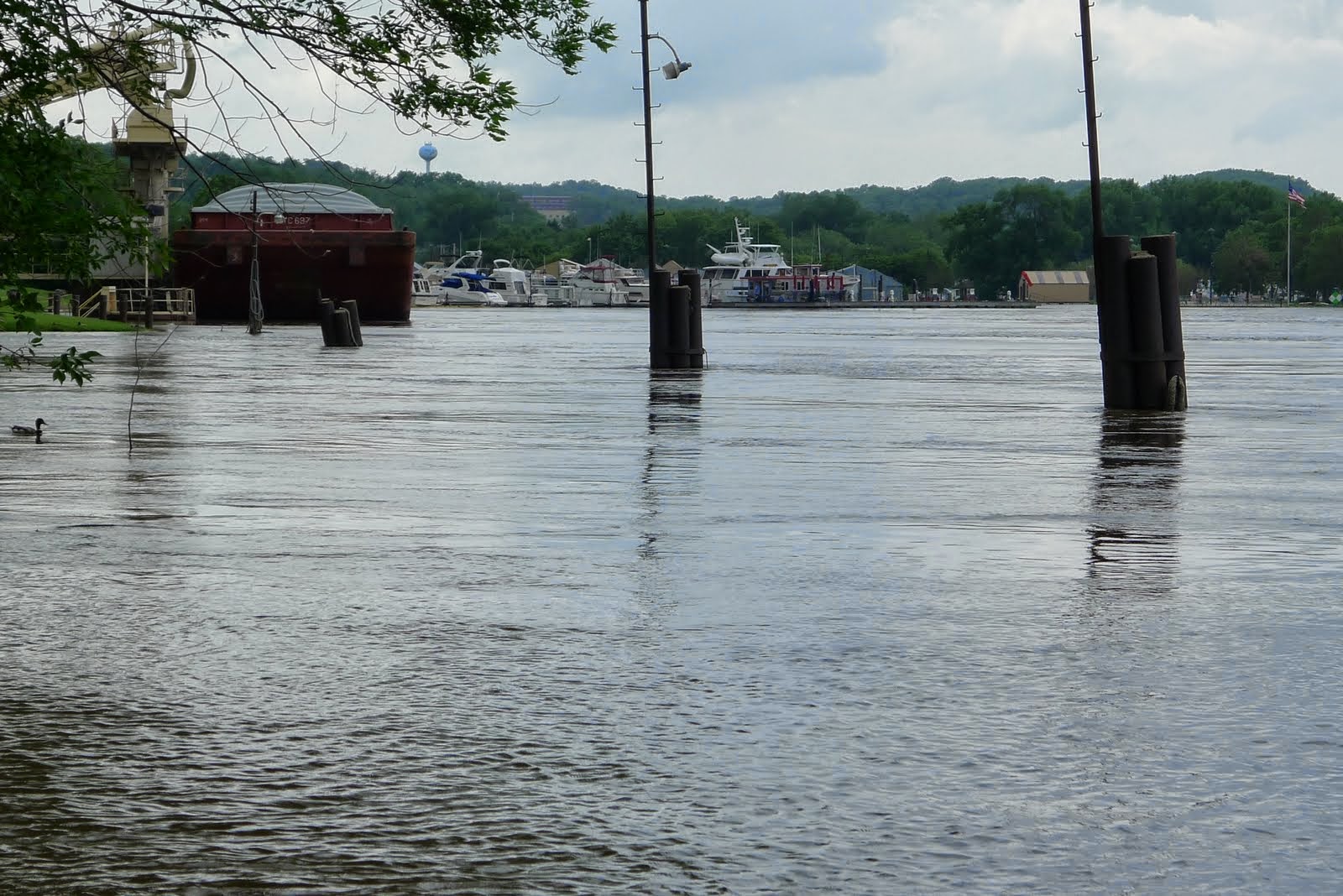 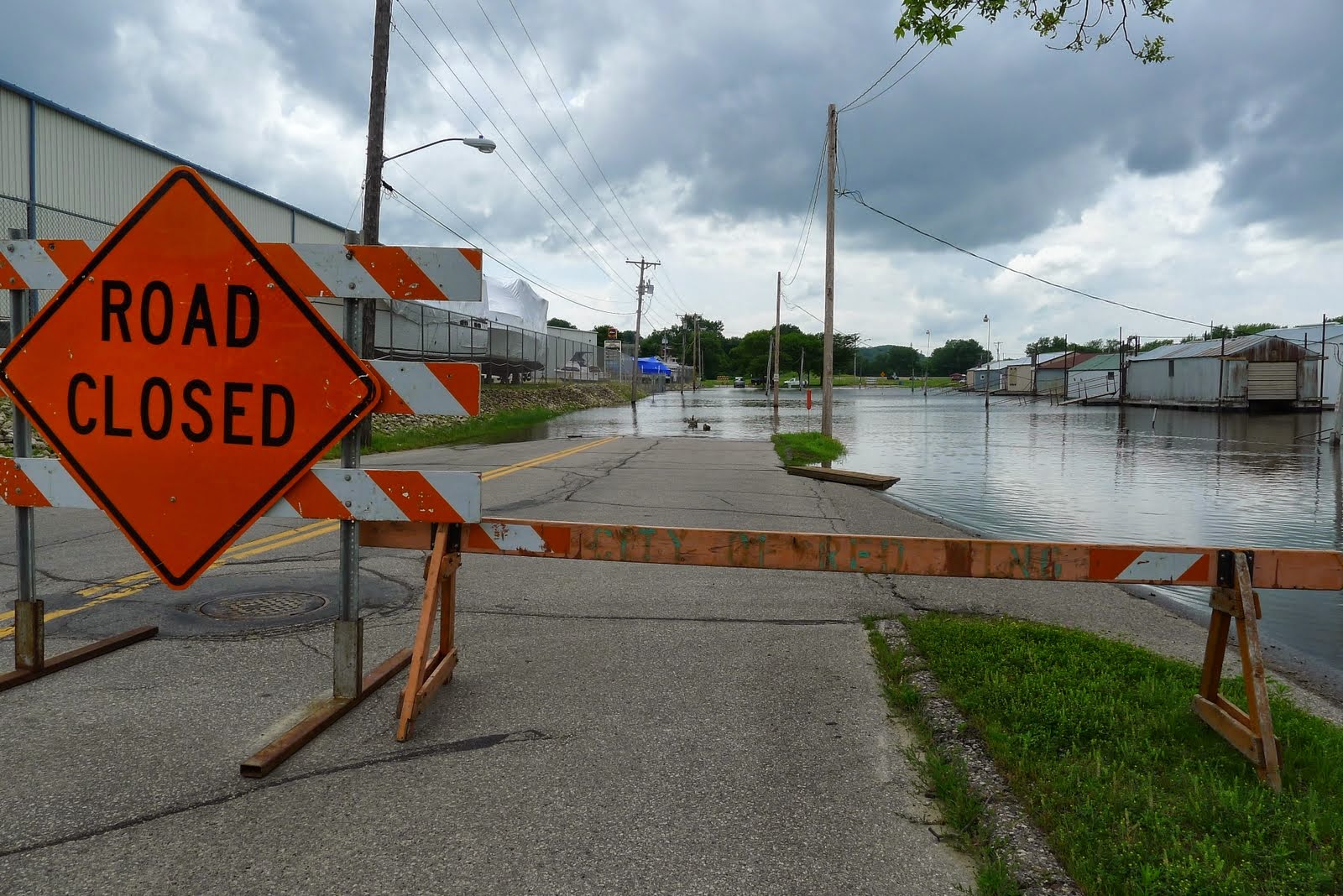 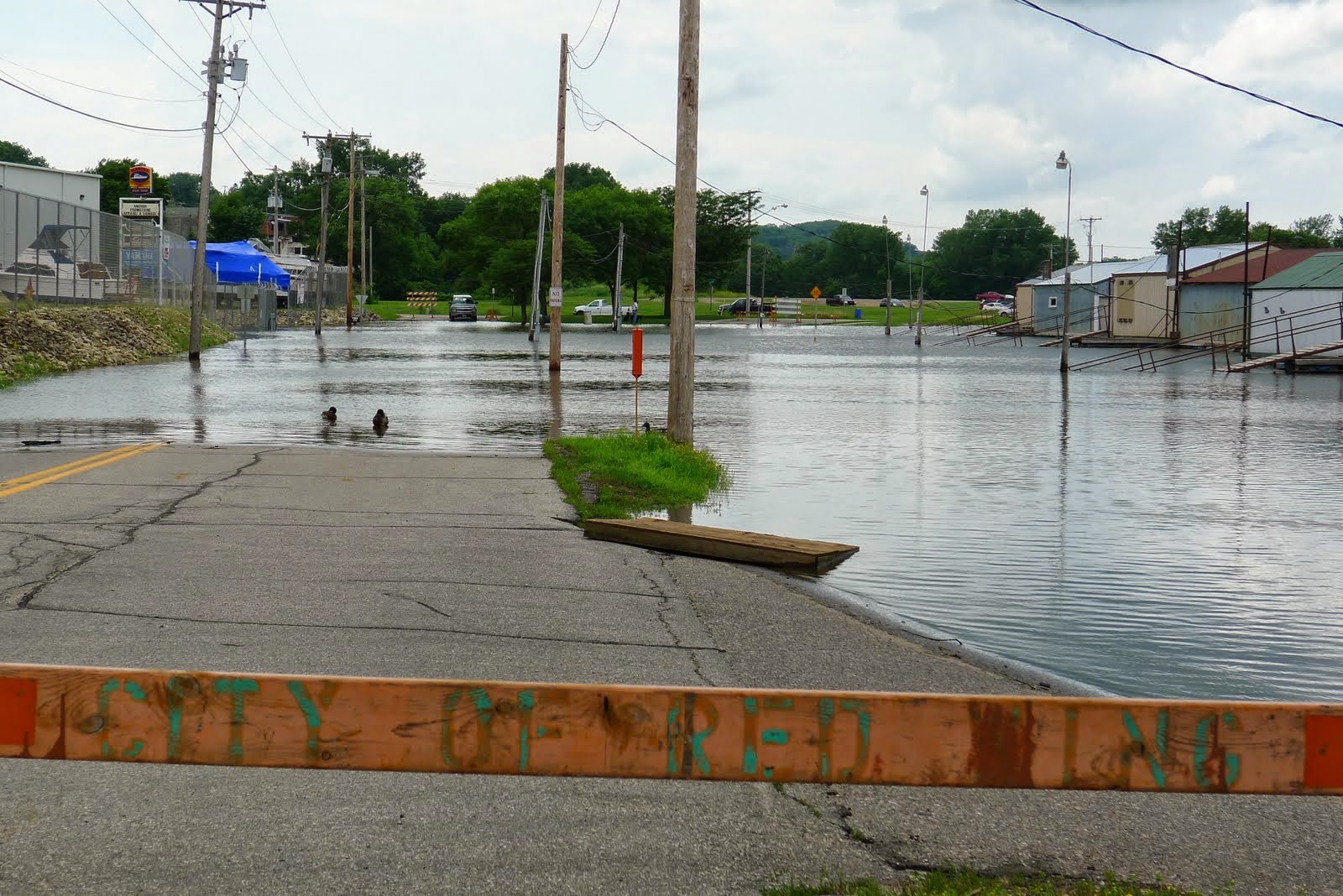