It is not that big of deal but yes, I have been very curious.  Over the last years I've run into (not the REAL run into) another rider in the big neighborhood, a like-minded and apparently often doing-it motorcycle rider.  Funny the things we remember but the very first time I saw the bike/rider was down around Mazeppa at the intersection of Wabasha County 1 and 11.  That was first but there have been dozens of sightings since then, recently even more.

Riding in all weather, he now has shared, ".....down to about 20 degrees....".  I have been on each of my bikes when we meet and always waved when I see the big blue fairing approaching.  Most always those rides saw me in my very faded Darien jacket, my hope was that even if he didn't recognize the bikes the rider would start becoming familiar.  I've even waved from the van, thinking just maybe even without bike, helmet or jacket.

Last year, I just happened to be going through a local neighborhood (he had to live somewhere in the same big neighborhood) and there was the big Indian, out in the driveway, the sight of it brought a big smile.

I finally knew where but not who.

When it was on my way, I'd pass the location off and on, wondering if just maybe the bike AND rider might be outside but things were always buttoned up and quiet.  I've recently learned that may be partially due to schedule and timing.  Larry is an early bird just like me, prefers riding in the early hours of the day and expecting to find him dawdling about in the evening would not have been very likely.

A screenshot from one of my recent blog Posts..... 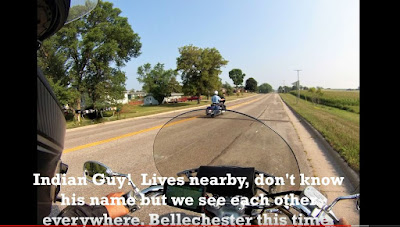 Last weekend, the mystery was solved.  Riding through his neighborhood one more time, there in front of his garage, the bike...and the rider.  After our time conversing, a memory came back to me.  Greg, the former owner of Frontenac Cycle Sales was a friend of both of ours.  I recall Greg asking me if I knew a local guy, "....he rides a lot....".  At the time I did not but was curious about anyone in the area that spent time on bikes. 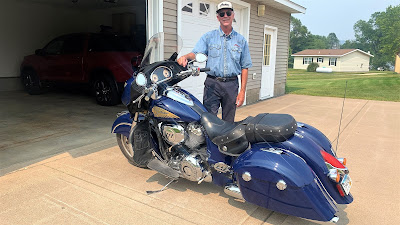 Larry and his 2014 Classic Chief in Springfield Blue.  We had a lot to talk about, more in common than has yet been mutually shared.  I learned that he's had many bikes, has ridden many miles on many bikes and his doing his very best to make this '14 last....he's not sure what he'd replace it with.

Making early day rides, his loops short or long, he enjoys getting out early, a habit from his former life as a southern MN farmer.  He spends time in the area on the same roads I enjoy, apparently for many of the same reasons I enjoy time on them.

The big Indian has been good to him and it looks fantastic, only after he pointed out a blemish here and there did I see a single thing wrong.  I was on the verge of embarrassed showing up in his driveway on the dusty, very dirty and sidecover-free Honda 400 Auto.

He has replaced a belt, stator went bad and as long as they were in there, some new clutch plates.  A front rotor (he doesn't use the back brake) and related pads and of course numerous tires over time.  Larry started the bike so that I could hear it run and see how nicely smooth it was. 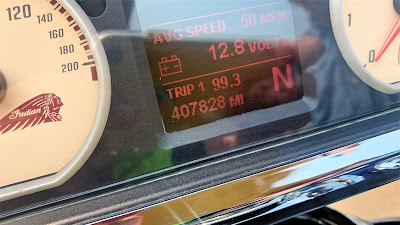 It was a real pleasure to finally meet you Larry, let me know if I got anything really wrong and keep in touch.  Hopefully we'll keep meeting each other on the open road for many more miles to come.