Suggested Reading - "All the Gear, No Idea"

I just finished All the Gear, No Idea, written by Michele Harrison this evening and wanted to share the fact that I thoroughly enjoyed this book.  Normally rather meh to many of the 'Round the World' stories, I freely admit to spending time with a few of the classics and did watch Charlie and Ewan's story about their circle ride.

Available to borrow on my Kindle, access to Ms. Harrison's book was just too easy and the timing convenient since I was between reads.  The premise....a woman, India, Royal Enfield and the self proclaimed fact that she began her travels with a bare minimum of experience all combined to make this recipe one I wanted to explore and I am glad that I did.

Leaving the finance industry in London and anxious to try something new, a circle around India on an Indian-made motorcycle seemed to be the perfect adventure.  Deciding that her bike needed a name, a male name, she picked "Big Thumper".  I very much appreciated her attitude towards breakdowns, dealing with situations totally new and her acceptance of a culture very different from her own.  A number of years ago, a friend of a friend did much the same thing, he between years of Graduate School, on an Enfield as well and from the little I remember, his experience with a former generation of 500cc 'Enfield Bullet was much the same as Michele's was. 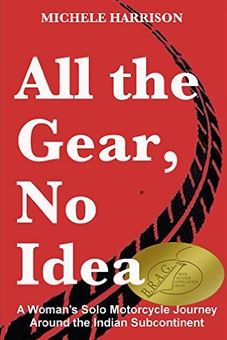 There was a bribe here and there, possibly more tip-overs than even were recorded, of course some mechanical failures, some of them due to her own negligence and/or lack of experience.  With shorter, easier to care for helmet-hair, she was often mistaken for a man, something she both grew tired of though took advantage of at times as well.  In the Epilogue, written almost 15 years after her adventure, she's perfectly willing to acknowledge that luck had definitely been on her side for this trip.

A few sentences from her book that especially caught my eye causing me to downshift a couple of gears....

......I could be criticized for being a dreamer and a time-waster.  For some reason, the act of sitting on a moving motorbike is seen - by me at least - as a valid occupation.  So maybe that was the real reason I traveled alone: I like to daydream.
Of course, I could also come up with some more worthy - and also true - reasons: alone, I become more observant, meet more people, do not immediately vocalize my opinions and therefore perhaps judge less and experience more.