Monday evening (Day 3 of 4), I was diligently Route planning for the 2 GPS units (more on this in a later Post) that I had along, redundant Routes so that I could use/compare how each satellite receiving device would handle my zig-zag exploration.  Through the course of Monday afternoon, much thought was given to which direction I'd head, destinations that I'd seek out, etc.  Many things were considered and then finally, I buckled down and created my next day's ride.

That was at slumber time on Monday.  By wake time on Tuesday, plans were altered.  Considering my location in SW (almost South Central) Wisconsin, heading east to visit a couple of friends between Madison and Milwaukee (SE Wisconsin) was suddenly the new and improved ride plan for the day.  Gene and John are old rally friends that I see off and on each summer at the various brand rally gatherings.  Now that the end of our riding season's are coming up, it may be a long time before I get the chance to see them again so a personal visit was decided upon.

First a call to John, and then to Gene got things organized.  I rode east, into a bright but I'm-not-complaining sun where I was to meet John in Waterloo.  John picked a rendezvous time perfectly based on my called-from position and I nailed our meeting time.  From there, I followed, he in his TDI to Gene's place in Watertown.  This is a section of Wisconsin I've spent the least amount of time riding in.  It's typically more urban, less hilly and the roads much straighter.  I think we'd all agree that the riding is better to the west.

Based on Bob's and Dave's (two other guys that I mingle with at these outings, both close to Gene and John) suggestion, I rode through the Roxbury crossroads to stop at the Dorf Haus.  A German-themed supper club that serves, according to Dave, the world's finest pancakes, the place was very quiet at 10AM on a Tuesday.  Sunday's are breakfast pannycake days so my timing was off for the delicate monsters, soaked in honest-to-goodness real maple syrup.  Instead of a Sunday Coffee, looks like we'll have to arrange a Sunday Pancake. 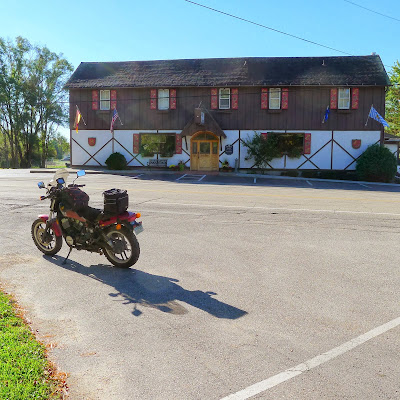 It was great seeing, sitting down with and discussing the same sort of things that we talked about last time and will talk about the next time....it's just that letting the gaps between those same discussions get overly long is less than ideal.  Guys, I'm happier than you know that I called and made the trip over; glad that it worked for us to get together again.

Following John's advice, leaving Watertown, I went north up to WI #60 (that didn't quite go as John advised) and then following State 60 back to the west, I blended perfectly into County PF as John did advise, a road known to any and all decent Slimey Crud attendees.  Thinking I might seek out Martha's nearby Lodi wilderness hiking area on the way, I changed my mind and kept on going, my next stop at a much quieter, weekday Leland.  One of the bar owners was out spraying the exterior for box elder bugs; a few cars in front of his establishment.

No people, no motorcycles....well, one motorcycle. 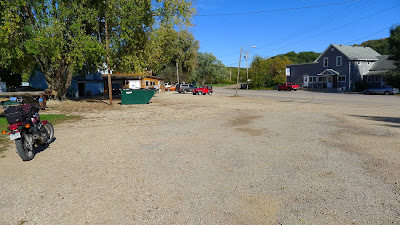 The pond is still there.... 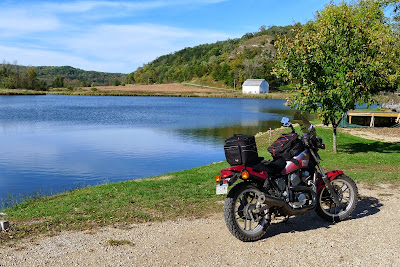 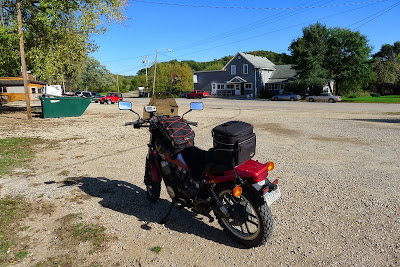 Across the road, another park area beyond the pines and where the "Beer Here" sign was on Sunday. 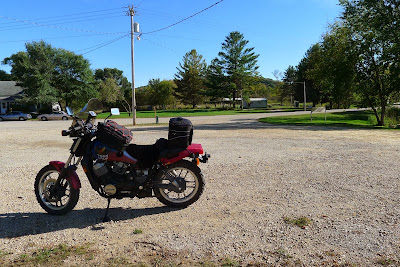 The pond from the other side of the barn. 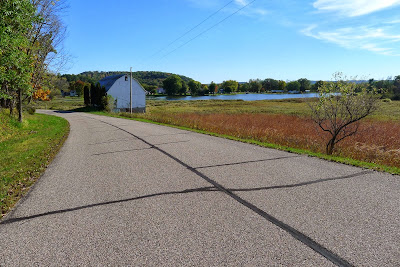 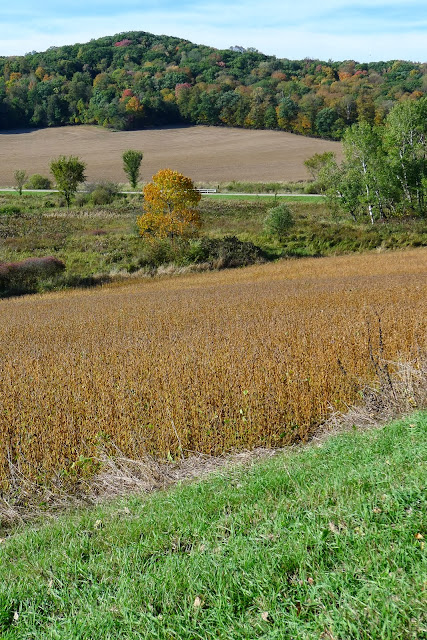 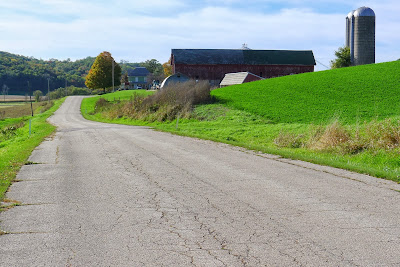 Peek-a-boo farm; in a couple of months it will easily be seen from this spot on the road. 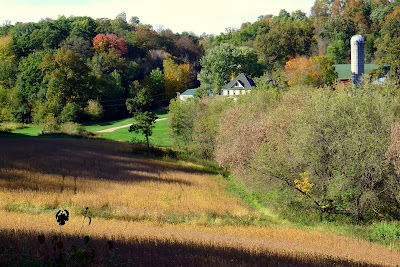 The road through the cut.... 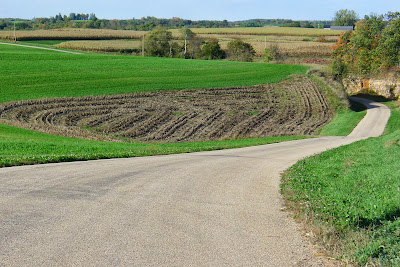 and a bit to the left, a natural amphitheater, the picked corn on stage. 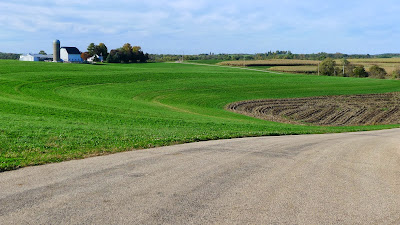 Almost back to Richland Center; I'm still behind the distant load of hay after following from up on the hill. 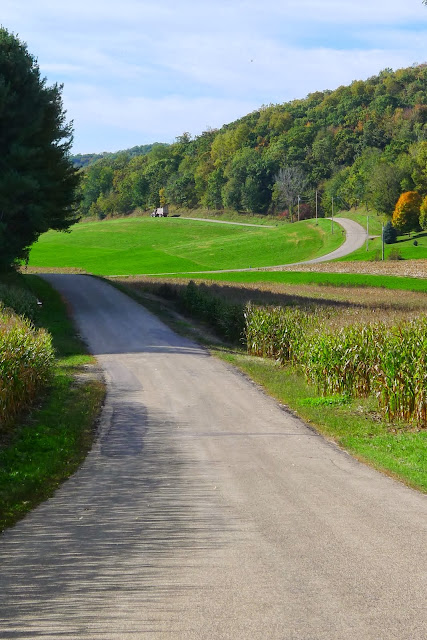 Just outside of downtown Neptune on Dogwood Hollow Road. 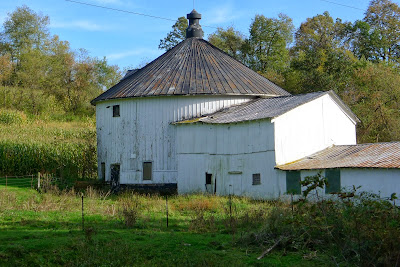 Back to the car, the Honda soon to be tied down and moving under something else's power.  My stay at the Starlight Motel (sign across the highway) was a very pleasant one......I hope to do this again. 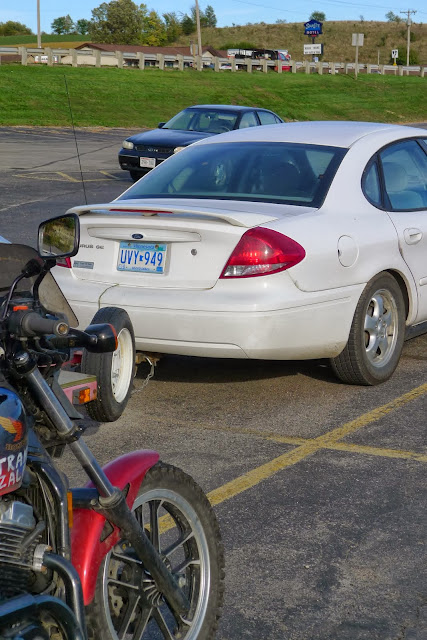