A Long Short Week And An Even Shorter Weekend

You'd expect that a 3 day workweek would have passed quickly but it felt like one twice that long for some reason...maybe I was simply still full of too much Holiday Spirit.  Our turkeys are even more present, today there were 5 in the tree at one time; the one below running back and forth gathering what the others were carelessly dropping. 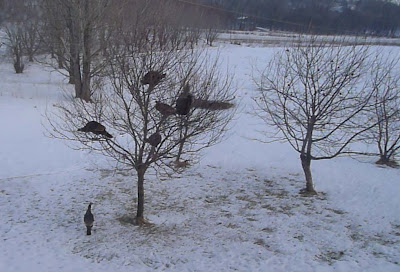 I didn't see this happen, though maybe was the cause.  Wingtips in the snow and evidence of a hasty take-off?? 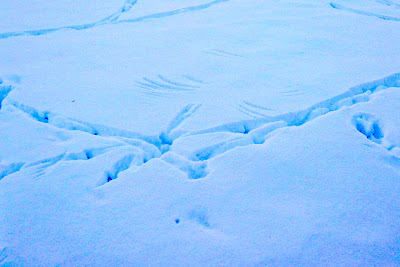 The season's ride planning has begun, both the short and long ones.  I've been trying to do a central Michigan tour the last couple of years and it hasn't really worked out.  Thinking it might finally be an option last fall changed when all my vacation days were used up for other unplanned events. 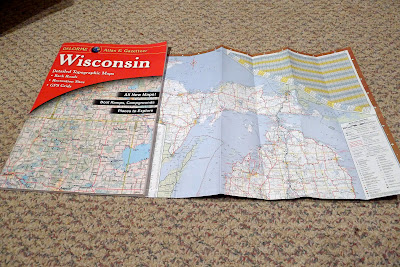 Last week the "Michigan Travel Ideas" packet arrived and was opened with glee.`As I was reading through the guide and focusing on some potential 'targets', I was made aware of this year's Moto Guzzi National Rally in Lavigne, ONT.  So, not only was a new, updated Ontario (I've already got one a few years old) Travel Planner ordered on Saturday, but then later in the afternoon on the phone with Gene I learned of this year's BMWMOA National to be held in Salem, OR.  Now that I'm an honest-to-goodness owner and a former MOA member, this one sounds tantalizing.

Those are at least some of the long trip potentials though I'm not embarrassed or afraid of planning weekend rides that are much more local.  We do have after all, some very nice riding within 200-300 miles from home.  Plans are already firming up for a meet-up with Jeff on his CR230 Honda.  I'll meet him on the TW200 and we'll explore some of the more rare, gravel and Rustic Roads in the southern parts of Wisconsin.  Finding rural gravel in Minnesota is mere child's play, but in southern Wisconsin, where even small lanes are paved, it's a bit more work.  I know where the good ones are and hope to share them once spring arrives.

Then there's always the almost world famous "Doug's 85 miles of Gravel" ride that loops out from our home, using those aforementioned plentiful MN gravel roads.  90% of the ride takes place on non-paved roads, makes good use of 4 Minimum Maintenance roads and never gets further than 20 miles from our home.

Days are getting longer, gas is cheaper....wouldn't it be nice if these trends continue?
Posted by Coop a.k.a. Coopdway at 5:26 PM