The Year Of The Tire??

Last year I had more than my fair share of chain issues...this year it seems the trend has been to tires losing their air pressure.  Not only have I been replacing tires (yes, the result of overflowing pie charts) but I've been having to cut rides short and trailer machines home. 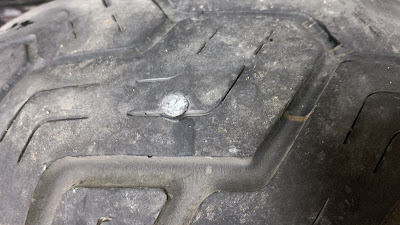 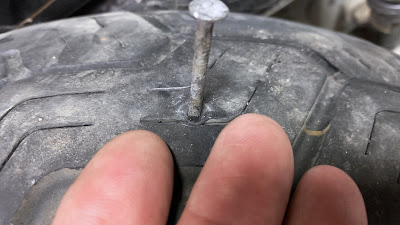 This was the Plan...4 Southeast Minnesota State Parks, 3 of which I'd never visited before.  It seemed like a perfect loop. 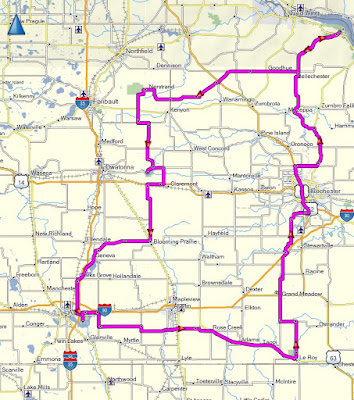 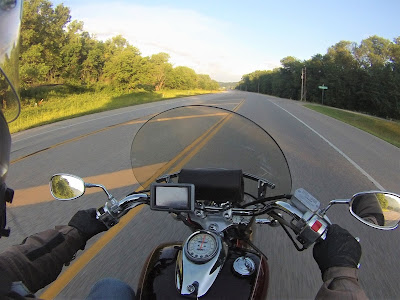 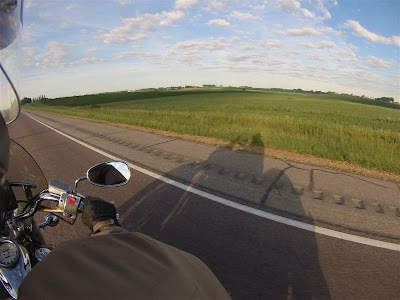 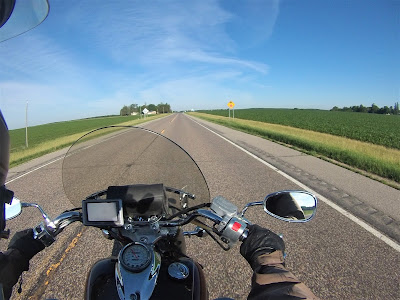 Another squishy ride being confirmed...wasn't just the pavement. 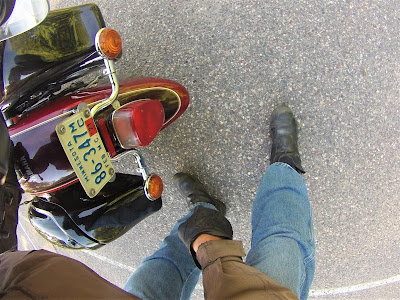 As far as I was able to make it. 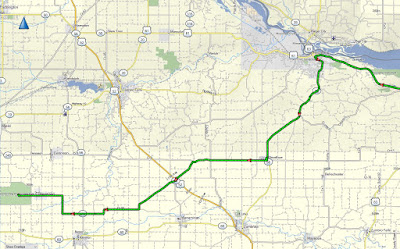 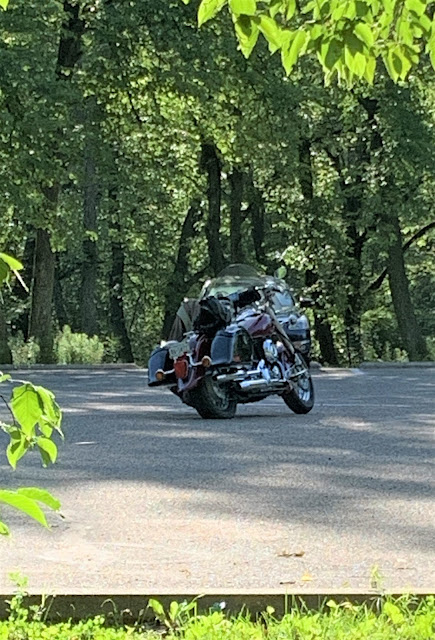 Called AAA, a long wait reported, after I heard that due to Sharona, there would be no riding with tow truck drivers so it was up to me to arrange transportation while waiting.  I decided to call Peg for help...."on my way..."  Figured I'd try again, to at least get the bike hauled so that I wouldn't have to come back for it, more wait time so I was advised to use the online App.  I downloaded it but there was no allowance for the RV Premium coverage that I signed up for this year.  Then I learned that I could text for help, which I did and heard no response.

Peg came to pick me up, we went back for the van/trailer and she joined me for another trip to help push the midsize VStar on to the trailer.  I had the presence of mind to bring the air tank, but we had only a minute or so of push time before the tire was once again flat on the bottom, so it was a rushed trailer loading operation.  The Nerstrand Woods State Park was very happy to have my bike out of their parking lot....must have been one of their busiest days ever. 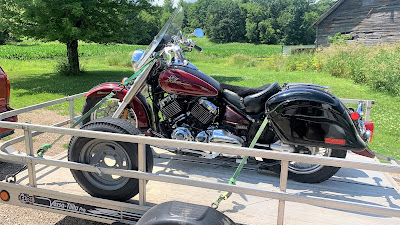 I worked in central Iowa most of last week, just off of I-80. 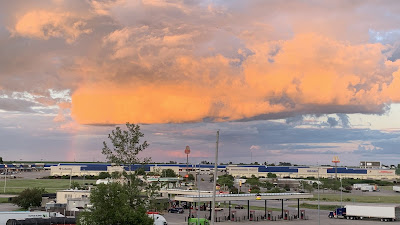 Windmill construction was going on everywhere, every phase of it.  These guys were at the same motel that I was. 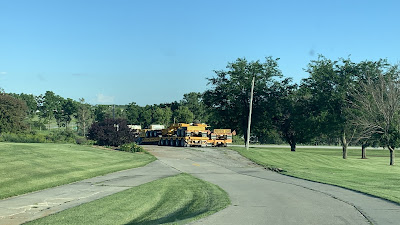 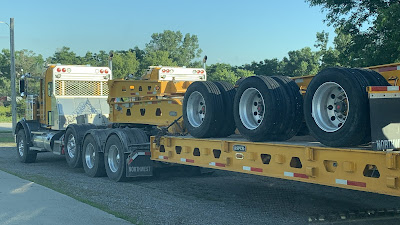 Lots of Big in Iowa.  Most of my recent trips through Iowa have had me passing through and/or ending up very near to Waterloo where John Deere has a lot of history.  John Deere isn't the only farm equipment manufacturer in Iowa.  I drove past the Kinze operations everyday, very disappointed that their Information Center was closed or I'd have been in their museum, possibly more than once.

This Standing-In-Air display very prominently seen from the Interstate.  A (large) green/red tractor at the planter's base. 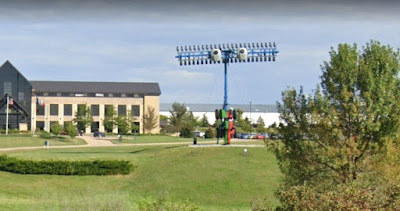 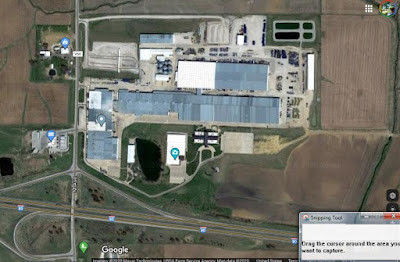 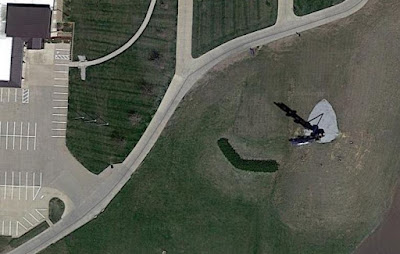 This photo from Street View on the Exit Ramp view of their grain cart, an old image because currently they've got multiple carts stacked up tiny on top to huge at the base. 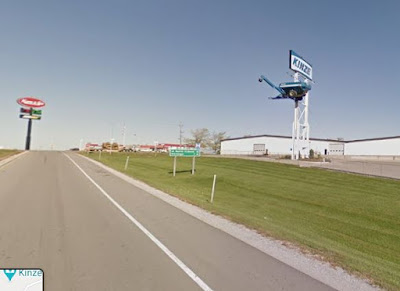 A week ago Minnesota officially lightened up, just a little, the rules regarding visits to senior health care facilities so Friday I signed up to visit mom...across a 6' table.  Masks all around, temperature taken, releases signed, questions answered.  We speak almost daily, I drop off groceries weekly but we haven't seen each other since early March. 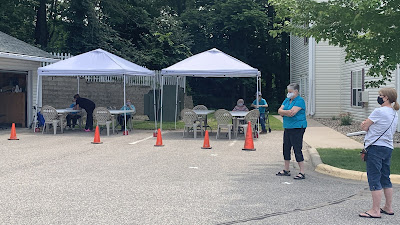 Finally, more birds.  These young barn swallows were a joy to watch on the temporary railing at our back deck.  Four of them, waiting between practice flights for mom to bring more bugs.  Hard to see in the photo but they've got little fuzzies around the perimeter of their heads, just like old bald men with the fringe around the 45th parallel.

Number 4 is down the railing distant.  Watching them bird-walk up the angle was the cutest thing.  They'd disappear and I thought they were likely down in the grass but no.  A few minutes later they'd come flying back, waiting for mom to stop in with another supply of food. 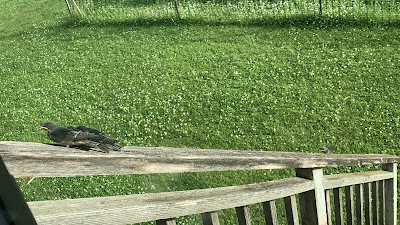 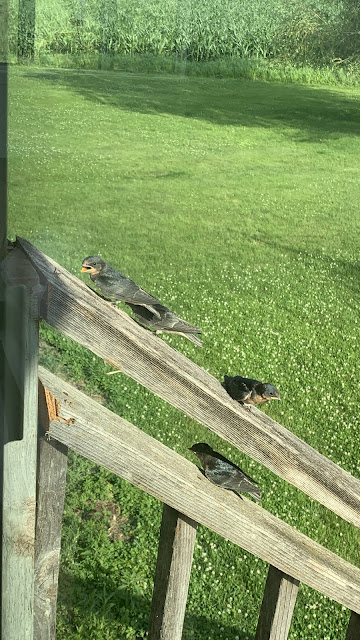 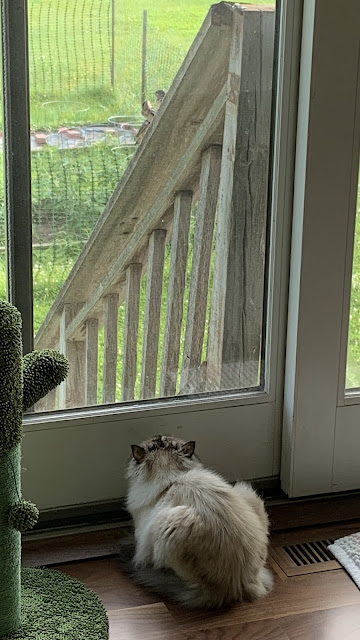 Sunday morning I met Mark in River Falls for breakfast, said "No" to pie though. 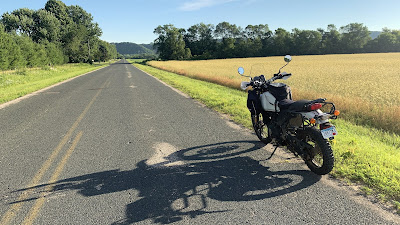 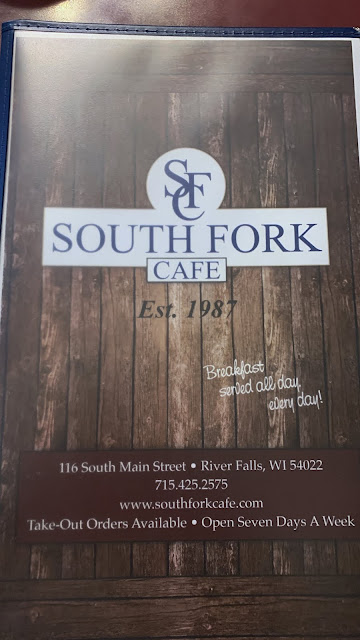 I'll bet that you can appreciate my sacrifice. 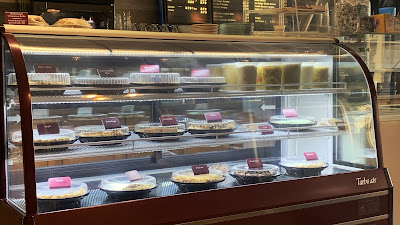 A very special request was made to come into the office Sunday afternoon for a demo.  A current customer was simply too busy to visit our showroom during the week and really wanted to see one of our 5 axis machines in action.  I obliged and was there to show it off with no plans to make this a common occurrence. 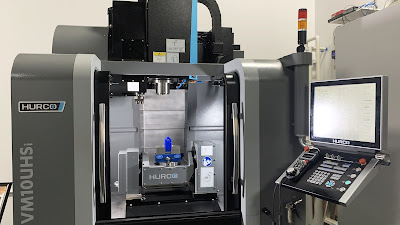 Some vacation time coming up and quite naturally, there will be some devoted motorcycle time.
Posted by Coop a.k.a. Coopdway at 3:03 PM